Even though I grew up in Michigan, I had never heard of Fordite until I read the Saginaw based novel “American Poet”. Then during the summer of 2014 I saw some Fordite (both “raw” and jewelry) in the gift shop at the Ford Museum in Dearborn, Michigan. And then this past summer (to my surprise) I got to see some for sale right downtown in my hometown of Traverse City. 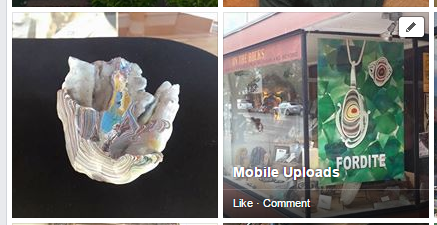 Yellow paint (especially the shade used for American schoolbuses) would have been chrome yellow - chemically lead chromate, or a delicious blend of cadmium yellow and cadmium orange.

Do not lick the bus.

Tufts has a cannon that gets painted pretty much every night: 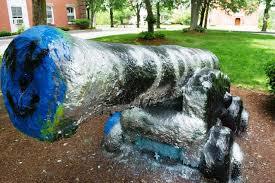 Same deal. It looks all wonky because the paint has made the proportions go funny.

Back before they started putting high fructose corn syrup into everything; we used natural sweeteners!

I originally thought you said Tufte has a cannon that gets painted pretty much ever night.

The Anthropocene is a proposed epoch dating from the commencement of significant human impact on the Earth's geology and ecosystems, including, but not limited to, anthropogenic climate change. As of August 2016[update], neither the International Commission on Stratigraphy nor the International Union of Geological Sciences has yet officially approved the term as a recognized subdivision of geological time, although the Working Group on the Anthropocene (WGA) voted to formally Various different st...

No one knows how big or small the actual rock is:

If there even IS a rock!

See also “Leland Blue” – another “mineral” made of industrial waste. Remarkably pretty, these artifacts of the machine age. I have a pendant that has both Fordite and Leland Blue in a silver setting. Geek adornment at its finest.

concentrations of more than 20% are common.

Yikes! Thanks for the link. I had no idea it was that bad. Sure, I thought there was probably some lead in the paint but… dang.

So in your tireless effort to combat…uh…bad(?) reporting, you went to wikipedia, copied their text, and placed it into your reply. To mimic the text block that’s already in the OP. Which was quoted, and attributed to “JWZ”. That’s some “awesome reporting” [ed: caps removed for emphasis].

Here’s an idea…why don’t you (WHAT? SHOCK AND HORROR) do some reporting to find out the deeper sociopolitical meaning of “Fordite”, and then fill out the wikipedia page on it (given that WP is, golly, a user-built knowledge set).

But that would be tough on the ole’ noggin, huh? If anything, you must certainly be disappointed in this stunning lack of reportage. Would you say you’re disappointed?

When I saw that photo I first thought it was some psychedelic red velvet cake. So disappointed.

It turns out that Detroit agate has over 250x the power of powdered rhino horn as an aphrodisiac.

Detroit agate has over 250x the power of powdered rhino horn as an aphrodisiac.

Of course it does. These beasts are already extinct.

I would love to own some fordite if it wasn’t so outrageously expensive. Has anyone tried to manufacture an imitation of it? I don’t care if it’s real fordite or not, I just want something reasonably priced.

But that would be tough on the ole’ noggin, huh? If anything, you must certainly be disappointed in this stunning lack of reportage. Would you say you’re disappointed?

BoingBoing can never disappoint; it can only be disappointed.

Has anyone tried to manufacture an imitation of it?

I’ve seen some Fimo (polymer clay) jewellery that looks similar. Googling ‘faux fordite’ comes up with quite a few results.

I’ve seen it used both in Science and Scientific American, and without quotes.

It’ll probably have hexavalent chromium in there too. So don’t go snorting it either.