I think you are right, and they are all standing behind the banner-holder on the right. Maybe in a line about 10-15 yards back. That is the dead spot on the field you never see in any of the camera shots.

Here’s a frame grab after Franz walks back to center in front of the platform. Do you honestly think that there are 30 people kneeling behind that tiny bit of tarp hanging there? No shadows except what should naturally be there. 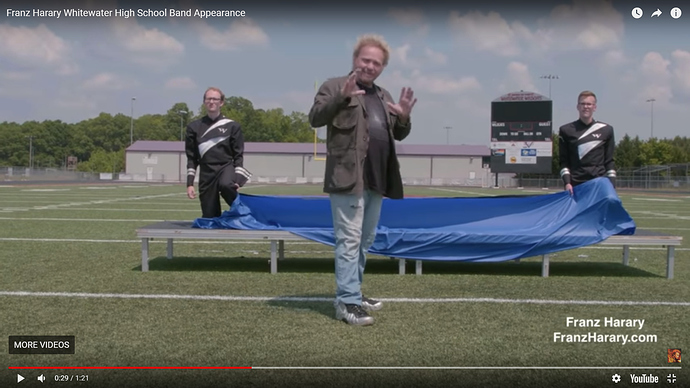 Yep, I honestly do. Line of sight is a wonderful thing to behold when it’s done well.The bottom of the platform cuts off our vision about 3 yards away from it. Above the tarp you can see the marker at midfield. There’s about 30 yards of field hidden in that small strip you can’t see. There’s a whole bunch of math that can show how much volume is actually in that hidden area, although I’m too lazy to look it up and try to figure it out (there’s a tangent in there somewhere I’m sure… eek…)

I’m happy to hear other suggestions, though, I realize there’s probably more than one way he could do this trick. This was simply my best guess, if I had to try and do it myself.

There’s even the possibility to hide them behind a big poster/canvas that’s in between the 2 guys on the platform.
This would of course only work if the camera position and poster are perfectly aligned to create the illusion of an ‘empty’ field behind the platform.

So, when the camera is put on a tripod at about 20 seconds into the video, its position is fixed. And it stays on that fixed point until after the blue canvas is raised (hiding the poster). Yes, it rotates, but that doesn’t change the perspective enough to make the poster visible…

My real bet is a combination of your suggestion and a poster cunnigly placed on top of the platform to conceal the marching band.

Plus, notice in both versions, the guy on the right has the banner draped in front of him, covering his legs/cutting off the view, and the guy on the left does not. So yeah, in the time the magician is off to the side yapping away, the band all run onto the field from the right and line up behind Right Hand Guy, then sprint forward when the tarp goes up.

For those who don’t know about Franz, besides being a magic consultant to many of the largest music acts of the last 30 years (Michael Jackson, Snoop Dogg, Tupac, Reba McEntire, Styx, Missy Elliott) he is also a MASSIVE star all across Asia:

That’s a major priority in marching band, too. Keeping a straight line?

I once had to cross 15 yards, diagonally, carrying quads, in under 10 seconds. The cymbal players had to do it backwards.

Also, check this one out:

My nephew has taken up the band nerd call from my family.

My nephew has taken up the band nerd call from my family.

Fly that freak flag Mr. Nephew! It’s only flag everyone recognizes and every single one is unique.

He was one of those kids who just struggle all through school. He got to HS (which he now goes to a public HS, with a program large enough for a marching band program) and he’s thrived doing this. He was not the football player that his dad was probably hoping for, but he’s a good, nerdy kid for sure.

You can see that from the bottom of the platform to the top ridge of the blue tarp covers about 20 yards of the field, and so my first thought was that the band is lying down on the ground shielded from view… until I saw the above Ken Scott version where the wind has blown half the tarp down.
The big tell is that the camera locks down onto a tripod head when he hits his mark and cam is panned left of the platform: he needs to control the exact position and angle of the cam alright, and he uses the hand held first half of the shot to fool you into thinking all of the shot is hand held (there is a noticeable jerk as the camera person releases from the tripod and stands up). Then notice that the guy on the right is covering his legs with the tarp in both versions of the illusion - that’s the clue to where the band his hiding: they’re all standing in a straight line behind him!