Free-range kids in Japan, UK and US

Just a few links on the different takes on lone children outside home.

So far I don’t have a fixed opinion on this matter but the differences between the countries (cultures?) are striking .

Why Are Little Kids in Japan So Independent? In Japan, small children take the subway and run errands alone, no parent in sight. The reason why has more to do with social trust than self-reliance.

The Great Indoors, or Childhood's End? A British study called One False Move, investigating the mobility of children, found that the average eight-year-old saw its ‘home habitat’ shrink to one-ninth of its size within a single generation. In 1970, 80% of British kids 7 or 8 years of age were allowed to go to school unsupervised; by 1990, this figure had dropped below 10%.

‘Unsubstantiated’ child neglect finding for free-range parents The Maryland parents investigated for letting their young children walk home by themselves from a park were found responsible for “unsubstantiated” child neglect in a decision that has not fully resolved their clash with authorities over questions of parenting and children’s safety.

In the U.S., a lot depends where you are. It seems that suburban areas are the most fraught with worry about the children. In some sense it’s wise, because of the car culture there (which is a true danger to children), but really it seems to be one of the insidious results of post-WWII white flight to the suburbs for a sterile “safe” family life.

Yes, the US is huge and this case an extreme one (I hope).
For me the most interesting link is the second one, when I was 8 (1988) my allowed[0] range was, dunno, 2 km in diameter? - mid-sized town, we lived at the edge of the inner city. After seeing the map (a few years ago) I wanted to ask my parents about their range, but forgot it : )

[0] “allowed” is probably the wrong word, all my friends attended the same primary school and lived in the quarter.

Kaito’s stepmother says she wouldn’t let a 9-year-old ride the subway alone in London or New York—just in Tokyo.

Probably because like most Japanese people, she has never been to those places and relies on the scare stories of local media to form her impression.

When I was a kid near NYC in the 70s it was common for parents to send their children on errands or for kids to travel by subway alone. According to my friends in NYC now, they follow this custom rather than over shelter their kids.

Speaking of over sheltering, by my observation the most common thing a Japanese mother says to her children is the word for “thats dangerous” whenever the kid gets interested in something. Not so sure how “free range” kids here are really…

I grew up out in a heavily forested area of Western Washington. We moved to a little more urban area when I was 11. At the old house, I was not allowed to get near any roads, besides that I was allowed to roam the woods to my hearts content. I pretty much stayed within a day’s walk of the house, so… about a kilometer at that time. The thing is the house is totally out of sight by 15 meters into the woods, it’s very dense. (or rather it was.)

Here’s an approximation of the density followed by a google streetview of what it looks like now: 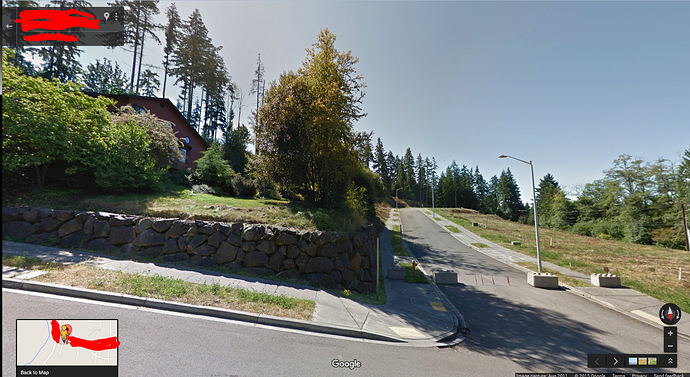 The red house on the left is my old house. Everything to the right of the rockery was a dense coniferous forest lightly interspersed with enchanting vine maples.

This is where I grew up, and it hurts my heart to see the forest cleared every single time I pass by.

In anycase, I have no memory of my mother teaching me anything as a child, but many fond memories of this phantom forest. So I might say I was free range, even though nature was my range rather than a town or a city.

You grew up in a Märchenwald! (lit. fairy tale forest, but mostly the concept of a “enchanted” forest that makes it easy to believe in witches, unicorns and “here be dragons”)

Deep in my heart I’m a city dweller, nature is something to visit for a few hours for recreation and fun, not to live near it

I’m lucky. About a block away from my current house is the edge of a completely wild park. There are two trails running through it, and it is very nearly as good as my home forest.

I go there every Saturday to sit amongst the plants and fungus and dream.

You grew up in a Märchenwald! (lit. fairy tale forest, but mostly the concept of a “enchanted” forest that makes it easy to believe in witches, unicorns and “here be dragons”)

That reminded me of the many fairy-tales that take place in the Black Forest in Germany. I looked it up on image search, and it’s very similar to where I grew up. The species are different, and it’s at a lower latitude than where I grew up, but the trees do look similar to an extent, and the moss is good, and there’s running water like where I grew up. But My biome was technically rainforest, and the Black forest seems almost too cultivated and too manicured in the photos I saw. My forest was more wild and unruly. It was difficult going without a knife or machete. And there were no goddamn Himalayan blackberries there when I was a kid. Down by the road what’s left of the forest today is completely overgrown by Himalayan blackberry, which makes passage impossible without EOD suit levels of exterior clothing.

Seriously, fuck Himalayan blech-berry all the way back to Nepal where it belongs. Sure the fruit is tasty, but it’s not worth the ecological damage.

The Black forest is completely (ab)used for forestry business, as late as 2014 a small part of the area was defined as national park. The only larger primeval forests are in the Bavarian Forest National Park, established some 45 years ago, and some areas at the former German-German border never used for agriculture.

It’s beautiful any way you slice it though. Even if it looks like every single tree was planted in a grid-pattern and there’s no overflowing undergrowth like in a real forest.

I’m going to set photos of New Zealand forests as my backgrounds now. It couldn’t have gone too bad since LotR came out.

I like the Titisee lake for hiking - reachable with the Hell Valley Railway (seriously, look it up!). 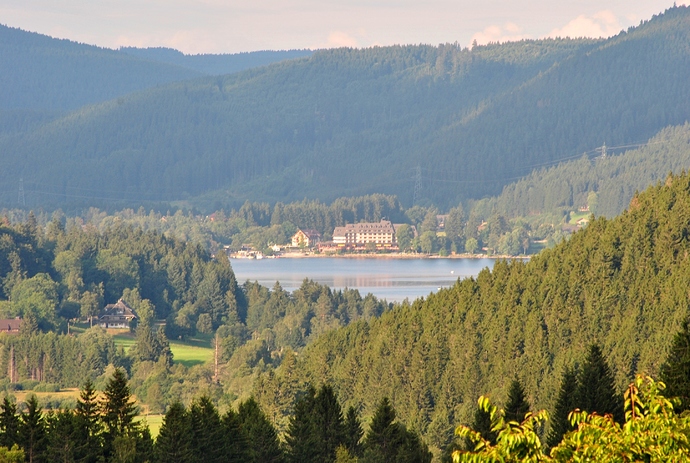 I’ll go ahead and localize myself. Google and the ad networks know where I am anyway, and all it takes is a little know-how and just a small amount of cash to gain that info from them even if you’re a rando…

Apparently there are other people who love this place too:

ETA: I think this guy is speaking Mandarin… But this is the more Eastern trail.

There are two trails in the park. One on the east, with a yellow-painted metal Car Gate at the entrance. The other is slightly uphill to the West, at the corner of the parking lot, it mostly runs parallel to the lower Eastern trail until the retention pond and Goodhope Pond, There is a valley between the two trails and the valley ends where the pond begins. After that is a sort of freshwater delta, and then a narrow fast river that runs to Puget Sound.

Here in Tokyo in most neighborhoods you can no longer say everyone knows everyone else. OTOH by a certain age people do know social custom but thats probably true in a homogenous society or not. In any case, adults will generally help a child who asks but since mothers here tend to teach their kids not to talk to strangers…

my allowed[0] range was, dunno, 2 km in diameter? - mid-sized town, we lived at the edge of the inner city. After seeing the map (a few years ago) I wanted to ask my parents about their range, but forgot it : )

I asked some (extended) family members and everyone had a range of about 1 km radius - Germany, 50s to early 90s, from small villages to bigger cities.
Is my family untypical or the experience of the English one?

This topic was automatically closed after 505 days. New replies are no longer allowed.