Not looking pretty on current Chrome, from http://boingboing.net/page/1 (I don’t see it at all on ‘front page’): 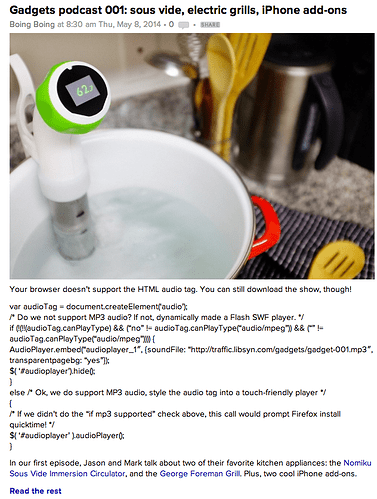 Not looking pretty on current Chrome

We are working on it! Thank you!

For those interested in a Sous Vide immersion cooker, I highly recommend the Anova Version over the Nomiku.

The Nomiku is a bit more versatile with respect to the size of pot it can be used with, due to the fixed fastener on the Anova. However, this is more than made up for by the significantly larger range of immersion depths the Anova will work at. Additionally, the Anova gets up to full temperature faster, has a more secure fastener, and unlike the Nomiku, it can be opened up for cleaning in the event a food bag comes open in the water, allowing you to clean out any congealed gunk inside the device. The Anova also lets you adjust the direction of the water output.

The Anova is a bit bulkier - it has its AC power supply adapter integrated into the unit itself, while the Nomiku has a brick as part of the power cord

Even if the Anova were slightly more expensive than the Nomiku, I wouldn’t hesitate for a second to recommend it over the Nomiku. When you consider that it’s actually a hundred dollars cheaper, the choice is a no-brainer.

So unless the slightly smaller design is extremely important to you, get the Anova

Additionally, the Anova gets up to full temperature faster,

I found starting with pre-heated water (comes out of my tap around 135F hottest) or even heating some on the stove to bring the nomiku up to temp faster really helps.

Yes, I do the same even with the Anova, especially with bigger pots, so heat speed isn’t compelling drawback by itself. Aside from the price difference, the most compelling feature difference to me is the range of permissible immersion depths - when you cook overnight, or for several days (think supremely tender ribs) evaporation is an annoyance

evaporation is an annoyance

I am more concerned, with the cooking I’ve done, with loss of radiant heat from my pot. I use my beer kettle (it has a thermometer and is easy to fill/empty) and wrap it with a towel to keep it from radiating too much heat and making the Nomiku work even harder.

I’d be very, very happy to try other circulators or side-by-side test them. A written review of the Nomiku is coming.

I always use pre-heated water.

Would be very interested in in a written review of the Nomiku.

If you’re super-cheap like me, you’re probably rocking one of these along with a crockpot: 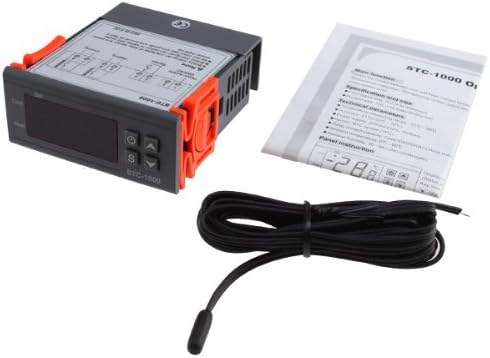 Stuck one of those in a project box with a plug-in. On Saturday, for Mother’s Day, I cooked a pork loin on a kettle grill for an hour, then put it in a heavy-duty 3gal. Ziploc, and immersed it in water to seal it. Stuck it in a crockpot preheated to 60C for the next few hours, and was rewarded with a pork loin that was about the quality of a good ham. Having suffered through more than a few desiccated, sandy pork loins, this was a pleasant surprise.

There’s actually a question I’ve got for all of you sous vide gurus. I’d like one of these external sous vide heaters that has a timer. Not just a timer for how long it runs, but a timer that lets you start it some hours after you set it, so that I can set it up the night before, and have sous vide eggs in the morning. I could easily make something like that, but I’m not into hooking up my kludged-together electronics to wall power when I’m not there to keep an eye on it. It seems like a stunningly obvious feature, which could probably even be implemented with a firmware upgrade, but a couple models I looked at didn’t seem to have it. If any of you guys have a model that does have that feature, please let me know, because that would make a lot more difference to me than any of the other differences I’ve heard about.

Here’s a brief description:
Mellow is a sous-vide machine that takes orders through your smartphone and keeps food cold until it’s the exact time to start cooking.

Because it’s controlled through your phone, and it can keep your food at refrigerator temperatures, Mellow fits into your day seamlessly. No matter what’s going on, you’ll have amazing food ready to go.

Duck confit will cook through day and night until you can take the bones out with two fingers. A salmon fillet will be kept chilled until it’s ready to peak. Everything will be customized to your taste and scheduled automatically.