Thanks for the tip. Only found 6 individuals. (All pictured below for posterity)
Guess I’ll see how many more show up! 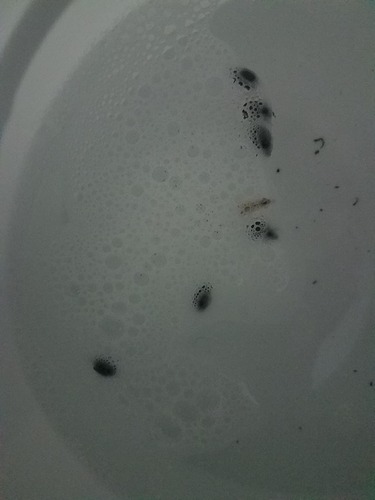 I don’t know for sure. The tree sends runners, and I’ve never seen it bear fruit.

Bit melodramatic and very London-centred as one would expect.

Also so far the writer sounds a bit clueless, I mean:

There is no way to check one’s position on the list.

Well, you could ring the Secretary of the allotment society or the person at the Council who administers the list.

It also doesn’t mention that even with all the Coronavirus, Ukraine war, Brexit, etc. many, if not most sites still have problems finding/keeping tenants.

During the lockdowns, we had hordes of people sign up and everyone’s allotment looked perfect - because going to your allotment was one of the few things we were still allowed to do.

Post lockdown, many of those people have vanished again and the wardens are having to evict them and try to relet.

Turns out, as everyone here knows, growing stuff can be hard work.

And in particular spending days clearing a site, then leaving it for a week or so only to find it overgrown again can be heartbreaking. That often breaks new allotment holders.

Never heard that term. “Houseflies” is what these critters looked like.

Canteloupe are getting big. Panty hose make a decent sling to help bear the weight 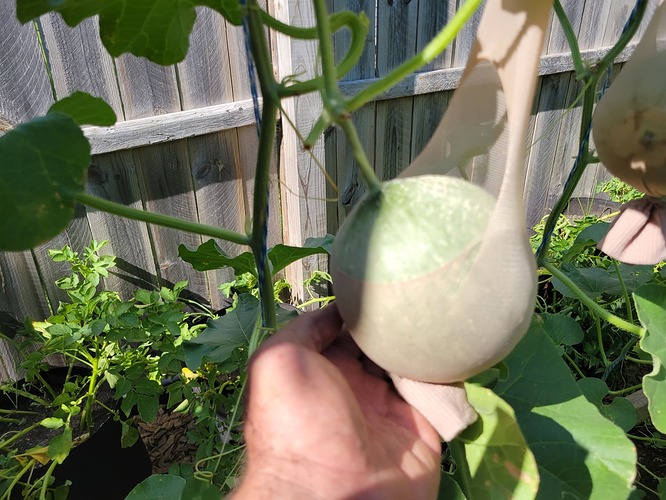 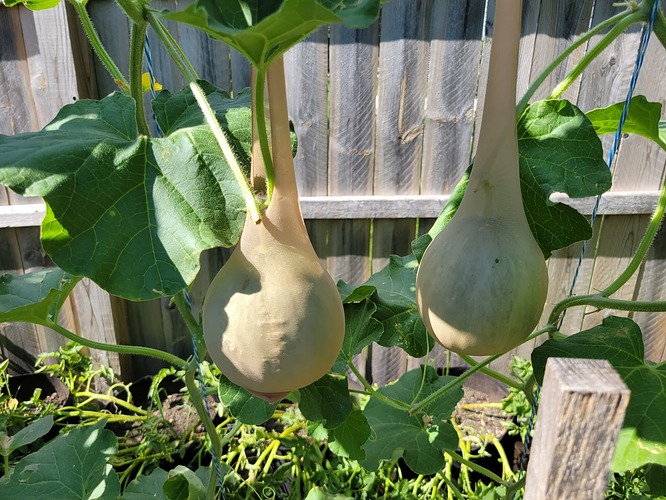 It also makes them look kind of like an alien egg!

Should be hatching soon.

not quite like that.
i do put out cups of beer to drown snails, however. bastards chew holes in my prized peppers! they have to die, obviously. happy to give them their last drink! 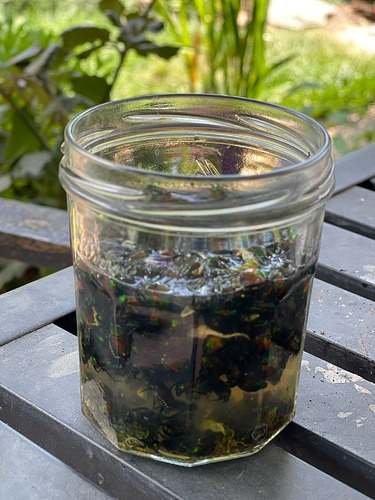 We’re sort of rewilding the backyard to make it a haven for wildlife. This also attracts a lot of Japanese beetles. Chemicals and organic pesticides (pyrethrin) are out for us, both kill way too many beneficial insects. JBs live most of their lives as grubs in the soil, eating the roots of grasses (lawns). They emerge as beetles when its time to mate. This usually only lasts about a month.

Here are the most common organic controls for japanese beetles:

Manual control - I collect them in a jar of water with a drop of dish soap and then dispose of them in the toilet. Don’t let the jar sit around long or it will develop a stench pretty quickly. I suppose you could compost them if you wanted. Fed them to the neighbor’s chickens once. The chickens devoured them up, but vomited them back up shortly after (yum).

Sacrificial plants - Certain plants are like crack cocaine for JBs. Roses are famous for this. Other plants in our yard that attract them are linden trees, hollyhocks, hibiscus, verbascum and persicaria. We have a prairie primrose that seems to attract about 95% of the beetles away from the others. I’ve heard Virginia creeper works well, but I haven’t tried it because I despise that plant.

Biological options - Bacillus thuringiensis (Bt) is a soil bacteria that will help control them. I’ve seen it sold as milky spore. You can apply it broadly to the lawn or spray it directly on plants. It supposedly doesn’t affect bees much, but will kill most anything eating leaves sprayed with it (caterpillars). Live nematodes are often used along with Bt to treat lawns. You lawn will look better, but it won’t stop beetles coming over from untreated lawns.

Lures - JB traps will attract beetles from very far distances. Unless you have the space to put the traps away from the plants to protect, you may make your beetle problem worse. Our yard is big enough that traps in the front yard don’t attract too many more in the back. Even traps quite a distance away from your garden can still be effective in drawing the pest away. Theoretically, you could toss traps (or just the pheremone attractant) in the yards of neighbors you dislike, such a the nutjob down the street still flying trump flags, but I wouldn’t know.

Hope this helps. Hopefully they aren’t around much longer.

Thanks! Sounds like you have a few good suggestions there.
We are on a pretty wild and heavily wooded lot.

Roses - we’ve extricated almost all of the invasive creeping roses on the property, but there are plenty in the surrounding area.

Virginia creeper - have that in spades all around. I haven’t really noticed the beetles going for it, but I’ll keep an eye out. (It and poison ivy have a cozy relationship in some areas that we are currently trying to put to an end…)

Lawn - is a mix of feral grasses, violets, moss, who knows what and various perennials. It only gets mowed like maybe 5 times a year (it’s all heavily shaded)

So i don’t know. This is the first time we’ve tried a vegetable garden at this house, and so far ive only found and removed 6 beetles. Maybe there are enough other appealing things around for them to go after. Guess time will tell. So far the soapy water bucket seems sufficient!

The hops have reached the roofline! 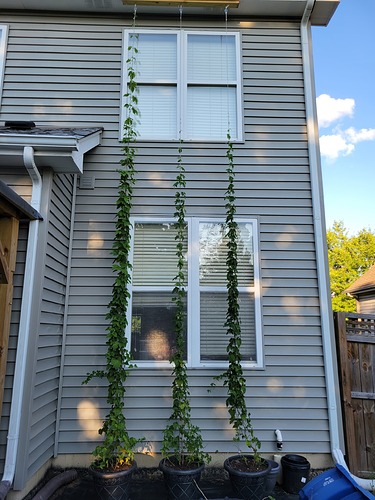 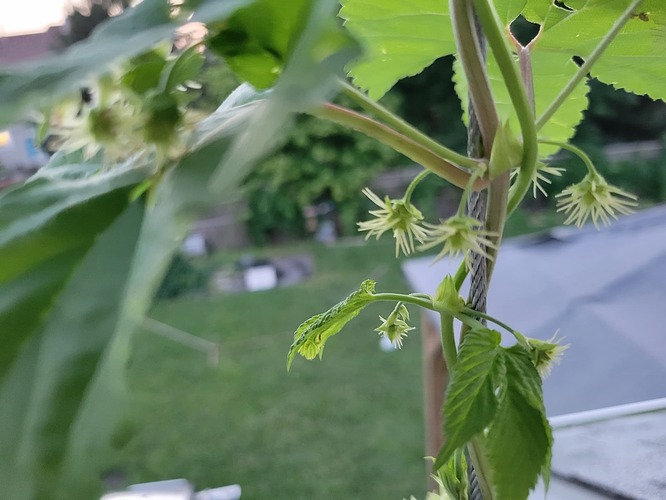 I have only rarely seen fruit on my Mulberry tree.

I occasionally find fruit that hasnt ripened yet (on mine its always on the inside of the hanging branches), but the birds gets to the ripe ones faster than I can.

This is the first time we’ve tried a vegetable garden at this house, and so far ive only found and removed 6 beetles.

Six beetles, I wish I were so lucky. That jar of beetles, in my photo above, is from one morning.

Do you need another Mulberry tree nearby to produce fruit?

Look at them go! Good work!

I have an Illinois Everbearing mulberry, and a deal with the birds. They can have the ones up high, I get the ones down low. And it lives up to it’s name. Since May, it always has ripe, delicious mulberries on it (I know this is unusual for mulberries. They are usually just blandly sweet, but these taste very much “berry.”) You can pick until you just don’t want to pick any more, and come back in a few days and there are more. Of course, this also means there are tons of volunteer mulberry trees everywhere. Luckily, they mow pretty easily.

One thing I just noticed when taking that picture is that the two windows dont line up. How annoying!