Ghosting is now happening at the workplace too

I agree to a point about applications, but that’s changed since the advent of the Internet. Now applicants (especially those for low-status jobs) are expected to slog their way again and again through the same poorly-designed and inflexible and buggy on-line forms generated by vintage-1998 Web 1.0 systems. The least the designers of those systems could have done was put in a (trivial to implement) autoreply e-mail feature for rejected candidates. That they never added one speaks more to a lack of demand for such a basic feature from corporate HR people.

Once the hiring manager is directly involved it’s a different game. If the manager looks at the application or CV and says “nope” that feedback should go back to HR (to – here’s a novel concept! — inform their own decision-making process). At that point HR should take that opportunity to send a rejection message. Lots of “shoulds” there because of course that’s not what happens.

When I was job hunting my number one goal was to find a way to bypass HR completely and get straight to the hiring manager. This required leveraging a lot of privilege along with research and social engineering skills I’d picked up in an earlier career as a journalist. Even so I discovered that HR put up a lot of barriers to my edge-case attack scenario because the primary unspoken mission of HR departments is to justify their own existence.

I agree to a point, certainly an auto-reply rejection for an application would be a good thing. But sometimes you’ve got fifty applicants for every job and you might have half a dozen positions to fill that week. If hiring manager is your only job, that’s doable, but when you’re doing two other jobs at that company, it may not be practical.

When I’ve been job hunting, I’ve sometimes submitted dozens of applications within the span of a week hoping for a couple of bites that can lead to an interview. As I understand it now, some people do interviews over social media, which seems like a terrible idea to me, but maybe I’m just old.

Is this ghosting? I was under the impression that ghosting was more to do with personal relationships.

The base usage of the term is in relationships, which is why title is explicit about extending the usage to the workplace.

If a hiring manager is put in that position then I can confidently state that HR is not doing its ostensible job.

As I understand it now, some people do interviews over social media, which seems like a terrible idea to me, but maybe I’m just old.

I’m also an old but agree it’s an objectively bad idea, one that by its very nature will increase the incidence and impact of ghosting.

They also have been doing for as long as i can remember, and I bet longer then I have been alive. In fact I don’t ever recall getting a rejection letter, or call ever. Not even a single time.

I just wonder about what it means for the term, will I end up ghosting a restaurant if I stop eating there?

Put on your intel-style heat resistant suit, because it’s time for some HOT TAKES.

I’m a fan of you Rusty, but I’m not sure I like the pro-corporate tone of this article.

I have had scores of companies “ghost me” - for example recently I did a phone interview, was told to prepare a presentation on some of my published work, and that details for a fly out would be arranged. I sent several emails afterwards, and a month and half afterwards I was told they “went in another direction”.

That’s an egregious example, but I’ve had tons and tons of companies promise to get back to me and never do.

But if I were to in any way shape or form express indignation, irritation or offense at this behavior I’d probably be at best, blacklisted from that specific company.

Frankly I find it incredibly entitled that employers are complaining about receiving treatment occasionally that is par for the course for the rest of us.

Also as an aside, ghosting is totally acceptable. I’ve been in relationships where I knew any attempt at backing things off would be a debate. You are not entitled to interaction - that’s a weird and vaguely-incely belief IMHO

IMHO, framing interactions with employers through the lens of interactions with intimate partners is a terrible idea. Corporations will fire you at a moment’s notice, but nurture “loyalty” solely to pay you less or get more work.

I keep a mental grudge list in my head of jobs I was supremely qualified for, but was ghosted by the company. Occasionally, I see the company show up on the news when their hiring decision went really, really wrong. Really, REALLY wrong! Schadenfreude, baby, schadenfreude!

People know why they have been ghosted, and often it is for multiple violations of standards of common decency or honesty.

Not sure what you mean. I would think a lot of people do not deliberately set out to violate standards of common decency or honesty – or at least that they do not appreciate the severity of their violations.

There is no excuse for ghosting, whether in dating or the workplace.

It seems the frequent excuse is that any alternative to ghosting is likely to open one up to angry reprisals. (I would say potentially violent reprisals, but I would hope that actually-violent reprisals would be the rare exception.)

On the other hand, I think there’s something absolutely wrong with telling someone who is manifestly unqualified and in dire need of extensive coaching that he or she is “just not what they’re looking for” because “they’ve decided to go in a different direction” – especially if the application process has been at all demanding.

the primary unspoken mission of HR departments is to justify their own existence.

Accepting a job (or interview) and just not turning up is a dick move, and risky. When the market is a bit less employee-leaning and you need another job, they’ll remember you are a dick. Why burn potential future boats for the lack of a simple one or two line email, for courtesy’s sake?

Yeah, the number of times I’ve had companies not even acknowledge I had applied for a job (although more than once the company was a ghost, having shut down but not taken down their job listings), or simply stopped communicating in the middle of the interview process (though in one case they did, four months later, eventually email back and ask if I was still interested in continuing the process…). From the headline, I just assumed this was about some new way businesses had of ghosting applicants/employees. I was trying to imagine what that might be - businesses not letting employees into the building without telling them they’re fired; businesses moving without telling their employees? I’ve heard stories along those lines.

I’ve heard stories along those lines.

Not long ago here even… 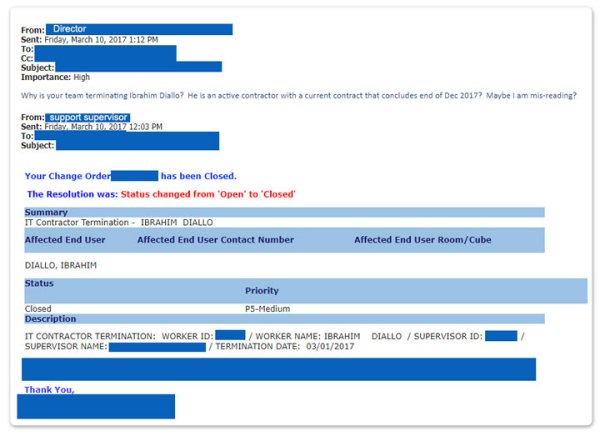 Fired by an algorithm, and no one can figure out why

Fired by an algorithm, and no one can figure out why

A friend of mine has just mentioned this the other day; IMO it’s just a sign of the times - rude, inconsiderate behavior as our so called mores continue to decay.

But calling it ‘ghosting’ is inaccurate from my POV; with romantic relationships that are already established, there’s a certain expectation of mutual respect and consideration, (ie, grow a spine and tell the other person if anything changes) whereas with most business interactions there’s only ever the expectation of ‘perfunctory civility.’ (I don’t know about anybody else, but I’ve been way more screwed over and disrespected by businesses than I ever have by any individual.)

That said, I don’t see much of a personal downside to this happenstance; a job market where other interviewees don’t even bother to show up makes it even easier for me to secure employment.

I literally once got a job with an ad company the exact same day that I interviewed because other people kept flaking. I stayed with that company for six years… until they eventually outsourced the position.

But calling it ‘ghosting’ is inaccurate from my POV; with romantic relationships that are already established, there’s a certain expectation of mutual respect and consideration, (ie, grow a spine and tell the other person if anything changes) whereas with most business interactions there’s only ever the expectation of ‘perfunctory civility.’ (I don’t know about anybody else, but I’ve been way more screwed over and disrespected by businesses than I ever have by any individual.)

A relationship should be built on empathy. Businesses are built on profit. I think a lot of people have lost sight of the former. We’re turning into fucking Ferengi, albeit with more war and slavery, as Quark would be quick to remind us.

Yeah, but beyond that, even - companies doing deliberate layoffs but not actually telling the workers… It’s sort of the opposite of “ghosting” in some respects, but what happens too often in the game industry is studios run out of money but don’t tell the workers. People keep coming into work not knowing that they’re not going to get paid and that their health insurance had already lapsed (with management insisting that previous missed paychecks were just a glitch in payroll). So I can imagine all sorts of scenarios where companies have ways of extracting uncompensated value from employees through some sort of selective disappearance when it comes time to actually pay them.

But, after I got back from Burning Man, he had vanished.

Have you considered that Burning Man is not as attractive to everyone as it is to you?

No offense intended, YMMV, but that’s my mileage. I wouldn’t ghost you, in fact I would appreciate your clarity about keeping the company of hedonists, which ever burner I’ve met, is.

But ghosting is pretty awful, nobody has that coming.

Hmm. Maybe it’s a Canadian thing, but pretty much every call for applications I’ve ever seen contains a variation on the line ‘only qualified applicants will be contacted.’

“People do not disclose to us that they have multiple offers, and more than 60% [of candidates] do,” she says.

Personally I always disclose this, because I want that as negotiating leverage if I’m the successful candidate. But I also don’t see why an employer would expect a candidate to disclose this. First, it’s really the candidate’s business whether they want to disclose that or not. Second, unless this is some upper-tier, exec-level personalized recruitment, the business is undoubtedly interviewing multiple candidates. Why wouldn’t they just assume the candidates are taking multiple interviews? What’s good for the goose is good for the gander.