I hope the media is taking those suggestions to heart… though I feel like some of that, like context, is what the media has been falling down on, it requiring too much time/space and effort.

Wrong. He married someone in 1968. https://en.wikipedia.org/wiki/Narendra_Modi

Every word here is true, but I wish you wouldn’t bury it in hyperbole. I suppose other writers are saying the same things seriously.

Here you go, but I’m not sure hyperbole is out of order in this case (I’m more annoyed by the scattershot grab bag of global ills (which boil down to a rather unremarkable "authoritarians are gonna authoritarian, all the “post-reality” stuff is as old as monarchy) rather than focusing on exactly what is horrible about this):

[quote]
The reality is different. Yes, the rich have indeed gotten poorer. But the poor have been decimated. Call it trickle-down poverty.

About 600 million Indians don’t have bank accounts, many because they are poor and uneducated. Roughly 300 million don’t have official identification. It’s not easy to swap their soon-to-be worthless cash, which is a catastrophe given that they live hand to mouth. It is heartbreaking to see these people lined up in long queues outside post offices and banks, missing days and days of work, pleading for funds from the very bureaucrats from whose clutches Modi had promised to release them.

Modi hatched his scheme in complete secrecy, without consulting his own economic advisers or the Parliament, lest rich hoarders catch wind and ditch their cash holdings for gold and other assets. Hence, he could not order enough new money printed in advance. This is a massive problem given that about 90 percent of India’s economic transactions are in cash. People need to be able to get money from their banks to meet basic needs. But the government has imposed strict limits on how much of their own money people can withdraw from their own accounts.

Patients needing critical care are being turned away because they don’t have new bills, and hospitals won’t accept the old denominations. Old people are being forced to choose between food and medicine. Some farmers, living on the brink of financial catastrophe given their meager savings, have committed suicide as produce sales plummet. Industries dominated by small businesses that rely on private, off-the-grid financing from local money lenders and have no access to India’s meager official credit institutions are getting wiped out.[/quote]

Well I am a fanboy, but still.

it seems like the plan for the future is to fly from mountaintop to mountaintop, high above the rising sea, interbreeding a race of weak-chinned, entitled, murderous idiots who are brought into contact via Harrier jet for scheduled mating visits.

Yup. that’s pretty special. George Orwell said the future was a boot stamping on a face forever. Not Even Wrong. It’s insane people screaming outlandish abuse from liquor shop car parks at the opposite end of town.

I’ve been less than impressed with Mohdi, and even less impressed about the wonderful people he has been turning a blind eye to; but I’m still unclear on how I’m supposed to distinguish this post-truth-manufactured-reality stuff from garden variety lying.

The overlap is especially unclear given that, in the context of nominally democratic government a certain amount of conversion of opinion into fact is a design goal. These ‘elections’ are specifically engineered to turn the electorate’s opinions into very-real-indeed facts about who gets what positions of power. People who actually believe that mere opinion can save a policy from the consequences of colliding with reality are nuts; but the fact that mere opinion can control what policies get to have a chance against reality isn’t some postmodernist nonsense, or even an empirical observation of how governments work, it’s a design goal of ‘representative’ government.

So, how am I to distinguish the people who think that their purity of faith warps the very fabric of reality from the people who merely recognize that getting people to vote for you is the mechanism by which you get access to the instruments of government; and presenting the appearance of popularity is the best way to encourage other people who depend on voters to cooperate with you and to avoid triggering recalls, impeachment, and similar mechanisms?

Sure. But some clever person will do a paper or book on it and show it changed over a period of time. [quote=“ben_ehlers, post:3, topic:90537”]
we may as well just retcon that while we can.
[/quote]

Language meaning changes, but older meanings and why language changes can always be studied and understood.

@jyoti? Does that help?

I dunno, we need something catchy… Axis of Weasels is good but too artisanal, hmmmm
how about we use Fascism?

If the jackboot fits.

From dying megamall parking lots and applebees while rolling coal with Trucknutz.

I dunno, we need something catchy… Axis of Weasels is good but too artisanal, hmmmm
how about we use Fascism?

But yes, Eco’s concept of Ur-Fascism runs right 'round the planet.

MODI isn’t a war criminal. The Gujarat Riots were not his fault. If you want to know what a true war crime is, then read this…

You link to a wikipedia article on the 2002 Gujarat riuots. Paragraph three: ‘In 2012, Modi was cleared of complicity in the violence by a Special Investigation Team (SIT) appointed by the Supreme Court of India. The SIT also rejected claims that the state government had not done enough to prevent the riots.[12]’

Cory is using “war criminal” to describe Modi in much the same sense it is often used on this blog to describe Bush and Rumsfeld, and, less often, Obama and Clinton. That is to say, not “someone who has been convicted of war crimes by an international tribunal,” but, rather, “someone who has used his power as a government official to perpetrate atrocities.”

By this standard, you could definitely apply it to Modi. Regardless of whether he was convicted, his incitement to a general strike, followed by inaction to stop the rioters from massacring muslims in Gujarat, qualifies. 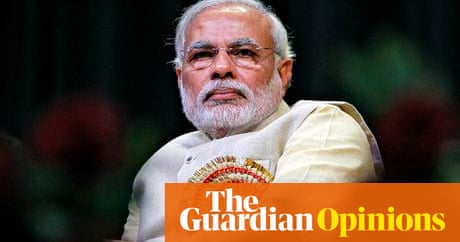 Narendra Modi, a man with a massacre on his hands, is not the reasonable choice...

Aditya Chakrabortty: It looks likely that Modi will be India's next prime minister. But his apologists can't dismiss the facts about his rule as chief minister of Gujarat

Sure does! Thank you. Just wanted to get a proper historian’s take on it.

Okay, I’m using the term unethical fake-news generator to describe him.
It’s atrocious, He needs to get a grip. Or better yet journalistic training and some editorial control. Plus an independent adjudicator to rule on this kind of disgraceful trolling.
If anyone accuses you of something you’re guilty? And the world wonders how you ended up with Fox, Brietbart and Trump?
I know he’s just hyperboling the world, but so much of what Cory writes now is filled with unpleasant personal invective and polemic - he’s the same as the other side.
It must stop.

Should Poland be on this list as well? I don’t know anything about that, but I saw this quote yesterday which makes Poland sound like it’s in the same boat.

Given the current political situation in Poland, and in light of the response you’ve just seen, my advice is to tread very carefully with an ear to the local politics. It’s clear that if you were a senior member of PiS, or a relative, you could just do as you please. When the Minister for the Environment presides over it’s destruction, and the Law and Justice government turns a blind eye to blatant attacks on protesters and starts arresting apposing politicians on pretext, a bicycle park has little hope, especially when they are anti-cycling.

MODI has no signs of corruption. He lives in poverty so that he could see others get rich unlike Trump who can do anything to get and stay rich.

MODI respects women and hasn’t gotten married because he has too much work to do for his own country. MODI works for about 12 hours a day. Trump is a sexual abuser.

MODI started to demonetization the Indian currency to eliminate corruption from India. Trump himself is corrupt.

Propaganda pay well, does it?