You know, I love how people in the bay area, an area of the country beleaguered by over stressed road ways as well as mass transit, continues to give google shit for being a good citizens and paying for their employees own mass transit solutions.

Seriously, would you rather all of google commuted to their offices in their teslas, priuses, and art cars clogging up the 101?

I think not. ( I do not work for google. I have never worked for google. I used to live in the Bay Area, and in Mountain View to boot. )

Dont you know that now anyone who makes more money than anyone else is evil, pure evil. We must hate all sucessful people and companies and then we will all be equal…

Google regardless, taking a boat to work is just cool.

Seriously. Bitching about the fact that Google has tons of money and likes to spend it on their employees is silly.

Stock photograph or not the boats name is “Triumphant”

The blogger doth protest too much, methinks. If what you’re communicating is “But, I want to work at Google,” I know some people there and can probably get you an interview. Call me.

And I also don’t get raging on Google for using a service that presumably hires people, people who probably like working on boats and sometimes wonder if they’ll have to give up doing that for some crap desk job.

I remember someone haranguing a friend for the amount spent on a lavish wedding. Well, is supporting people who cook and bake for a living, or like to sing in a band or like to grow and arrange flowers really that evil?

And make sure to help the authorities spy on citizens…, cheat the citizens out of tax revenue, and donate tons of money to right wing groups. But yeah, people are “just jelly”.

They should just build a Cloud City above SF and send their workers up in pneumatic tubes. It would solve their problems and would very much fulfill the Bond villain with a messiah complex that so many of these Silicon Valley nerds have.

ProTip: Google: How to build an empire

There’s a point you may not be considering: San Francisco is becoming a bedroom community for Silicon Valley on a scale that we’ve never seen before, and the corporate buses are a huge enabler of that. In other words, the armies of South Bay technies might not live in SF if it weren’t for these super convenient ways to take them to their far off workplaces.

And that’s significant for lots of reasons, a biggie being that San Francisco is becoming a land of the rich in a way that I haven’t seen in my 16 years of living here. It makes the dotcom boom seem insignificant. Everyone who remains here (and many don’t) are required to become obsessed with making money just to pay their rent, which means we’re losing a huge part of our culture. And these corporate buses are as good a symbol of that as anything.

All that said, I want to commute to work by boat! This is an absolutely awesome idea. 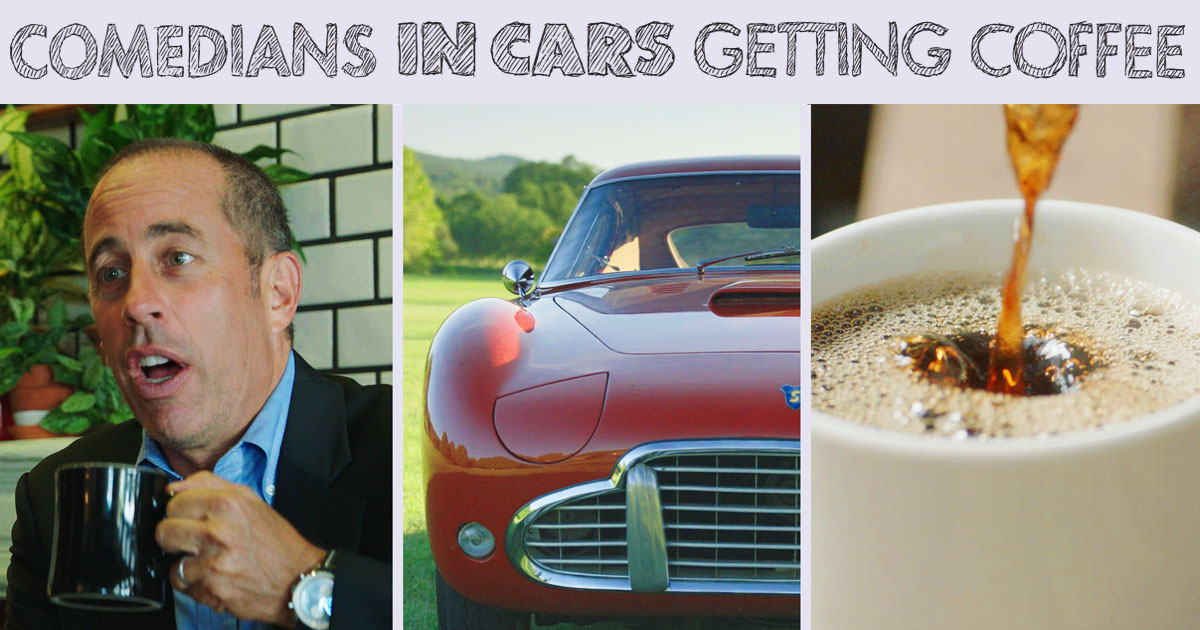 Comedians In Cars Getting Coffee by Jerry Seinfeld

Jerry Seinfeld is joined by friends for a cup of coffee and a drive in a classic car, sharing stories along the way.

Oh, another post à la “look at this weird shit a friend send me, like, the coolest stuff on the internet!”, one image, one link, half a sentence of sectarian and poorly thought out commentary… It’s like having a crappy 9gag on BB. A bit more effort, perhaps?

sf is already a land of the rich… as of today it’s rents are on par with NYC and house purchasing involves having 200k banked and another 250k annual income at the bare minimum.

so you missed the boat on stopping that one.

at the same time though, SF has one of the worst problems in caring for their homeless population ( to say nothing of the mentally ill and hopelessly addicted ) I’ve ever seen, and consequently huge crime. Now people living there will say otherwise, but at the same time they will also give you crap for complaining when your cars window gets busted in because it’s your fault you left a back pack visible there.

the reality is, sf’s problems aren’t coming from better mass transit options. it’s problems are coming from a failure to change in the face of a population boom. and i get that people want to protect the classical architecture of sf. and the skyline. and the environment. but the simple fact is, with demand as it is… that means those houses will be worth millions. so either you get rid of SF’s classical houses and replace them with larger condos and apt buildings, or you move to oakland / southbay. and i don’t know if anyone has seen the development boom going on in southbay… but even with every hinderance the state of california and every lunatic in the bay area can throw at it, it’s unlike anything I’ve ever seen. Mountain View in the two years I was there morphed into a completely different city, and every visit since I’ve left has been that much more startling. Where as SF doesn’t change. between the classic architecture, and the city blight ( because they’d rather have a gaping hole in downtown for 20 years than approve a build plan that might offend someone ), what you have is one of the clearest contrasts between rich and poor in the entirety of he United States.

So basically… Google provided or SF / CA provided mass transit options aren’t making SF less affordable. SF being unable to develop new housing options is. And no matter what happens the population of SF HAS changed. SF isn’t what it was 16 years ago and never will be again. Same as how Mountain View is no longer farm land.

Accept that the SF you knew and loved 16 years ago is as dead as the Brooklyn I grew up in 16 years ago. We’ve both got to live with that. And if that means moving… so be it. Such is life. Things change. You gotta adapt. And that’s something the bay area refuses to accept and that’s the primary source of most peoples problems whether they want to accept it or not.