Google will now delete your account activity on a rolling basis

How can we tell?

I expect this was a business decision that is being spun as a respect for privacy, as storing data costs money. I for example have been using GMail since it was first offered and was invite-only, so they most likely have several gigabytes of log entries on me, about 15 years in GMail alone, and most of those log entries are stale. But the simple fact that they have them somewhere puts them on the hook for having it subpoena’ed, takes up space, things like that.

By explicitly setting a limit, they can dump old database entries and reduce the amount of data they have on permanent archive. The ethical part is just icing on the cake, really.

Which would be okay as long as the cake is real. For once.

More like “hey, we can save a lot of money and as a nice side effect, give people with privacy concerns what they want! You know what, let’s just not mention the saving money part at all!”

Holy shit I thought this was a thing like…a decade ago!!!

So, since I dropped the ball on paying attention…what DIrD happen to the governments assertion that if the data is more than 90 days old they didn’t need a warrant to demand that data from third parties?

We are talking about a company that redesigned its logo based upon the number of bytes involved. Google is exactly the sort of company that would consider this.

We are talking about a company that redesigned its logo based upon the number of bytes involved.

That’s about load time rather than storage (and a sensible refinement).

More generally, this is web activity, isn’t it; data about Google users rather than data users have stored in Google services?
So Google Search might delete my search history or Google Maps delete the record of where I’ve been, but Gmail wouldn’t delete the record of who I’ve contacted (i.e. empty my inbox and outbox)?

More generally, this is web activity, isn’t it; data about Google users rather than data users have stored in Google services?

Correct. What I wanted to hint at was how long Google has been storing info. A lot of it will be stuff like 2009-05-05 13:45:23UTC user logged in and so on. When I downloaded all of my Google+ data, I was amazed at how many such activity log entries had been preserved by Google, even though I was well aware that I had not opted out of any tracking. Not shocked or annoyed, just fascinated in a professional way.

I expect this was a business decision that is being spun as a respect for privacy, as storing data costs money.

It’s also a response to the backlash against the abuse of users’ private data by platforms like Facebook and Twitter and concerns about a user’s entire history being shared with government entities. None of the big platforms want to be regulated or broken up because of this.

Google is trying to get ahead of the perception problem, and unlike the feckless Twitter or the blindly data-greedy Facebook it can do so with minimal impact on its business model. Three months of behaviour is enough for Google to establish a baseline profile on a user in their ecosystem (and for existing users they have a lot more data than that), and an analytics-based tweak every three months to the baseline is enough for Google to keep up-to-date on changes in the user’s behaviour, interests, and priorities. 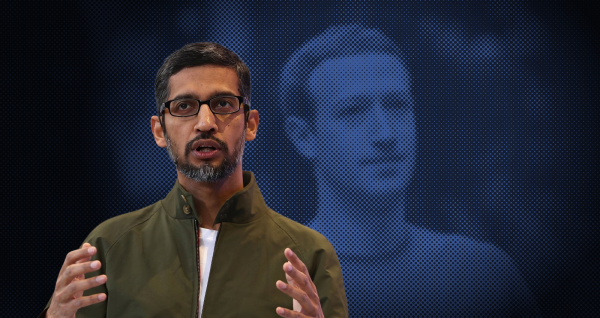 Mark Zuckerberg: “The future is private”. Sundar Pichai: ~The present is private~. While both CEO’s made protecting user data a central theme of their conference keynotes this month, Facebook’s product updates were mostly vague vaporware while...

But if you delete your old schedule, how will your remember all the times you lifted weights with Squi and Timmy and Tobin and Mark?

it doesn’t seem to be things like schedules- just your web browsing history.

About all those times you googled “how to get approved to sit on the Supreme Court”.

The benefits of personalization seem to be very little for me at least, as I turned off activity about a year ago.

Or looked up one crazy lobster-man once because I didn’t know who he was and ended up seeing articles about him for months on my news feeds.

There you go. Totally deleted!

Then you see a prompt that says “restore”.

Restore from where? Didn’t I just delete it?

Absolutely. I cannot understand why anyone would want their history stored at all? I don’t need to see places where I went on maps. I don’t need personalized ads since I block the crap out of them anyway (only ever private browsing mode, with badger, canvasblock, ABP and all the usual plugins). I sure as hell don’t need a youtube history since I use it maybe 2-3 times a year. Calendar events from the previous year are set to auto-delete every April (tax day).

It just amazes me how little most people care about this and are happy to, e.g., allow location services for all their apps on their phone.

Its more likely that the information is just not tied to your account anymore but is still on google’s servers. If the information is somewhere, its better that you have access to it in any legal matters. Information can condemn you or set you free depending on how it is interpreted. So having it yourself for a lawyer to interpret, might be a good thing to have on your side one day.

I always think about the first Serial season how if the same events happened in today’s world, there would be so much digital evidence that it would likely be easier to prove Adnan’s innocence or condemnation.