Because prisons are notorious for the wide range of options they offer their inhabitants.

I wonder when Ben Carson chose to be straight.

Again: why is the opposition party fucking around with this and not holding the president’s feet to the fire about things like surveillance and economic inequality and OH GOD WE ARE FUCKED.

When he first realized in late middle school/early high school that he was attracted to men, and it would be a lifelong battle to choose another path?

I mean, the only interpretation for people who argue this is that they must be attracted to men and choosing to disavow that urge. If they were all at least bisexual, maybe their confusion could be considered genuine?

(More likely, they are simply not being genuine)

So being raped in prison is a choice?

Too bad this doesn’t lead the right to conclude we shouldn’t be putting people in prison.

Ben Carson, a neurosurgeon, who is likely going to run for president as a Republican, says “a lot of people who go into prison, go into prison straight and when the come out they’re gay.”

Talk about burying the lede.

No kidding. Is there any evidence that people go into prison straight and reenter society gay? I imagine there may be a handful of cases like that, where people had suppressed same-sex attractions before prison, and grew to accept it while in prison.

But I’d be willing to wager that the vast majority of people who go into prison identifying as straight remain straight when they leave prison, regardless of how they got their rocks off in the slammer.

Meanwhile, why are we even talking about this guy? It’s not like he has a shot in hell at the Republican nomination.

I can’t stand anyone who brings up Leviticus in the first place. As I understand it, it was supposed to be laws for one group of people at one time, and not apply to day.

If it did apply today we would have a whole industry around people raising doves to sacrifice every time a woman ends her period.

Oh, come on. He does have a point. For example; Michael Jackson was born a poor black boy, and died a wealthy white woman. Which proves that race and gender are choices too.

Well, supposedly he dictated it (and also the only Biblically sanctioned grounds for abortion), but in fairness, he was kind of pissed off at the time.

I can’t stand anyone who brings up Leviticus in the first place. As I understand it, it was supposed to be laws for one group of people at one time, and not apply to day.

So killing people for their sexuality is OK in certain contexts? Interesting.

In my experience approximately 100% of people who cite the Book of Leviticus to condemn homosexuality either have no fucking clue what else it contains or actively ignore it. 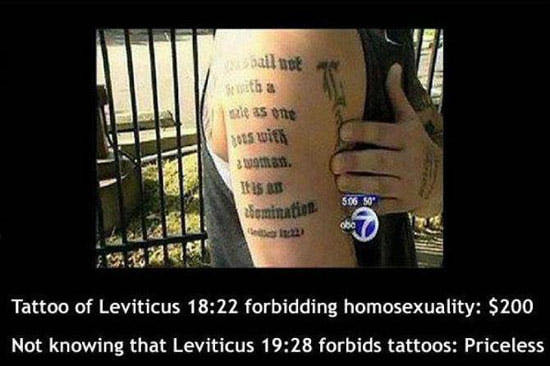 This isn’t even the stupidest, most thoughtless thing Carson has uttered.

He has opined widely and every time he does, he demonstrates he knows about nothing but neurosurgery.

The fact that he continues to have any credibility at all speaks to how deranged the Republican party currently is.

He has opined widely and every time he does, he demonstrates he knows about nothing but neurosurgery.

I don’t know about anybody else but I’m not sure I’d trust a guy like that to poke around in my brain either.

In my experience approximately 100% of people who cite the Book of Leviticus to condemn homosexuality either have no fucking clue what else it contains or actively ignore it.

Of course they ignore all the “difficult” parts of Leviticus. You think they can stop eating pork? For goodness sakes, cursing your father or mother, adultery and blasphemy are punishable by death in Leviticus.

Also we keep talking about homosexuality, but it should be noted that there is no ban on lesbians in the bible.

So . . . does this mean Ben Carson is in favor of prison reform, in order to stem the tide of “new gays” re-entering society?

So killing people for their sexuality is OK in certain contexts? Interesting.

Uh wow - I never said that.

To expand on my statement, even if you used Leviticus to say it was a sin, Leviticus isn’t relevant to modern Christians as they don’t follow anything else in that book.

I remember the red headed lady from Sex in the City (I’m so great with names lol) got into trouble for claiming her long-time lesbian relationship was a choice, but she clarified later and I think it was a great clarification. She considers herself bisexual but made a conscious choice to be in a lesbian relationship. It was probably a mix of happenstance (meeting the right woman at the right time) and choice (deciding to pursue that woman rather than any other woman or man). And isn’t that what straight people do? You can choose to be with someone or choose not to be. Straight people do it ALL the time when they go into relationships or leave relationships. For some of us, that choice is just broader and includes more than one gender.

And I’ve made decisions NOT to be with someone I really cared about because I knew the relationship was not healthy, or whatever other reason. Just because you care about someone or are attracted to them doesn’t mean you make the choice to be with them romantically or sexually. Straight people do that shit all the time. LGB folks aren’t any different.

In summation, this “choice” narrative is way too narrow and not very accurate, as well as othering.