Oop. Bang goes my ideas of underwater self-defence. I’d pretty much figured on a cracking right hook, but that little fish was very agile.

Yes, scary agile. They clearly don’t have to be big to do a lot of damage. Eeep!!

Sharks are like nature’s illustration of the (quite probably apocryphal; but so fitting that he might as well have said it) “If you kill one, it is a tragedy. If you kill ten million it is a statistic.” line…

Sharks: ~75 attacks/year, many nonfatal, reputation for being stone-cold scary motherfuckers of the deep.

Yep. I don’t think killing all those sharks is groovy. Bad news.

I like how he still tries to put the speared fish in the container even after the first hit.

I think the shark might have been hoping to steal his kill (it circles the container after leaving him). Of course, fat lot of good that would have done him with a lionfish.

Some good thinking - a lionfish is venomous, pretty seriously. As you cavort around trying to nail the shark, you could well get a dose from the fish.

Kudos for keeping their head and checking their dive watch for ascent.

I wonder why this diver is skewering lion fish. Are they tasty?

Actually they are supposedly very tasty. They are also non-native to the area and incredibly invasive with no natural predators. 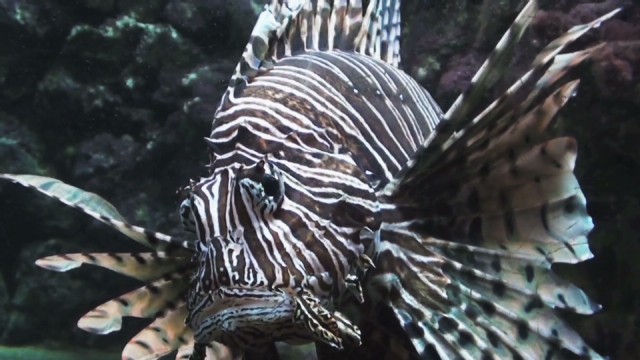 The Atlantic Ocean is picturesque and the fish are vividly amazing. But a serious problem lurks: the lionfish. Katie Linendoll reports special for CNN.

That may change the story, into “Garbage man nearly bitten by stray dog.”

How common is it for a shark that small to attack an adult human? That seems really unusual.

Depends on the shark type…and what he’s trying to accomplish. But in fact, the most aggressive (to people) sharks are the bull sharks, who rarely get much bigger than that.

I was wondering where the self-congratulatory line “…and continue to protect the reef for future generations.” came from, especially when I saw him swimming around with a trident, but then I saw what you was going after. Important work.

Encounters with Caribbean reef sharks have become more common as they associate divers with a free handout. Not sure about the Caymans but shark feeding encounters are big draws elsewhere in the region and some sharks do travel far. Note the small size of the pole spear. Until recently, spearfishing was illegal in the Cayman Islands but they now allow modified pole spears solely for culling invasive lionfish (this diver was doing a good deed). Short spears are less effective for spearing larger, faster prey, not to mention fending pesky reef sharks.

I guess, I’m finding it difficult to gauge the size of that shark (I thought it looked like it was about 4ft long). But then, if I’m going swimming with sharks (which I have, little 3-4 foot reef sharks in Thailand) I’m generally not carrying around a bag of dead lionfish, either.

First off, Lion fish are devasting reef fish populations, and this guy is absolutely doing excellent conservation work by offing as many as he can. I’ve heard of attempts to get local shark populations turned onto the taste of lion fishes by spearing them and then feeding them to certain species of reef shark, which apparently can digest them without incident. (This may lead to future encounters with spear fishermen, but also fewer invasive Lion fishes…)

Second, as others stated, Lion fish are delicious.

Finally, if a shark is trying to steal some tasty, bloody fish from you, I’d generally recommend hunkering down, as opposed to free swimming to the surface.

Next time I go tasty, bloody fish catching in a shark zone, I’m takin’ a six pack of grenades.