Oh God I hate this part, this is where the thug with no nationality springs from the shadows and throttles him. Then, in his own blood, he writes the enigmatic letter C.

I’ve been somewhat surprised lately that I’ve been seeing more criticism of Greenwald from the radical left: claims that he’s stringing out the process of publishing Snowden’s documents for the sake of his own publicity; complaints that he makes too many concessions to the legitimacy of the state security apparatus. My first gut response is that such criticisms are wildly ultra-left, since Greenwald is putting himself at considerable risk by confronting powerful institutions for the sake of democratic principles. However, I have often found myself frustrated and puzzled by some journalists and social critics, who produce devastating critiques of mind-blowing systematic injustice that you would expect to bring into question the legitimacy of the fundamental structures , and yet when it gets to the question of what to do about it, seem to start mumbling about writing letters to your member of Congress and maybe signing a petition.

So, this story seems like it might be a clue to what Greenwald’s strategy really is, as he seems to be switching from one patron, The Guardian, to another, Pierre Omidyar.

However, I don’t recall ever having heard of Pierre Omidyar before, and the Wikipedia biography of Omidyar doesn’t tell me much. He’s fabulously rich, he made his money from eBay, he’s French-Iranian, and he’s a philanthropist … but I have no idea what this guy believes in.

They’re both libertarians, I think that fuels some of the anti-Greenwald sentiment as well.

I’m waiting for the Greenwald comments hit squad to show up. All of the “from the left” and “he’s not really a liberal” drivel is obvious FUD by funded trolls.

If you read radical sources, why are you surprised when their comments are radical? I consider myself pretty firmly on the left, but I haven’t even encountered your sources. Radicals are much harder to find on the left than they are on the right - at least, in the US.

Greenwald seems to be stoking the boiler a bit as well, letting people know that not only is there more but “the worst is yet to come”. http://world.time.com/2013/10/14/greenwald-on-snowden-leaks-the-worst-is-yet-to-come/

Would help if you could cite criticism that you consider to be coming from the radical or ultraleft.

See how much of these comments you can stomach: 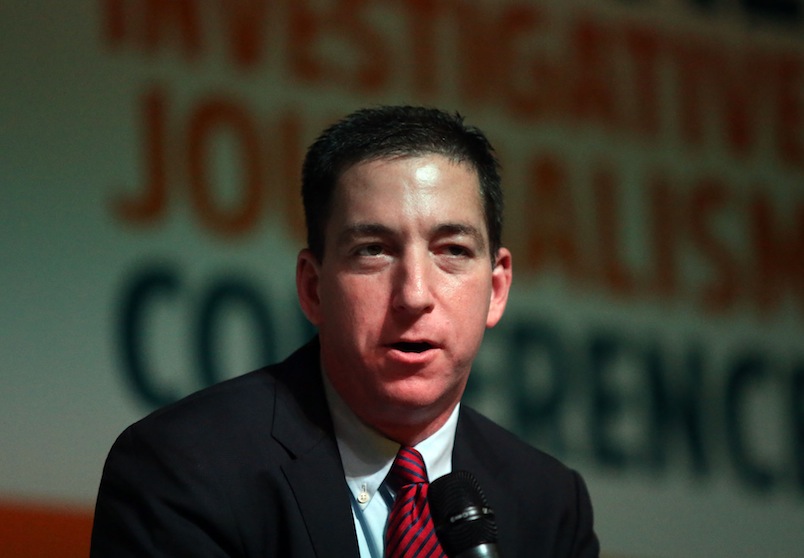 Glenn Greenwald, the reporter who first published Edward Snowden’s NSA documents, will be leaving the Guardian to start his own...

Yes, it boggles me that anyone concerns themselves about “left/right/libertarian/pastafarian” BS on an issue as fundamental as this.

I don’t think they’re concerned (there might be a few “O-bots” on TPM: I’ve already weighed in on the crummy quality of TPM’s standard commentors) with political labels, I’m convinced most of them are paid trolls from the US government and elsewhere. Greenwald has made a lot of enemies, enemies who are terrified that people will read and listen to him.

Well, for instance, A Heat Vampire in Search of a Movie Deal, which was tweeted with approval by Asher Wolf. Shortly after reading that, I was reading some comments section on a news story in which several people made similar points in brief. I haven’t been able to find those comments to cite an example, so maybe it was just a coincidence and I’m reading too much into it. That is, I’m used to seeing right wing criticism of Greenwald, and I was surprised that I thought I was suddenly seeing a trend towards more left wing criticism of Greenwald, but that may have been wrong about that.

The definition of “ultra-left” I’m using refers to a strategic judgment – in this case, is this the right time to emphasize criticism of Greenwald, or is it more important to emphasize supporting Greenwald, and just criticize Greenwald parenthetically?

I’m leaning towards the latter, especially after plowing through the Guardian’s comments section and finding almost all the criticism of Greenwald coming from the right, along the usual lines of, “There’s no dangerous state surveillance apparatus, and besides, I support it.”

Um, that’s going to be news to Glenn Greenwald. Here he is speaking for himself:

Four. Wow, that was hard. So much “I’m just saying”, relativistic noise.

I particularly like how they try to paint it as though he was fired. When there is a statement from the Guardian about how they’re sorry to see him go. And, you know, basic, kindergarten-level logic might tell you how having a guy leave your paper after breaking some of the biggest stories ever for you… Then again, logic is quite obviously what those comments try to painstakingly avoid.

The idea that the Obama-bots over at Talking Points Memo represent any kind of “radical or ultraleft” is laughable on the face. Partisan hacks act like partisan hacks. The fact that these NSA revelations embarrassed a Democratic president means that Democratic partisan hacks will attack them and their sources. As someone who considers himself a member of the actual radical left, I only welcome and applaud Greenwald’s work in this (and many other) areas.

I don’t know what valid criticisms there are of Greenwald regarding the NSA revelations that could possibly come from the radical left. The “dribs and drabs” criticism doesn’t hold water. Greenwald is digging through mountains of documents and has been publishing numerous articles about them in outlets around the world, chosen where they can have the most impact and has promised to continue to do so in as speedy a manner as he is able. Nothing indicates to me that he is not living up to that promise. Journalism takes time and effort.

I will have to reread the article, but I was under the impression that the Guardian might have also impacted how quickly some of the stories were emerging, no? Maybe out of an abundance of caution, or fear?

I wanted to add that I’m not making a judgment about Greenwald, if he is looking to make more money. He is taking substantial risk in this endeavor. I don’t begrudge him some reward. I just don’t know anything about his partner.

Some people may have forgotten that Greenwald wasn’t drawing a salary from The Guardian, and relied on voluntary contributions from fans. It’s possible that this plan wasn’t working as well as he was hoping.