Whenever someone invokes the name of a famous past whistleblower in order to criticize Snowden, its a good idea to check what that whistleblower actually thinks: 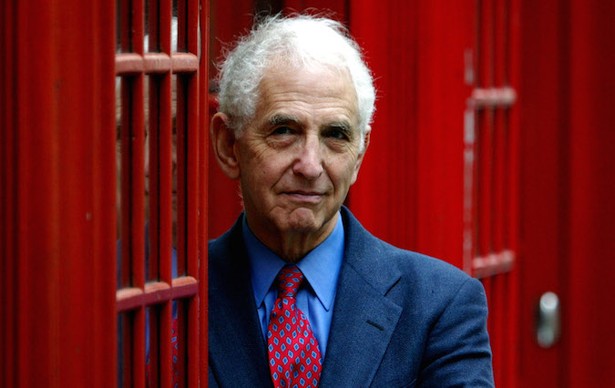 Daniel Ellsberg: Snowden Kept His Oath Better Than Anyone in the NSA

That sort of civic courage should inspire other Americans to follow suit, he said.

Whenever someone invokes the name of a famous past whistleblower in order to criticize Snowden, its a good idea to check what that whistleblower actually thinks

What exactly has been Gladwell’s contribution to knowledge and society? I am uninstructed in the subject.

Having performed an extensive reading of Malcolm Gladwell’s works, it seems to me that he is simply a fabricator of his own realities. His books tell tales all meticulously chosen to illustrate some basic point he wants to make, regardless of whether that point has any independent merit or even usefulness. Remove the supportive anecdotes and there appears little of substance left.

Or is that what all such authors do? I suppose they have to make money somehow. Just wish they didn’t waste our time so much.

Malcolm Gladwell has an article in this month’s New Yorker

The New Yorker is weekly!

The establishment’s campaign to discourage Obama from giving Snowden an end-of-term pardon is foolish in two ways: first, there was very little chance of the pardon they fear; second, because for the next four years the surveillance apparatus that Snowden exposed with be in the (tiny) hands of an administration that will be very much inclined to turn it on them.

If you read his wikipedia page, you’d know what he has done; but you’d still be unsure about his contribution to knowledge and society, because it’s deeply non-obvious.

Even if one were inclined to be more charitable than I; there isn’t anything in his publication history that suggests the slightest knowledge of what he is attempting to talk about here(which, if one were feeling charitable, might explain why he gets basic matters of historical fact utterly wrong).

Having performed a cursory reading of Malcolm Gladwell’s works, I would agree: he creates these simulacra, then falls in love with them and proclaims them as universals.

Yes - much better put. Where I come from, some would even say Gladwell is “Up his own arse”. But I myself would hesitate with such a judgement.

I think there would be a very useful test to see whether or not your hesitation is a good idea:

Place Mr. Gladwell at a cocktail party. Plant a subject-matter-expert on whatever has caught his attention recently at the same party, unbeknownst to him. Preferably a female one.

Looking at his publication history, he strikes me as a guy who can spin fairly thin knowledge of something into a great story. Let him do so for the pleasantly inebriated onlookers.

When he finally collides with the subject matter expert; observe. If he is smart, and humble, enough to STFU and listen; he at least isn’t irredeemable. If he puffs up and begins mansplaining; prep him for ontological reassignment.

Where I come from, some would even say Gladwell is “Up his own arse”. But I myself would hesitate with such a judgement.

I am relieved to see that others share my (darkly stated) opinion of Gladwell. But I do think that a judgement of his being up his own arse is perhaps a little lacking in cultural relativism, and so share your concern about making it.
Now, saying he’s in love with his own intellect might be a different matter.

Gladwell is famous for his statement that it takes 10,000 hours of practice to become expert at something. While this number has proven both arbitrary and high, he has attracted a fan base of expert bullshitters.

Gladwell has been a long-term apologist for the right – Big Tobacco, Big Pharma, etc:

It is Gladwell. What does anyone expect. He was right wing in college and beyond.

Malcolm Gladwell Unmasked: A Look Into the Life & Work of America’s Most...

Yves here. Yasha Levine and Mark Ames have launched the S.H.A.M.E. Project, which stands for "Shame the Hacks who Abuse Media Ethics." Its approach is to provide information about the background and funding sources of well-recognized journalists and...

It’s not a campaign for Obama. He is a complete adherent to the surveillance state. The campaign is for the sort of people who read the New Yorker and can be swayed by a man pretending, expertly, that he’s an expert at something he isn’t an expert in. With a little luck, the establishment thinks, the people who think that the NSA broke law in so monstrous a fashion it needs to be burned down and rebuilt from the ground-up, will be reduced to cranks because, after all, all the Serious People™ reading the New Yorker will be in agreement that he isn’t one of those good leakers that, presumably, leak things the establishment doesn’t mind being leaked.

Presumably, a few years of close scrutiny by the imminent Trumpenreich ought to change a few minds.

Dirty secrets compromising the look of your government?
Too much hard work scrubbing them off?
You need:

Malcolm Gladwell comes out the Rightwing Nutjob training grounds:
"During college, Gladwell received journalism training at the National Journalism Center, an outfit that worked with the tobacco industry ‘to train budding journalists . . . to get across our side of the story,’ according to an internal Philip Morris document.

"After college, Gladwell worked at the right-wing American Spectator, the Moonie-owned Insight and a neocon-Christian fundamentalist thinktank called the Ethics and Public Policy Center, which was ‘established by neoconservatives to promote an increased role of religion in public policy and turn back the influence of secularism.’”

He’s a light-weight popularizer of half-baked theories with a good voice and spectacular hair. Don’t take anything he writes seriously. He doesn’t.

(Why, no, German wasn’t my best subject at school. However did you guess? /s With luck someone who actually speaks German will be able to figure out what I meant.)

I believe the term for what you describe is “just-so stories.”