Guga's favorite cast iron pan rusted out by his nephew

At first I’m like, why so much fuss over a $40 cast iron pan? But then I remember he’s a Youtuber and this video has almost 1.5 million views, so I guess it was worth it.

why so much fuss over a $40 cast iron pan

Apparently you have never had a favorite cast iron pan?

Apparently you have never had a favorite cast iron pan?

Not an unpolished sand cast cheapo like that one. I was lucky enough to be gifted a couple of old Wagners and have two more that are so thickly crusted I can’t see the maker’s mark, but they are all smooth as glass on the cooking surface. I also have a modern Lodge griddle that is a pain in the ass to cook anything sticky on. The difference between cooking eggs on the two types is remarkable.

On that note, does anyone know of a company that actually polishes their pans? I know there’s that couple from Brooklyn, but I can’t afford boutique kitchenware.

ETA: I guess the advantage of sand casting without polishing is that if you rust it out like this it doesn’t totally destroy the surface.

At first I’m like, why so much fuss over a $40 cast iron pan? But then I remember he’s a Youtuber and this video has almost 1.5 million views, so I guess it was worth it.

That is kind of an unnecessarily cynical take. I’d be annoyed too if someone messed up my pan and I had to replace it or spend a few hours cleaning it up. Is it the end of the world? No, of course not, but it is an annoying thing that happens. I’m not sure the world needs another youtube video on reconditioning a cast iron pan but a lot of people enjoy it and in particular enjoy Guga.

And yes, he is a professional youtube video producer and gets paid for that, not sure why that is a problem. $5K / M views is A) Pretty much the top end of what I have heard from most youtubers – most earn less, often considerably less depending B) not necessarily that much. Producing videos is a lot of work. Big channels like this are not generally produced by a one person with a webcam in their basement. They have to pay camera operators, video editors, equipment and promotion costs. Imagine a TV show made with a few thousand dollar an episode budget.

From what I understand a lot of big youtube channels basically break want to break even on the youtube ad revenue and actually make money other ways: sponsors, merchandise, patreon, or other revenue sources.

On that note, does anyone know of a company that actually polishes their pans? I know there’s that couple from Brooklyn, but I can’t afford boutique kitchenware.

I looked into this. There were a few options but they were all more expensive than I was willing to pay. I ended up getting a lodge and did it myself with a random orbit sander and some 60 grit sandpaper on a lodge. It only took ~10 minutes with the sander and of course reseasoning from scratch. I did have some issues getting the seasoning to stick to the newly polished iron, but eventually it stuck.

Ah! I didn’t watch the video, didn’t know it was a bumpy contemporary model.

I have my grandfather’s cast iron, and it too is slick as glass. As a metalworker, I took all my modern, rough cast stuff to the shop and polished the surfaces, and sure enough after seasoning even the new stuff was much easier to cook with. I wonder if there’s a business model in there . . .

I’ve wondered about doing this with my griddle (like, every time I cook on it), but assumed it would take forever. You’ve got my attention.

I wonder if there’s a business model in there . . .

Yeah, that’s what kind of annoys me about it. It seems like a company like Lodge could release a range of “chef quality” cast iron with little to no effort. I would gladly pay a little extra. A little extra, mind you.

Yeah, that’s what kind of annoys me about it. It seems like a company like Lodge could release a range of “chef quality” cast iron with little to no effort. I would gladly pay a little extra. A little extra, mind you.

My understanding of the issue is that the mass production seasoning of cast iron is difficult to do with polished surfaces. So it isn’t only the grinding itself that adds cost, but the pre-seasoning would take longer and be more expensive. Alternately they could sell them unseasoned like our grandparents bought, but I guess they would probably still need some coating or they would rust during storage and transport.

In terms of semi-premium cast iron, lodge has their “blacklock” line which is thinner and lighter than their standard stuff – it is supposed to be on par with high quality antiques. It’s a fair bit more expensive and still comes with the sand cast texture. 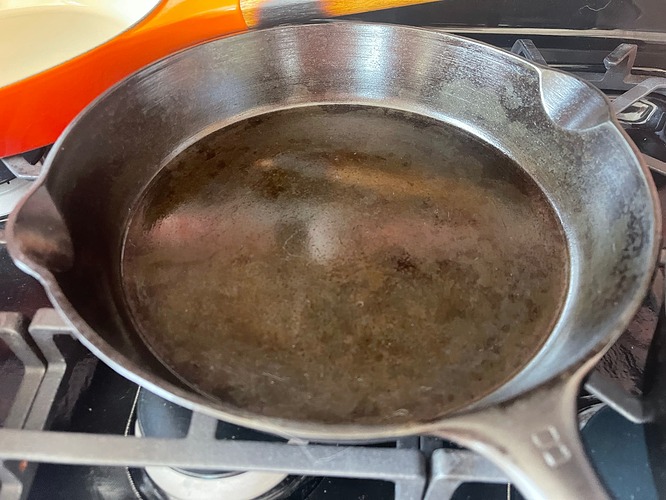 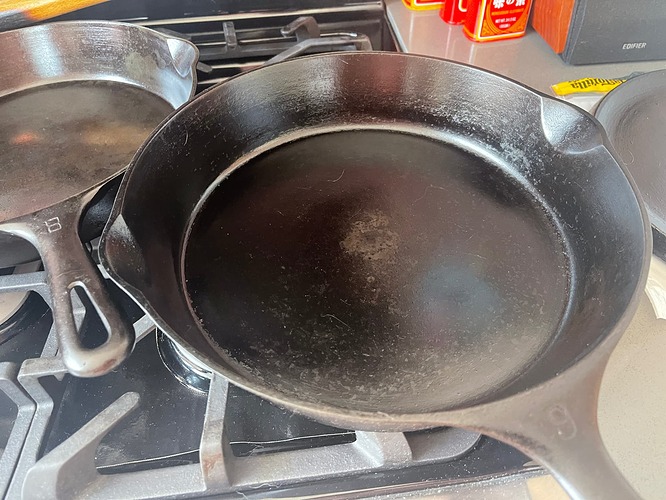 My daily use duo

the damage done by his nephew is minor

Probably because it’s fake. Increasingly these “restoration” videos involve tarting up the “before” item to make it look worse than it is. Dunking it in bleach, for example, with create a lot of flash rust that looks really dramatically bad on the car/heirloom/frying pan but is trivially removed with any mild acid or rust converters like Evaporust.

Always be suspicious when the before item has very thin even orange rust on it, and no deep scaling, pitting, or dark brown/red rust.

I’m not saying this video is fake, but more and more restoration videos are. It’s too much of a cash cow not to be abused.

Yeah, I was thinking about this again because I’m cooking and realized that the pan that he’s fawning over preserving the “details” of (ie the logo) is the same brand as the burner he uses to season it. 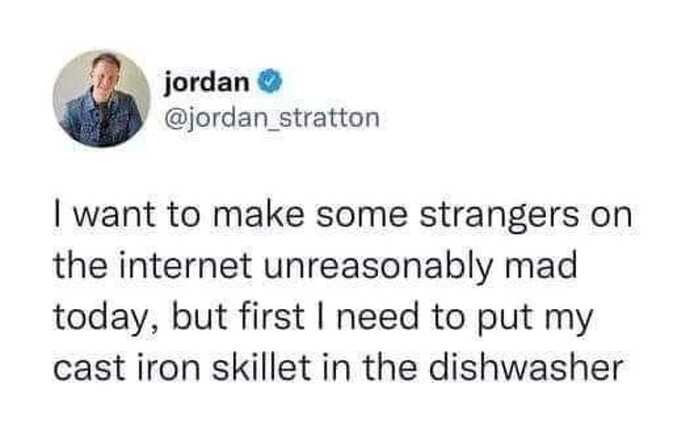 It’s not exactly the same but heavier carbon steel pans are smooth with many of the benefits of cast iron. Omlettes etc slide right off the smooth surface.

I have yet to find an economical smooth (non enamled) cast iron pan as well.

I just got a badass wok and fully tempered and seasoned it. It’s been great so far!

Ok, ok since you asked, I’ll post photos of the process. 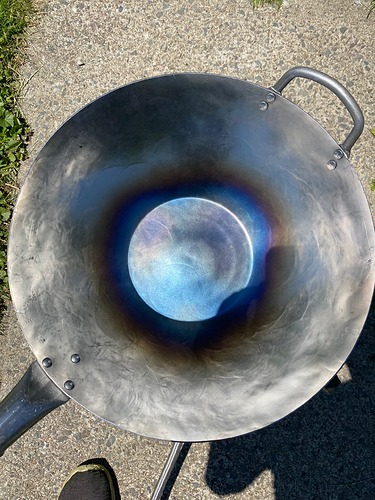 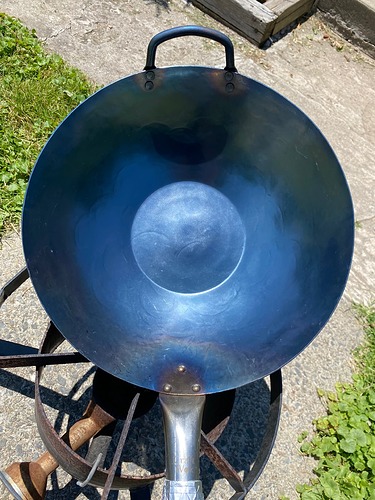 The first coat of oil: 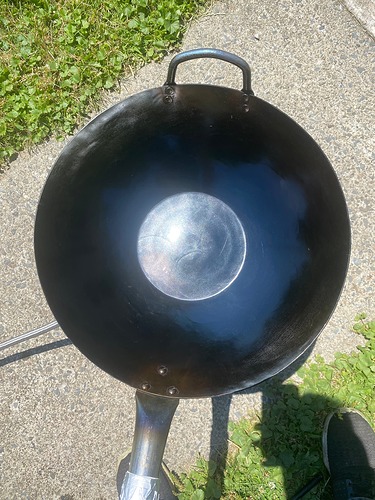 I soaked a paper towel and wrapped it in aluminum foil to keep the wooden handle from burning, then finished it in a beeswax oil: 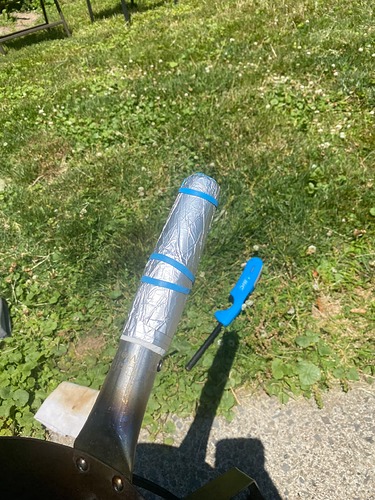 One of my aunts loaned her cast iron pots and pans to a neighbor who needed them for some celebratory occasion. When they were returned, nu aunt discovered that they had been scrubbed. All that “seasoning” obliterated.

Here is another super sus pan and 6.5M views:

When I got my totally shitty looking Wagner Ware for $1.75 or whatever from Goodwill it looked like someone had completely carbonized E.T. having shat on it. Decades of awful, and it cleaned up fantastically. This pan. and the Guga one, look like they had 3 nights soaked in water within 1.5m of the ocean.

Ooh I “need” one of those outdoor burners. I’m currently working the slow way into a patina on my new carbon steel wok which isn’t exactly fast up the sides with an electric element. I might have to put the blowtorch on for more concentrated heating, rather than just for cooking. 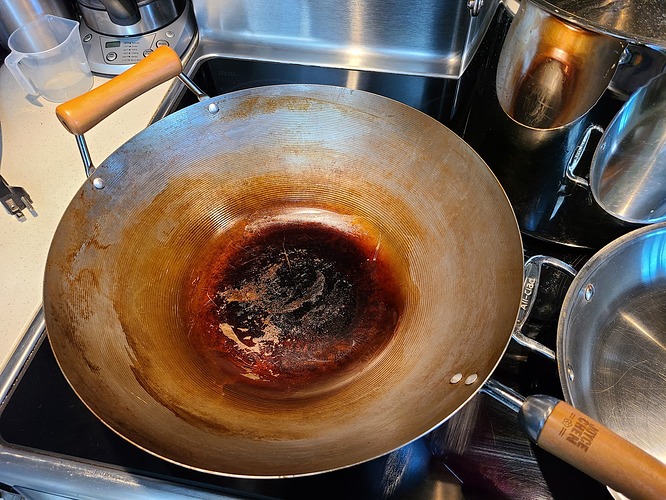 Can you remove the wood elements, coat with Pam and toss in a BBQ?