Gun control defeated in Senate. #Orlando means nothing if you're paid by the NRA

Just to show they’re not a one-issue party. they also went to the mat today to protect discrimination against LGBT people. 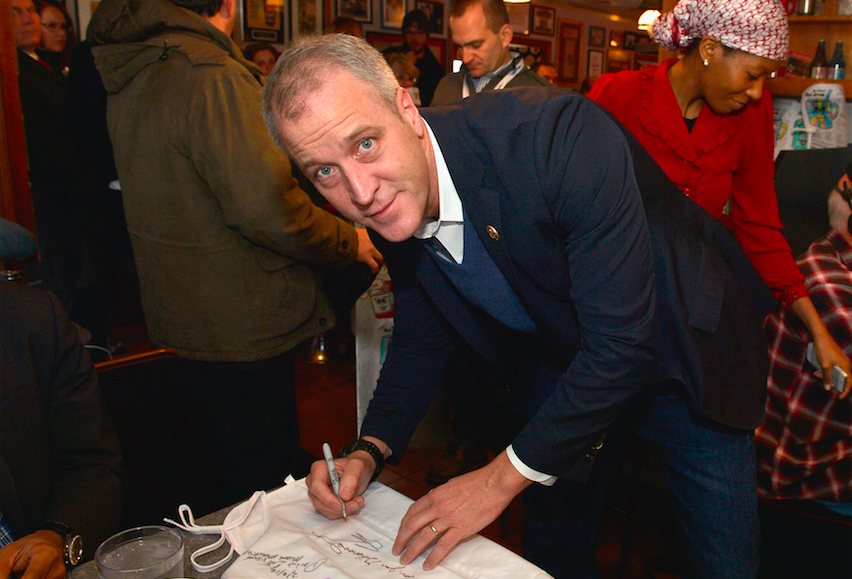 And people wonder where someone gets the idea that it's okay to open fire on a room full of LGBT people. Perhaps it's got something to do with the actions of people like Rep. Rick Allen of Georgia who, prior to a House vote on an LGBT...

BB anti-gun bias is showing again. Although 4 measures were listed as having been voted down, implying all 4 were killed by Republicans, all I see mentioned are 2 of the 4. I see no mention of the two proposals voted down by the Democrat side of the aisle.

o The SHIELD Act: If an individual who (1) is a known or suspected terrorist, or (2) has been the appropriate subject of a terrorism investigation within the last five years, attempts to purchase a weapon: The Attorney General or designee has the authority to delay the transfer of a weapon for up to three (3) business days while relevant law enforcement agencies conduct an investigation.Federal, state, and local law enforcement officials are notified immediately so they can monitor the situation. A U.S. Attorney could permanently block the transfer upon a showing of probable cause before a judge that the individual is involved in terrorism. Further, the Attorney General or designee then has the authority to immediately take the prospective purchaser into custody if a judge determines there is probable cause that the individual is involved.

o Sen. Grassley’s amendment, that would reauthorize and improve the National Instant Criminal Background Check System, incentivize states to submit relevant mental health records to NICS, and require law enforcement to be notified if an individual is either currently being investigated for terrorism and attempts to acquire a firearm, or has been in the past five years.

Both amendments were blocked by Democrats on a 53-47 vote.

“Isn’t one of the primary purposes of our government to protect American lives?”

We have a history of profit over lives, especially when it can be marketed as protection from evil.

So do we try these same ones again or do we go for an assault rifle ban now?

These were crap laws, opposed by the ACLU due to their racist, unconstitutional nature. You’re talking about criminalizing people, almost always minorities, based on nothing more than law enforcement suspicion. Not an arrest, not a trial, not a conviction, not even an accusation of wrongdoing. Just the suspicion that someone could one day commit a crime.

I don’t know how anyone on the left can support this crap.

Well, heck, one of my senators, Thad Cochran (R, MS) received a check for $250,000 from Bloomberg in his latest campaign for re-election. I guess there is a possibility that you can’t buy votes. If the NRA was buying off Congressmen, there wouldn’t have been a bill put forth to vote on. The NRA lobbies for gun rights, yes, but the American people write on the ballots and pull the levers on election day. After the old assault weapons ban of '94 was passed, the American voters cleaned house, and the current crop of politicians remember it and don’t want to lose their cushy jobs.

None of the bills would have been useful at all in preventing any gun crime to a determined criminal or terrorist. If you search for anything about the Terror watch list and the No-Fly list, you’ll find that there are hundreds of people who are on the list because of a clerical error and even more false positives. There is no oversight to the lists, no judge determines who’s on the lists. It’s nearly impossible to be taken off the list whether you’re on there on purpose or not. You would be denying all of those people their rights to own guns as well as to travel unheeded on an airplane.
The other two bills would have done nothing to change the background check system, they were just feel good measures.

Thanks for wasting all those tax dollars on feel good measures, money that could have gone into drug rehab or mental health care reform.

It’s not our fault that the government is just so kid-gloves protective of white Christian/pagan domestic terrorists.

You mean the watch lists, the same ones BB condemned here:

FBI and AG sued by American muslims over no-fly list

Four of the plaintiffs are US citizens, the other a permanent resident. They say that their rights have been routinely violated by a secret, unaccountable terrorist watchlist system.

Big Data Kafka: US Government Watchlists and the secrecy whose justification is...

Big Data Kafka: US Government Watchlists and the secrecy whose justification is a secret

And whose concept is condemned here:

And the ACLU has said, “government watchdogs have found that as many as 35 percent of the nominations to the network of watchlists are outdated and tens of thousands of names were placed on lists without an adequate factual basis. To make matters worse, the government denies watchlisted individuals any meaningful way to correct errors and clear their names.”

And: “A bloated, opaque watchlisting system is neither fair nor effective. A system in which innocent people languish on blacklists indefinitely, with their rights curtailed and their names sullied, is at odds with our Constitution and values.”

Is now awesome and we should restrict what is an enumerated right with out due process or trial because someone put a name on a list?

If the NRA was buying off Congressmen, there wouldn’t have been a bill put forth to vote on.

So because the NRA may not successfully buy off every politician, then it can’t be said they’ve bought off any? What are they wasting so much money on Congress for if they’re not getting anything for it? Strange how they would keep pumping money in if they didn’t think it was effective…

A law completely biased an unfair, and they still couldn’t interest the Republicans in it!

[quote=“Phrenological, post:9, topic:80150”]
It’s not our fault that the government is just so kid-gloves protective of white Christian/pagan domestic terrorists.
[/quote]America is racist, not just the government. And whoever’s fault it is, we should keep in mind how laws like this will actually play-out in this country.

It’s all well and good to say these wouldn’t have done anything to prevent more gun violence, but you know Congresspersons don’t just vote on legislation but can actually write and propose legislation too, right?

Fine, don’t pass these four particular laws. But these Congresspersons aren’t making their own suggestions other than making the situation worse by wanting to loosen restrictions that would enable more gun violence.

This is like healthcare all over again where the Republicans complained about the ACA after they had control of Congress for so long that they could have passed a healthcare bill that they did purport to like. But they did nothing when they had the chance.

Conservatives:
The unmitigated champions at doing nothing. And regular first-place takers at doing things that harm everyone except their rich buddies.

I am all for gun reform but as both @GideonTJones and @Mister44 have pointed out, this was a slapdash solution that would only have further encouraged racial and ethnic profiling. We have enough of that already, thanks.

The ideological stance of today’s Republican party is that government doesn’t work—and they dedicate their careers to proving it. Their inertia on this issue isn’t surprising, regardless of how far deep in the NRA’s pocket any given Republican legislator may be.

I think it is unwise to support the idea of secret lists, secret laws, and secret courts just because one hopes that these things will be used only to torment people on the other side of the political spectrum.

On the way home, I heard one of these wise Republicans on the radio saying that he didn’t have time to investigate how the terrorist watch list operates, and if Democrats wanted to vote on it they should allow time for investigation and debate.

This is the same watch list created 15 years ago when the Patriot Act was passed, and he hasn’t had a chance to read it yet. He did, however, have a chance to vote for reauthorization of that which he hasn’t read in 2005, 2006, 2010 and 2011. Because terror you know.

All that means is that the list needs to have a clear, understandable method of putting people on it and getting people off of it. That is the ACLU’s conclusion as well.

After all, that same enumerated right is restricted when you are on other lists. Like, for example, being a convicted felon. That was the whole point of background checks.

In any case, if you support such a watch list in the first place (as all of these Senators do), it is irrational and arguably corrupt to declare that everyone on it has a right to own a gun.