Where the chances of someone being able to get their hands on a Reaper Drone to pair with a pilfered manual are pretty slim,

Hmm. They need the communications technical manual. It’s just another networked toy. How secure is the Milnet of Shit anyway? 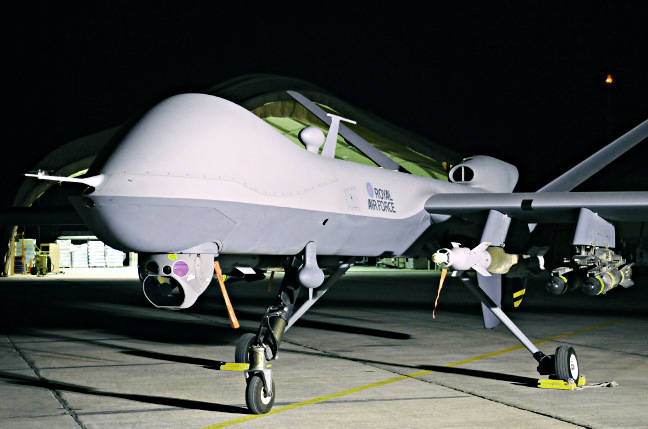 Wow, so servicemen forget to change their default logins too

accessed the document through an Air Force Captain’s under protected home network:

I’d be willing to wager that the Chinese had the manual a long time before the good Captain brought his home.

How secure is the Milnet of Shit anyway?

I’m not finding a link easily now with all the drone news in the last few years, but there was a story awhile back about how the Taliban were picking up the video feeds from drones overhead with an ordinary laptop and a COTS programmable radio chip and using it to avoid the areas that were being observed at that moment. The feeds were unencrypted for better performance in low-bandwidth situations so all you needed was the frequency. (I assume they switched to some kind of frequency-hopping or encryption as I haven’t seen this mentioned in awhile, but JFC on toast, how stupid can MIC engineers be? “We don’t need no steenkin security, the ragheads don’t even know what a laptop is, hur dur!”)

“We don’t need no steenkin security, the ragheads don’t even know what a laptop is, hur dur!”

Being that most drone operations are piloted from INCONUS I imagine that many more manuals are kept on home networks. (or were)

If only we knew a rogue archivist, …

The good Captain is also done and will likely face a court martial and dishonorable discharge. If he’s lucky there won’t be jail time. That document should never have been on his home network. It should never have left the maintainer’s facility. It’s also almost certainly proprietary info for General Atomics as well as being sensitive unclassified.

I suspect there’s a SCIF at Creech AFB being torn apart at this very moment by DIA, and some other three letter folks.

That’s a nice bowl of word salad, seasoned with some tasty acronyms.

Less tasty than you would suspect…

Perhaps. But all those empty calories really do give the impression of meaningful content. Nice work.

Do you need an explanation? Google is up last I checked.

No. I don’t. That’s why I recognise it as word salad.

No. I don’t. That’s why I recognise it as word salad.

Uh, yes, you probably do, @Dennis_el_Campesino is simply contributing to the thread by describing what’s probably happening right now, which is helpful for those who may not be intimately familiar with the repercussions of the captain’s poor attention to security protocols, (and I don’t mean his router configuration).

If their release of the documents help people on the ground avoid being murdered, while attending weddings or funerals for example? That’s all for the good.

Well sure … except … why the fuck would you have an ‘unclassified sensitive’ document (whatever the fuck that is, since UNCLASS SENS isn’t a real classification) in a SCIF?

Like I said; word salad. A jumble of magic words in a way that superficially seems to make sense but is actually just self-aggrandizing bullshit.

Well sure … except … why the fuck would you have an ‘unclassified sensitive’ document (whatever the fuck that is, since UNCLASS SENS isn’t a real classification) in a SCIF?

Like I said; word salad. A jumble of magic words in a way that superficially seems to make sense but is actually just self-aggrandizing bullshit.

I.e. exactly where one would expect to find such a document. There’s a huge range of documents like that. IANADO but I’m not surprised a drone operator’s manual would fall into that range. The burning question for the higher-ups will be how the document got from the drone fly-boys-and-girls site to the captain’s home where it could be easily exfiltrated. Whether DIA actually gets involved depends on who f’d up in that unit and how, but it’s not out of the realm of possibility.
If there’s a flaw in the OP it’s that the dishonorable discharge and such is not likely to happen as drone pilots are hard to come by, and even the court-martial may or may not happen, but that’s all contingent on the level of publicity and who gets embarassed along the way. I.e. all that would be SOP for this level of f’up. In this case a reduction in rank is still almost a certainty, and depending on the captain’s prior record the other two aren’t entirely out of the question either.
So, yeah, as a former service member the OP reads completely reasonably. I don’t see why you’re so upset about it?

Except that Sensitive but Unclassified actually IS an official US designation.

It covers a half a dozen different flavors of unclassified information.

If you’ve ever been in a SCIF, you would know that all information in the area is protected at the highest level that the SCIF is certified to. So, if the Captain were found to have removed even unclassified (but controlled) information from the area, they can still charge him for the higher offense, and DIA is going to be VERY interested to see what other things he may have removed.

Is that a little clearer for you?