Hannibal: Guilt is a divine beast

The trout were not eating their own tails, but rather regurgitating them. The tails were still attached to their bodies, just folded in on themselves, through the bellies, and out the mouths. This according to the show’s food stylist, Janice Poon: 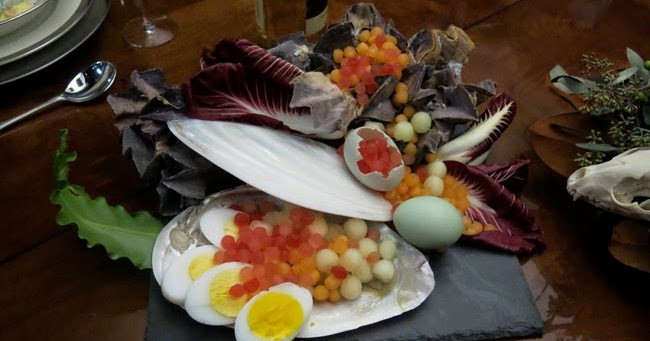 Peter and Clark Will and Hannibal. Cowbird in a robin’s egg.   Hatched or hatcheted Breaking shells won’t free them n...

I agree with the comment about the Alana sub plot. It is disappointing and seems forced. I used to like her character, not anymore, the writers have made her unlike able. Jeremy Davies’ performance was so moving and I loved the Will/Hannibal therapy scenes. Their dialogue and acting are wonderful to watch. Wished there had been some discussion about Chilton and what happened to Miriam Lass

I love Theresa Delucci’s recaps of Hannibal. By far my favorite recapping being hosted on boing boing. I’m going to head over to Tor to get her take on Game of Thrones.