Good on them, and I can’t wait for the next gen nuclear plants to come online, and that will only happen once we start decommissioning fossil fuel plants.

We mainly need to start calming our fears. Here’s a start.

Might be a bit soon for a victory hula. But getting rid of coal is a step forward for sure.

Yup, due to unforeseen supply chain and other sundry issues, oil will be the primary energy source till more renewable sources can be installed. That being said, I really like the direction Hawai’i is moving in, and with the closure of the coal-fired portion of the power plant, the landfill will no longer have to house the toxic coal ash that has been causing ecological and local resident health issues.
^___^

Totally agree. Modern nuclear is the safest, cleanest power source we have, and it’s ideal in a place like Hawaii. Unless there’s some unbelievable (actually impossible) drop in the cost of renewable energy + energy storage, it’s never going to be the 100% solution.

Modern nuclear is the safest, cleanest power source we have, and it’s ideal in a place like Hawaii

while i know don’t know enough to know, the word tsunami springs to mind. perhaps some completely safe things are more dangerous than others?

Unless there’s some unbelievable (actually impossible) drop in the cost of renewable energy + energy storage, it’s never going to be the 100% solution.

i’d be very curious why offshore wind and wave wouldn’t suffice ( eventually ) for them. there are challenges sure. and yet it’s not like truly safe, waste free, nuclear doesn’t have it’s challenges as well

You’d think geothermal energy would be ideal for Hawaii. However, there is a known and significant constituency that views such an endeavor as literally sticking Madame Pele with a long pipe.

i’d be very curious why offshore wind and wave wouldn’t suffice ( eventually ) for them. there are challenges sure. and yet it’s not like truly safe, waste free, nuclear doesn’t have it’s challenges as well

Kauai is doing really well with renewables. If you scroll all the way down, you’ll see that on sunny days, they get 100% of their daylight power from renewables (I assume mostly solar) -

About Us | Kauai Island Utility Cooperative

while i know don’t know enough to know, the word tsunami springs to mind. perhaps some completely safe things are more dangerous than others?

People have been conditioned to ask “What of something goes wrong with a nuclear power plant?” while never asking the question “What if everything goes according to plan with a fossil fuel power plant?”

How many people did the worst nuclear power plant disasters kill? Was it more than 14,000 people?

that’s more than a bit disingenuous when the choice presented is renewables or nuclear, not nuclear and fossil.

to me the arguments about nuclear are a bit like recycling plastic . there’s a big “trust us, this time we’ve got it all worked out” thing going on

truly, im not against further research and development of nuclear. but if someone gave me the power to direct the vast majority of future power investments? it would be renewables.

You’d think geothermal energy would be ideal for Hawaii.

I absolutely despise coal, which is destroying our world as we speak – heck, it even releases more radiation than most nuclear energy. Honestly I would take anything over it. Renewables are best wherever possible, but if nuclear can help us lose fossil fuels immediately I’d really like to say it’s all for the good.

But…there’s something about the way advocates for nuclear power always tell you to think about the best case scenario and not care about mitigating any risks that really gives me pause. Like, most development has at least a little consequence. Hydro and wind for instance can be harmful to local animals and should be placed with them in mind.

But nuclear? It’s always it’s fine, don’t think about it. Believe it or not, it doesn’t make it sound good.

In a classic current example, energy firm EDF seems to be hand-waving away the problem of where they’re going to get the two million litres per day of fresh water Sizewell C will need. 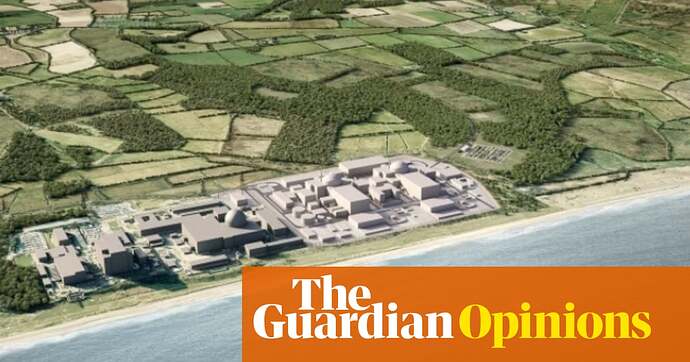 A new nuclear power station needs a vast supply of water. But where will...

Plans for the site have got the go-ahead. The knock-on effect for Suffolk’s rivers and seawater will soon be clear, says author William Atkins

Add solar to that list. Solar, wind, and tidal are all cleaner than nuclear, even the newer plants. Nuclear might not be a great choice in an active volcanic area.

that’s more than a bit disingenuous when the choice presented is renewables or nuclear, not nuclear and fossil.

At this point, my position on nuclear is “I wish things were different.” When Fukushima happened, it meant that there would be much less new nuclear power for many years.

Renewables weren’t there yet, so it would have been nice to have nuclear as a bridge to renewables instead of fossil fuels, which have a much worse impact on human health.

Fossil fuels are also heavily weaponized. Domestic terrorists here in the US are fond of using fertilizer to make their explosives, & that comes right out of fossil fuel extraction.

id add to your list that far too many wars have been fought over oil. it’s insanity we’ve waited this long for moving off fossil fuels

Renewables weren’t there yet

one thing about nuclear is the huge investment of capital needed to get them up and running. i think we could have easily started the renewable push after the 70s oil crisis no problem, it’s just they also needed a huge capital investment ( and also the oil companies didn’t like - still don’t like - renewables much )

instead, reagan years brought us “star wars”, and the bushes brought us multiple wars in the middle east. all such a complete waste

im not sure why you feel it’s a bad thing that we’re finally bringing renewable sources on line.

Always a depressing bore to see true believers leap into threads like this to direct discussion away from clean renewable energy and toward nukes.
I, for one, am celebrating Hawaii’s big day.

im not sure why you feel it’s a bad thing that we’re finally bringing renewable sources on line.

100% renewables should always have been the end goal. I’m really excited that we have more & more renewable energy coming online, especially smaller plants that can help break up the grid, & large batteries (especially ones in the form of pumped storage) which allow greater flexibility in electric delivery.

I want to see a lot more geothermal energy in the form of ground-source heat pumps. Miners & drillers should be able to readily move to drilling the holes for ground loops, which helps us get off of fossil fuels, & isn’t a facile answer like telling a 60 year old miner “learn to code.” Converting homes to heat pumps that way would provide tens of thousands of jobs similar to what fossil fuel extraction workers were doing in the past for decades to come.

Nor is nuclear good for places without large bodies of fresh water.

Totally agree. Modern nuclear is the safest, cleanest power source we have, and it’s ideal in a place like Hawaii. Unless there’s some unbelievable (actually impossible) drop in the cost of renewable energy + energy storage, it’s never going to be the 100% solution.

Renewable energy + storage is already probably cheaper than nuclear. I say probably because it’s hard to compare. Nobody knows what the actual cost of nuclear is, but the real world cost of renewables + storage for installs going on today is about on par with the estimates for nuclear construction for unproven new reactor designs that are going to be much more efficient than the ones that have already been built. Since 100% of nuclear projects in the entire history of the nuclear industry have gone over budget it’s a pretty safe bet that these new reactors will too.

Not only is it cheaper, but it’s faster. If I buy 10 billion dollars worth of solar panels and wind turbines, I can have them installed and generating electricity next year. If I buy 10 billion dollars worth of nuclear I can hope to start getting bills for cost overruns in 6 years if I’m lucky. But that time the renewable power I installed will have already displaced millions of tons of CO2 and be close to paying back the capital costs.

There will be places where renewables won’t work, and if nuclear might end up being an important power source in some areas but mostly people need to understand that renewable energy and storage have advanced massively in the last 10 years. We already have the technology to move most of the world, and certainly the US to a renewable electric grid.

BTW, I’m pro nuclear. Nuclear power can be safe, nuclear waste a solved problem, nuclear has the lowest environmental impact of any power source including renewables. Keeping our existing nuclear plants operating as long as we can do so safely is a big win. But in terms of technology we have available to fight climate change in 2022 it is just not ready despite decades of work. We have reactor designs that are approved and tested but nobody wants to build because we know they are too expensive and we have designs on paper that are unproven. If the nuclear energy industry had gotten it’s shit together 20 years ago that would have been great. Continuing to develop nuclear is probably worth it for the cases where there is really no viable alternative, but mostly a dollar spent on nuclear power is a dollar that would have dramatically more climate impact if spent on renewable power.

I would also say that focusing on the 100% solution is the wrong way to look at it. What we need is to get the 50% solution or 75% or 90% as fast as possible not start building the 100% solution that won’t do anything for a decade. Renewables can do all that.

Thorium based reactors can’t be weaponized as they don’t produce plutonium as a byproduct. They also can be set up so they can’t melt down.

The lack of plutonium is why they were never made past prototypes and uranium plants were the norm. The big obstacle to nuclear is the very large upfront cost. Still, I think if paired with other renewables, it could end all fossil fuel use for electrical grid power.