Because including other energy sources would seriously mess with the conclusion we want to reach.

Exactly why I can’t listen to that Stewart Brand guy.

Worldwide, many nuclear accidents have occurred since the Chernobyl disaster in 1986. Two thirds of these mishaps occurred in the US. The French Atomic Energy Commission (CEA) has concluded that technical innovation cannot eliminate the risk of human errors in nuclear plant operation. An interdisciplinary team from MIT has estimated that given the expected growth of nuclear power from 2005–2055, at least four serious nuclear power accidents would be expected in that period.

It seems like they can make that argument largely due to the fact that wide spread nuclear energy isn’t universal? If nuclear was universal, would we see more accidents in general? How much of this is due to how widespread a particular form of energy is as a power source? Wouldn’t widespread nuclear energy, treated in such a blaze manner as coal, for example, be cause for concern, given that accident could have more dire and long lasting consequences?

And as @Purplecat notes, they ignore renewables entirely.

Is this where I mention a Thorium based plant would be melt down proof, create less waste, waste that isn’t able to be made into a bomb, and the fuel itself easier to mine?

Though I concede they have never built a large scale reactor, I’ve yet to find reason why they wouldn’t work.

And as @Purplecat notes, they ignore renewables entirely.

Smells like they designed the study around the conclusion…

I wouldn’t be surprised that nuclear is less dangerous than coal or oil. However, there is the slight problem of where to put the spent fuel and stuff. We need a true “someone else’s backyard” for that. Heck, the USA can’t even get a storage site going in Nevada!

However, there is the slight problem of where to put the spent fuel and stuff.

There’s that too. It’s already a problem so imagine if the entirety of humanity employed nuclear power?

Doesn’t France use primarily nuclear power? Here is what it says about the environmental impact on wikipedia: In 2007, Areva NC claimed that, due to their reliance on nuclear power, France's carbon emissions per kWh are less than 1/10 that of Germany and the UK, and 1/13 that of Denmark, which has no nuclear plants. Its emissions of nitrogen oxide and sulfur dioxide have been reduced by 70% over 20 years, even though the total power output has tripled in that time. If done without environmental or health over-sight, conventional mining for uranium can produce large amounts of mining tailings and contamin...

Seems to indicate that they rely on a high level of recycling the waste? I guess France might be the best case scenario for doing nuclear power right?

Yup, it’s those very back-end costs that either get omitted or brushed aside as being negligible.

This was even the topic of an economics thesis I saw being defended about 30 years ago. The author couldn’t find (at that time) a single instance of an American nuclear power generating facility that was financially viable once the true clean up costs were included as opposed to the “predicted” value from the time of construction.

There are some interesting ideas out there for small-scale, sealed reactors that can’t reach critical mass, don’t need highly-engineered cooling, and allow for distributed sources, but they don’t seem to completely answer the disposal question.

What about renewables? In some parts of the world, wind and solar production have outstripped coal.

While homeowners are more familiar with photovoltaic solar panels, large-scale wind power is an increasingly important part of the growth in renewable energy. For the first time, the total installed capacity of wind energy in Europe now exceeds the... 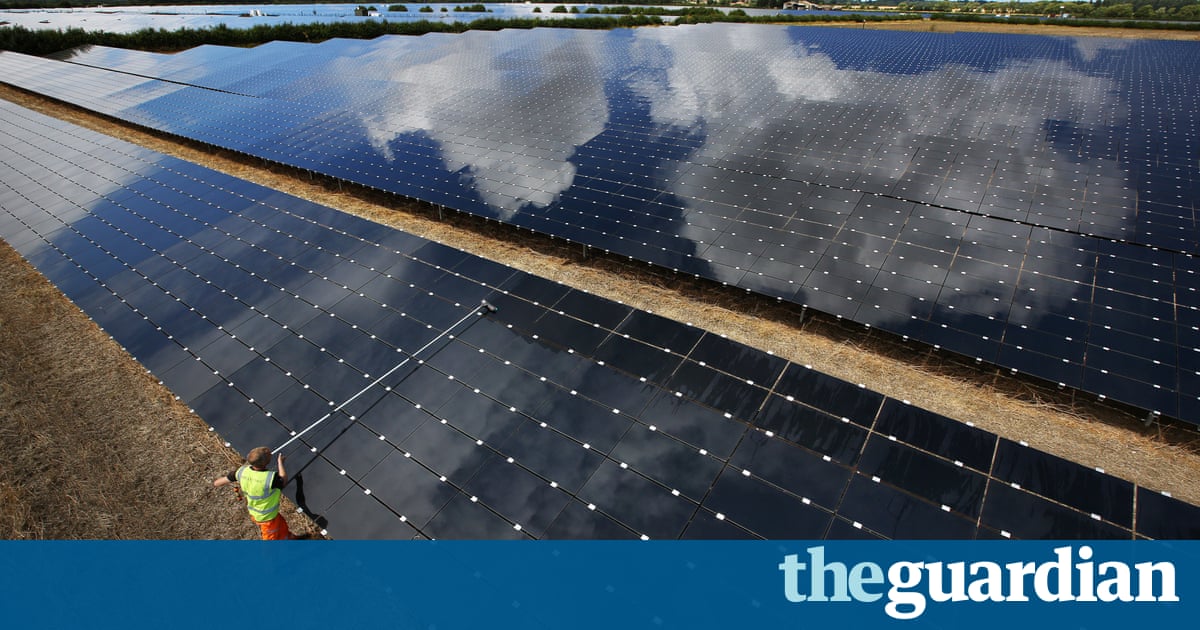 More power came from solar panels than from Britain’s ageing coal stations from April to September this year, report shows 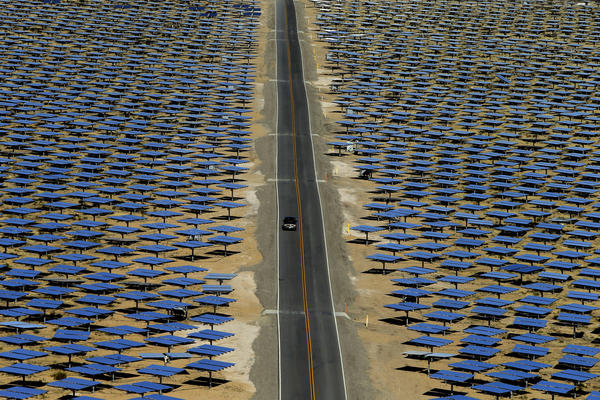 California invested heavily in solar power. Now there's so much that other...

The state's push forward on both fossil fuel and renewable plants has led to excess power — and energy that goes to waste.

Because including other energy sources would seriously mess with the conclusion we want to reach.

Indeed. Not only is solar safer with much more sizing flexibility but its also cheaper. India just awarded a contract for solar priced at less than 4 cents per kWh.

Yet another India solar tariff record of 2.44 rupees in Rajasthan

After Indian solar tariffs breached a jaw dropping US$0.04/kWh earlier this week in a Rajasthan auction, prices have dropped to yet another record in the same location.

The problem I see is there is no “perfect” solution. I think nuclear is much better for the environment than coal and oil. Certainly if we were ALL on nuclear as our main power sources, the CO2 problem would be much, much less. The waste issue and initial costs are the two main negative factors. A third being catastrophic failures (which can be engineered with solutions.) Though, again, nuclear power research has stagnated some. A Thorium reactor is supposed to have much, much less waste, easier to recycle, and lower contamination issues and can’t melt down.

I think solar will ultimately be our savior, when they are efficient enough that a house with solar tiles can not just run itself, buy give to the grid. Hydro electric is awesome, assuming you have a major river to exploit. Wind I think is a gap stop measure, but maybe if we develop better storage… but remember electrical storage, using batteries, produces not only toxic waste, but also has environmental impact being mined and created. As well as the physical foot print of both solar and wind farms. Sea and geothermal power might pan out too! But that might interfere with sea life and the mole people.

The authors concentrated on the largest usage worldwide, where statistics are available. I wonder if the statistics for renewables are difficult to come by given that renewables are relatively new. There are problems with some pretty serious toxic waste in the manufacture of solar cells, but probably nowhere near the amounts created by the ones mentioned in the article. I can’t imagine many deaths from wind power, though, except maybe to birds.

Nuclear could be the answer, if only humans could get their heads together to make it safer (and not do dumb things to increase profits over safety). For one thing, take the profit motive completely out of it, and/or regulate the hell out of it. I’m not holding my breath.

The decision is a mortal wound to yearlong industry hopes of a U.S. nuclear "renaissance."

Every nuclear facility is a sitting duck for terrorist attacks.

Is there a rolling eye emoji?

There are many economic, environmental, and logistical reasons to have centralized power plants. Because terrorist could attack it isn’t a good one to not build them.

It seems like they can make that argument largely due to the fact that wide spread nuclear energy isn’t universal? If nuclear was universal, would we see more accidents in general? How much of this is due to how widespread a particular form of energy is as a power source? Wouldn’t widespread nuclear energy, treated in such a blaze manner as coal, for example, be cause for concern, given that accident could have more dire and long lasting consequences?

The graph is scaled per TWh, so widespread-ness shouldn’t matter. And accidents would need to get 250x more common to even approach oil. This would essentially require building fleets of plants with designs that were already outdated when Chernobyl was on the drawing board, staffed by people dramatically less competent than Soviet bureaucrats.

That said - yes, omitting solar, wind, and hydro was a big mistake in designing this study. Information about nuclear’s relative safety vs. fossil fuels would have been really useful if people had been willing to listen 20-40 years ago. Today, not so much.

Smells like they designed the study around the conclusion…

All I see is a energy production chart that factors deaths from air pollution into the cost of fossil fuels. Did this chart escape here from another dimension?

Hydro electric is awesome, assuming you have a major river to exploit.

Hydroelectric is not without its problems, namely when you dam up a river, the waters rise and engulf many square miles of vegetated terrain. The trees and other vegetation will then decompose underwater, releasing metric shit-tons of greenhouse gases for several years afterwards.

Not to mention that river damming will also flood archaeological and cultural interest sites.

The nuclear chemistry of thorium -> U233 is attractive, but the physical chemistry, engineering, moderators, etc. – all the picky details that only the people working on the actual engineering see – are not nearly so straightforward.