Here’s how the 1980s got its colorful look

There’s very few design groups whose aesthetic defined entire decades: De Stijl, Bauhaus, Memphis; possibly Push Pin as well. The Memphis style filtered down into so many aspects of design and architecture. I remember seeing the '92 movie Toys and being amused by the Memphis-styled buildings and toys. By the mid-90s it defined “corporate whimsy”.

There’s definitely a lot of that design aesthetics that spilled over to the 90’s. I was born mid-80’s so i’m vaguely aware of the look of that decade but for sure a lot of those bright colors and varied shapes, etc is something that still existed in the 90’s.

I really enjoyed watching this while drinking my morning coffee.

Micheal Mann. For those who don’t immediately recognize the reference, his vehicle for this aesthetic was

check out the Memphis (or look-alike, at least) chair behind Phil Collins, here:

I’d say that Mann was not drawing solely on Memphis, anything Po-Mo was fair game and he and his design team probably had a lot of original ideas, too. But if they’re going to mention MTV (because they were first, OK, yes) I think not mentioning Miami Vice is an oversight. Leaving aside the influence of Memphis, I’d say MV was responsible for the promulgation of 80s design archetypes in its own right. If MV had a specific contribution, I’d say clothing. Not sure if the styles were original or borrowed, but everybody started dressing that way because of the show.

After Memphis, MTV, and Miami Vice’s influence became the norm, even kids could get in on the act:

I note with some embarrassment that the last one was mine

Whenever I talk about Memphis design and the 1980s people just assume I’m talking about the city. Sigh.

Absolutely – Miami Vice and the Miami beach style in general was a huge 80s design influence. It took the bright turquoise/pink/yellow color scheme, the loud patterns contrasted with clean white, and the geometric shapes and added palm trees and art deco, and it was a very natural fit with Ray-Bans, white blazers worn with t-shirts, and acid-washed jeans. Move that look to the west coast and you get Bugle Boy t-shirts and Ocean Pacific shorts.

I would have guessed Nagel

I’m 85% sure I had this one in elementary school or junior high.

I had this one, I’m fairly certain.

Huh, I never knew. I guess the ripples from this design splash spread far and wide. Behold the late-80s Centurion Dave Scott Iron Man twelve-speed. Those geometric shapes are in the Centurion wordmark on the down tube and in the badge on the head tube. And all over the catalog: http://vintage-centurion.com/sites/default/files/Catalogs/1986_Centurion_Catalog.pdf

I bought a GT from a friend and thought I was THE SHIT!

I think this one actually still looks good

@tekna2007, oh, bikes were crazy with the 80s design. my feeling was they were always a few years behind (not BMX, they were always on-trend, I mean traditional bikes) so when they adopted the look, they really went all-out. the early-to-mid 80s road bikes still look like 70s style, probably because the industry was coasting off the bike boom from the 70s (think Breaking Away) and full of people of that mind (and the customers, too) But that changed.

I wish Peter Shire had a better microphone…

My brother-in-law has an early 90s Giant Cadex (not currently rideable) with a similar style of paint job, marbled purple over black.

If you take equal parts Memphis Design, Emigre and Patrick Nagel, sprinkle in some Tower Records posters and Mtv, you’d be about 90% there.

Whereas mine was … plain blue. Sort of boring, I guess.

I found a few more. I closed the original tab but I think it said they’re a 1989 model. white saddle, bar tape, and cable housings! (purple one has an aftermarket saddle) 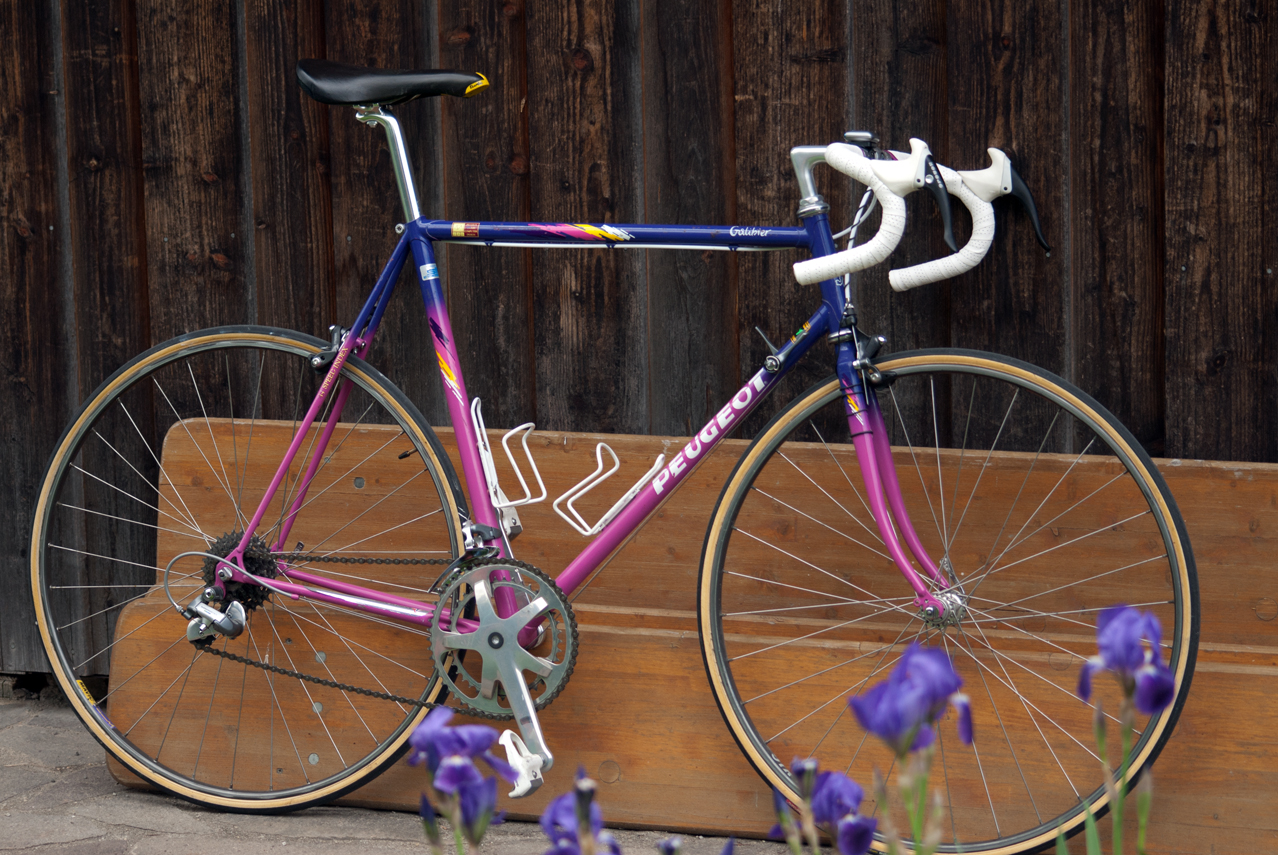