Here's a retro clip of Lucille Ball on What's My Line

Originally published at: Here's a retro clip of Lucille Ball on What's My Line | Boing Boing

Increíble. What a treasure.

In his writing, Sorkin prioritises competence and near-omniscient erudition over a sense of humour as his characters’ most important traits. It falls to the actors in his shows to bring some flair and verve to the line reads and mostly sarcastic and dry jokes, and to blur his tendency to push the characters into what he sees as righteously smug arrogance.

Sometimes, as with the West Wing, it works. In other cases, such as Studio 60 or The Newsroom, where most of the actors are unaware what they have to do with the material or just don’t have the charisma and talent, it flops.

Being the Ricardos was in a Sorkin middle ground. About half of the actors (especially J.K. Simmons but several others) knew what they had to do with their parts and delivered. Also, as a feature film rather than a series, they didn’t have to sustain that needle-threading beyond their screen time.

Being the Ricardos and Studio 60 both suffered from being dramas about comedy that treated comedy as THE MOST IMPORTANT THING EVER!!! The tone drained the life out of them. J.K. Simmons is a great journeyman actor in the Michael Caine sense. “Never turn down a check, always deliver a notable performance”

For my money, the documentary Lucy & Desi was more enjoyable and benefitted from the lack of artificial imposed drama 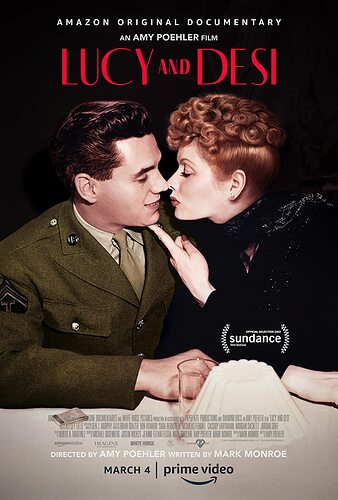 Lucy and Desi: Directed by Amy Poehler. With Lucie Arnaz, Bette Midler, Carol Burnett, Laura Laplaca. This film will explore the rise of comedian icon Lucille Ball, her relationship with Desi Arnaz, and how their groundbreaking sitcom I Love Lucy...

I think Simmons (and Caine) are more than just journeyman actors. He really nailed down what he had to do with the William Frawley part in Being the Ricardos. Nicole Kidman seemed lost in comparison, playing it exactly as you describe: “I am a professional comedian!”

I’ll second your recommendation on the documentary. Probably a more worthwhile watch for those interested in the topic.

He really nailed down what he had to do with the William Frawley part in Being the Ricardos . Nicole Kidman seemed lost in comparison

Vivian Vance was pretty much thrown under the bus in the movie. Lucy and Vivian worked together for several years after the end of I Love Lucy with “The Lucy Show”.

Why do I get the feeling that Andy Kaufman studied this clip for his Latka Gravas character?

Not a really important tidbit, but she sure had great penmanship.

Also… I’m not sure how many people are aware, but Desilu productions (Lucille Ball’s production company with her husband, Desi Arnez) pioneered syndication, and they also were one of the production companies to support Star Trek. It might have been lost to the ages if the series did not have a syndication deal…

Also taking the active choice to film I Love Lucy, as opposed to videotaping, meant there was a lasting version of the show on a cheap accessible medium. Virtually everything taped from that era is either lost or preserved in poor quality kinescope versions. Its why we have the full run of her shows but only rare copies of Playhouse 90

The amazing thing is that’s only one of the things they did right. Every aspect of the production was deeply thought out, and sometimes invented, from multiple expert viewpoints. I found this contemporary article on the details of the show fascinating.