You know what’s perfect for a hangover?

Drinking a lot the night before.
I’ll see myself out.

Hangovers suck because it means I’m not drunk anymore.

I don’t think it’s pedantic to say “reason” there should be “reasons.” Since the video describes several.

I learned for instance that ethanol AND methanol can cause hangover symptoms. And that some types of alcohol have more of the latter than others.

Yikes, methanol is nasty. It’s added to (some) laboratory ethanol to keep people from drinking it. It can cause blindness and death. Makes sense that small amounts might make hangovers worse.

After a little googling, looks like you would need to drink a several dozen bottles of red wine to get a potentially lethal dosage of methanol.

At which point you’ve already had several times the lethal dosage of ethanol. Not to mention, a tannin overdose!

Hangovers suck because it means I’m not drunk anymore. 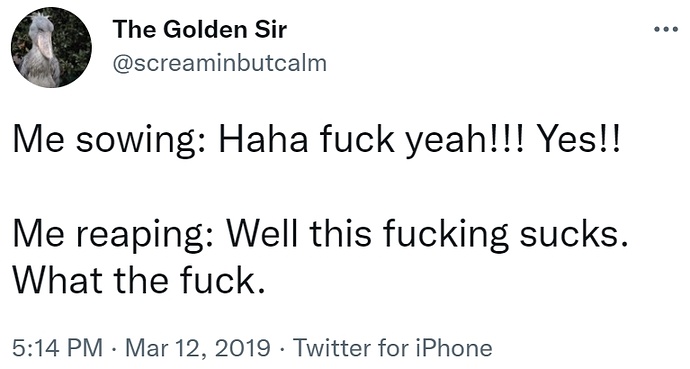 Just like the bullet, and the One Prawn, there’s a bottle of booze somewhere with your name on it. I once had such a bad hangover from one (one!) bottle of red wine, I didn’t drink for six months

I got a brutal migraine from a couple of glasses of red wine at a wedding and didn’t drink any wine, red or white, for about 3 years after that.

Reminds me of this

It takes only one drink to get me drunk. The trouble is, I can’t remember if it’s the thirteenth or the fourteenth.
George Burns

Methanol is metabolised to formaldehyde which is toxic, carcinogenic and generally unpleasant. Responsible for chronic illness in homes where it was used in construction materials.

As a distiller I am constantly regaled with people’s anecdotes of being “allergic” to products like gin “because this one time…” I usually try not to say anything, but eventually someone directly asks me why they would be allergic to certain products and not others. The answer they’re always weirdly disappointed to hear is they’re almost certainly not allergic to anything, they just drank too much. Sure, it’s theoretically possible to be allergic to certain botanical extractives, but if that were true you’d have a much more notable allergic reaction to foods containing sage, licorice, juniper and damn near any spiced food. The fact is that (most) clear spirits are the least likely to give you a hangover from the cumulative effect of ethanol plus methanol, n-propanol and other fermentation congeners; but it’s really the ethanol that does 99% of the job. The closer a product is to the original fermentation (especially a warmer ferment like ales), the more crap that’s in it, which anecdotally makes me feel shittier, but it’s overdoing it in the first place that fucks you up.

[Puts 40 bottles back.] Oh. Just when the flavor-off was getting good.