Hero EMT driver has a message for California's awful drivers

You are supposed to get out of the way of emergency vehicles. Normally this means pulling over, sometimes to the shoulder and letting them pass in a traffic lane. But in the unusual case when all lanes are blocked people stop in place, and the shoulder is clear. A friend of mine were once stuck in the boundary between the first cars that got to the accident which pulled off to the side, and the later cars that stopped in their lane. We ended up toing and froeing to let each piece of emergency equipment through.

Truckers used to police this, pulling right to block “the most important person in the world is me” shoulder drivers, and left to allow emergency vehicles to pass. I don’t know if they still do, but it was effective.

I taught both my teen drivers: if the shoulder or break down lane are clear, pull over for emergency vehicles if they are in the primary lane(s). If you cannot see them, but hear the siren…then stay put right where you are and they will move around you without issue.

On a multi-lane freeway you generally want to stay in your lane of travel and maintain a safe speed. If everyone tried to pull over to the right/to the shoulder it would cause a jam.

Emergency vehicles can and will get around traffic, using the leftmost lane or shoulders as necessary. If you’re cruising in the left lane, get the fuck out of it.

The Germans have the right idea: 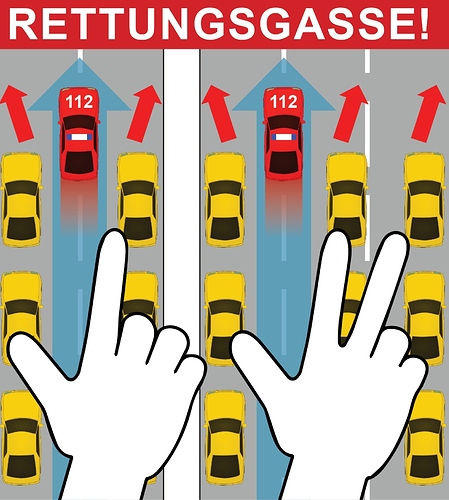 exactly. From time to time emergency vehicles in our state do use the right breakdown lane, but most often its the left side…just stop/slow to a crawl and let them move.

Here in Virginia they just updated the “Move Over” law to include a charge of reckless driving, a Class 01 misdemeanor, for failure to yield to emergency vehicles.

In the early days of video games, only one step across from space invaders and crazy climber, there was a driving game where you lost points if you didn’t get out of the way of the ambulance and gained points if you did. I blame this behavior on the lack of appropriate video games.

I have no idea what RETTUNGSGASSE! means but I’d love to see a video of an ambulance driver yelling it over the loudspeaker.

I have no idea what RETTUNGSGASSE! means

Rescue lane
Retten is to rescue.
Gasse is a lane or alley.

This all the way, maximum legal width for a vehicle in most countries is 8ft and typical lane width on a highway is 12ft. It should be frikkin easy to make enough room for emergency vehicles on a multi-lane highway!

Crazy idea: outfit ambulances, police cars, and fire engines with cowcatchers. If you’re blocking an emergency vehicle on call (lights and sirens going) and they have to “nudge” your vehicle out of the way with the cowcatcher, the operator of the vehicle that got “nudged” is responsible for any damages that their vehicles or others affected by their vehicles suffer.

maximum legal width for a vehicle in most countries is 8ft and typical lane width on a highway is 12ft. It should be frikkin easy to make enough room

Some states make them as narrow as possible to squeeze in space for breakdown lanes on both sides. The lane width on the Garden State Parkway makes me feel claustrophobic every time I have to drive on it.

That’s a nice theory, but when people are bumper to bumper in rush hour traffic in LA or other parts of So. Cal, nobody’s going anywhere. The rescue vehicles need to use the shoulder (just like the “I’m so much more importanter than everyone else” crowd).

And here’s one in action:

Getting this level of cooperation and adherence to the rules of the road would be a long way off with the drivers we have around here.

I have seen people pull it off bumper-to-bumper on a freaking bridge.

It’s very doable if all drivers are willing to cooperate.

Sure.
You’d just need a lot of extra ambulances to deal with the casualties in the “cleared” vehicles.

You’d just need a lot of extra ambulances to deal with the casualties in the “cleared” vehicles.

And rather larger and more powerfully-engined ambulances, I fear.