Hex key wrenches with ball ends are the best

I have two sets of these (metric and imperial) and have to agree they’re good.

The plastic case holds them tight enough that they don’t fall out but not too tight that they won’t come out at all, and hasn’t loosened over time even on my most used keys.

The keys themselves aren’t showing any wear either, even after almost two years of use

Those are indeed very handy when the ball end is needed.

But I also have a set of straight end hex screwdrivers, since starting a hex head screw with a straight screwdriver is a lot easier than with a ball end screwdriver, as it doesn’t flop around on the driver, but rather it aims straight into the hole. Also, the ball end strips much sooner than a straight end does.

TTL;DR You can never have too many tools.

I’ve had this one for a few years:

Very happy with it. It’s twice the price, but very good (made in USA) quality. And you get 8 more wrenches. The additional sizes see use only rarely, but when you need them…

Haven’t used them much yet, but I have other tools from this company and they are good quality for the price. Mostly made in Japan. These are ball end too and very handy. Not for heavy duty use, though. I bought these from Ebay .

I can’t describe the awesome. But Pedros makes good tools.

Bondhus makes a great product, you can find combo inch/metric /folding sets for like $20 at times.

If there is hardware blocking the wrench access, that is a good sign that whatever you are working on is poorly designed.
But as for hex wrenches, I would advise splurging a little and going with Bondhus, or even Wiha or Elora. Even fairly high end hex wrenches are pretty affordable. Cheap ones will start to develop a twist, round off or even break, but good ones last forever.
My favorite are Elora hex sockets. I have a full set, and love them.
Also, it is an enormous time savings to keep some of this on hand- https://www.amazon.com/3M-08578-Black-Strip-Calk/dp/B000PEZ1L4
If you put a tiny bit of this on the wrench or in the hex part of the bolt, the bolt will stay stuck to the wrench until it is started. It never hardens, so it can always be cleaned off.

I use a lot of Tekton brand tools for car restoration. I find their price to quality ratio to be really good.

I find the socket type are also very useful 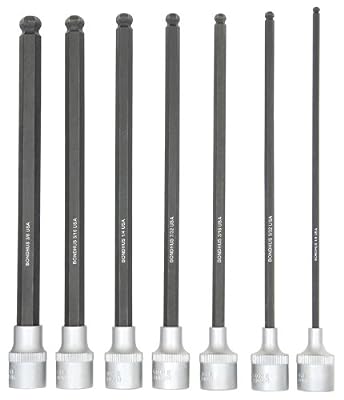 Very cool! I always wondered what the ball end was for. Two items in my toolbox that have come in surprisingly handy are the flexible claw grabber (for picking up dropped screws in tight places) and the hose pick tool for separating stuck hoses, scraping, etc.

If there is hardware blocking the wrench access, that is a good sign that whatever you are working on is poorly designed.

Some machines just require balls to work on them.