IAAL and I bet half of my best ideas come when I’m walking down the hall, or getting a snack, or staring off into space. The work of putting down keystrokes is by far the trailing indicator of my value.

There are down sides to being a remote contractor (paying both sides of the payroll taxes, mostly) but the up side is that if anyone ever suggested something along these lines, I would just laugh and laugh and laugh.

Imagine a manufacturing manager that reported the machines were all turned on, but had no idea whether anything came off the assembly line all day. They’d get fired on the spot. But when HR managers try to do more or less the same with presence monitoring tools, they somehow get away with it. An actual functioning brain is not, it seems, a requirement in departments tasked with managing the most complex asset a company has, its employees.

This is all stuff we heard in reports from the USSR. Taxi drivers needed to travel a certain number of miles. Raise the back of the cab and let the motor run with the transmission engaged. Shoe makers need to make a certain number of left shoes. Why bother making any right shoes? The US has been sovietized. Remind me, who won the Cold War exactly?

These have existed literally for decades, mostly to defeat policy-pushed workstation & server console idle locks. The policies began as security measures in case you walk away from your desk and someone takes the opportunity to do nefarious deeds on another’s logon.

Kids these days have it easy!

It took me a whole day of messing with AutoHotKey scripts, some freeware VNC, and ImageMagick to build a system to text me when my boss IMed me on my workstation (which you could only detect by screenshot) so I could play video games in the den on the alternate Friday I got to work from home.

Or the old school oscillating fan attached to the mouse 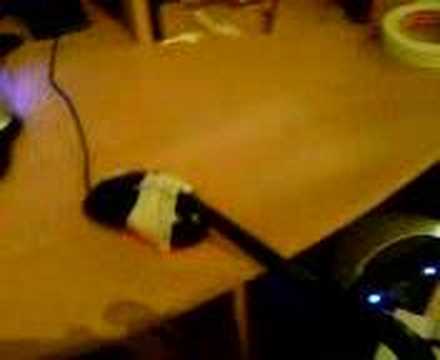 I’ve found that displaying this image on an old android phone, locking the screen on, and putting an optical mouse on it creates a free(ish) mouse jiggler.
Spoiler set to reduce flashing.

Homer had it figured out. (Almost)

I think if you’re actually using something like this then it’s probably time to look for another job.

Fun fact: the MouseJiggler was originally invented by WiebeTech to allow cops to move a desktop computer without disconnecting it or powering it off. They have a contraption called HotPlug that allows unplugging from the wall socket and transferring to a UPS so it can be impounded and used for forensics.

The US has been sovietized.

I wish. The soviets were killed off in the 1920s, the Marxist-Leninists were their own counter-revolution. If the US was genuinely sovietised it would resemble something like anarcho-syndicalism or council communism.

Remind me, who won the Cold War exactly?

Capitalism won, and now we are realising that we need some form of socialism (not Marxism-Leninism!) to avoid exploitation.

How is it TikTok that drives the change here? I can learn about all of these thingamajigs in other places. In fact I just have.

These have existed literally for decades

So have millennials. We also usually don’t use TikTok and are pushing forty. Maybe update your lexicon of condescension.

That is legitimately awful to look at, definitely a good call to blur it out.

I heard an old story of a shop where the supervisor would look down a line of desks to make sure every draftsman’s pencil was moving. One guy taught himself to keep his pencil moving while taking a nap.

No real condescension intended unless you interpret the term itself as pejorative. The intent was mild snark, not condescension. I even have some friends who are millennials.

But then “a joke isn’t funny if you have to explain it.”

So you have a point. Boomer is inaccurate with the labels.

I’ll punish myself by finding a TikTok explainer on intergenerational shaming.

“LOL”
(Did I spell that right?

I suspect that a nontrivial percentage of ‘productivity monitoring’ software deployments are done by the technically incompetent(or demanded by the technically incompetent and then executed with grudging disinterest by IT who aren’t going to refuse a direct order but would vastly rather be making things work than applying the snake oil one of the suits bought or getting roped in to soothing someone’s anxiety about 'metrics), and some of the software is probably also minimum-viable garbage put together by abject hacks; but I’d be very, very cautious about using software circumvention measures against someone who has an agent on the relevant computer and is openly engaged in adversarial monitoring.

In the sort of environment that would do that it’s not unlikely that merely running unauthorized software, much less doing it with intent to pollute the precious metrics, would be excuse enough to get rid of you; and, unless you are doing it at a level on par with decent quality malware authors, it will be pretty trivial to observe that your credentials are being used to run a fairly well known class of automation utilities that the people who write white-collar spyware probably also know about.

If it’s just about giving some inveterate shoulder-surfer a ‘dashboard’ to fret at since he doesn’t have human targets within walking distance anymore you might well get away with it; but against anyone who actually cares the only sensible assumption is that activity monitoring will include process monitoring with at least matching against a library of well-known signatures, potentially also heuristic detection of unknown utilities based on checking up on who is unexpectedly using the SendInput API an awful lot and similar.

Even with a hardware solution; one would want to be a bit careful. I’d assume that most of the cheap mouse-jiggler dongles out there have deeply generic hardware IDs, if only because it takes more effort to be distinctive than not; but I’d be a lot more comfortable after I’d verified that the vendor isn’t using their own distinctive VID and has instead used exactly what some plausibly cheap and common actual mouse reports; because enumerating endpoint hardware is also really easy, if you care.

i see a dancing chicken.