"How a Mosquito Operates" is a 1912 animation by Winsor McCay

Originally published at: "How a Mosquito Operates" is a 1912 animation by Winsor McCay | Boing Boing

For those that want an advert free view of the short film click below (full screen for best viewing):

I didn’t see the film on my device, perhaps it’s my browser or perhaps the author forgot to imbed the film or link.

It very much looks like a student animation, something that I would have seen at any time in my life, and that’s a compliment. I love how the frames are recycled/looped back-and-forth to give the illusion of having physical depth and as a way to stretch the animation out.

Still not a fan of mosquitos, despite their best PR attempts.

It may look like a student animation to us now but keep in mind that McCay had no teachers to guide him. McCay was beating his head against a hell of a learning cliff compared to a modern student.

This was before innovations like “putting the characters on transparent acetate so the background only has to be drawn once instead of being traced onto every single frame”. Or even “drawing the characters on a piece of paper that’s then cut so that most of the background isn’t obscured”. There’s a hundred and ten years of people thinking of ways to make animation between this film and now.

You guys could have included a link to the animation instead of a still image:

It wasn’t meant as a slight, just an observation in style. (I was in the middle of adding an image when I saw your reply and added a little clarifier to my verbiage.) I do get that this was done before all the knowledge and tools, even what we would consider primitive tools, existed. I should have been clearer.

Some years ago, a friend of mine completed their formal education in film and animation. During their time working towards their degree, they did several film and animation projects. One of my favorite conversations with them was about how much they appreciated old animation and how on well planned much of it was. They also really appreciated the amount of work that went into those old animations. Back then the film and animation festivals were IRL, and that was a lovely shared experience, but it was a lovely time as I knew people that loved that work so much, that they were creating and entering festivals and contests, and those friends always had recommendations for what to go see and insight on the process- often shared over a pint or at a 24hr diner.

But this is off the main topic. I love finding people’s artistic works from ages ago, and this one seems to give me a lot of joy. I especially loved the expression on the man’s face just after they wake the first time after being bit. I think it captures how I think I look when ever I am awaken unexpecdetly.

Now I’m off to doge mosquitos.

OK, so when the mosquito enters the apartment via the transom, was it necessary to draw a butt?
Or is this skeeter bollocks? 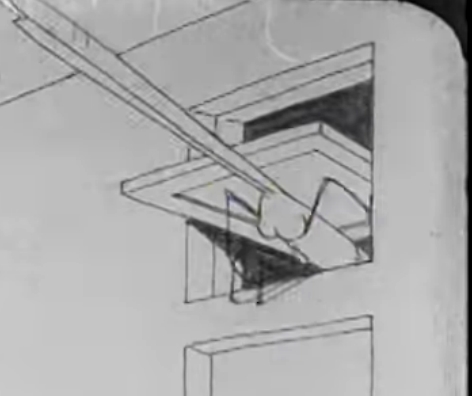 This is just the nightmare of a man who ate rarebit for dinner.