How can Canada protect its democracy when America becomes a fascist theocracy? asks Waterloo professor

Originally published at: How can Canada protect its democracy when America becomes a fascist theocracy? asks Waterloo professor | Boing Boing

One of the major plot points of The Handmaid’s tale is the wave of refugees in Canada from the US. In general, Canada seems better about accepting refugees… But that could be an outcome, too.

trying to flee the United States

Except that it won’t be the United States any more. The most likely outcome of the new American civil war is that the states break up into a whole bunch of independent countries, much like the former Soviet Union did. In which case, they’ll each be putting up their own border walls to keep out refugees from other states (much like the plot of The Water Knife).

I imagine that there would be a limit to how long that hospitality would last if millions of Americans were flooding the border crossings seeking asylum, though…

The most likely outcome of the new American civil war is that the states break up into a whole bunch of independent countries, much like the former Soviet Union did.

None of which would be likely to remain as economically or socially stable as a non-civil-war-ravaged Canada. So you’d still probably have millions of people hoping to move north.

Seeing the recent developments in western Canada and the current trucker fiasco, it’s safe to say that the tides of right-wing extremism are not held back by the border between the US and Canada.

If Canada can maintain sovereignty, it might stand a chance of maintaining some semblance of a democracy. When push comes to shove, the 'murcan empire’s death throes are not going to be gentle. The power elites would benefit from Canada will becoming a full puppet state, with the US milking its natural resources for all they’re worth. It’s already bending that way to some degree.

When that fascist theocracy switch gets toggled, let us know. 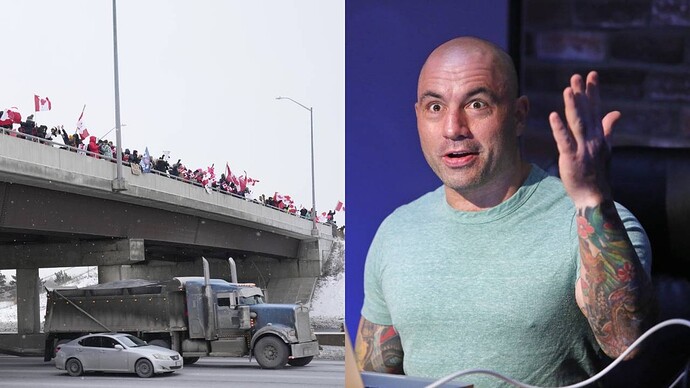 A right-wing convoy is heading toward Ottawa to protest vaccine mandates—along with every other grievance you can think of—and for some reason, it’s become a big deal in the U.S. too.

How quaint - hacked data from the ‘Christian’ fundraising site GiveSendGo shows that America’s far right are determined to drag Canada into the abyss with them:

‘The leaked data showed that more than 90,000 donations were made via GiveSendGo, with most funds appearing to come from Canada and the US. According to the data, individuals in countries including the UK, the Netherlands, Ireland and Denmark also donated.’ 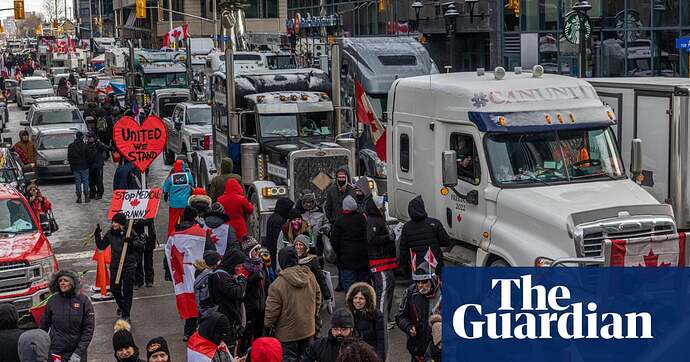 Exclusive: leak shows more than half of donations to convoy protest through GiveSendGo came from US

That is silly, we will release the strategic moose reserve.

Okay, as someone who looked into immigrating to Canada (from Tennessee, to Vancouver), I think there are some realistic things that people are just not aware of. One of the biggest hassles I ran into was that my spouse would not be allowed in on just the basis of my being married to her. Even if I qualified for a high skilled job, my lawyer told me that “Canada doesn’t want leeches on society. And they enforce it.” So that was the first problem, while I qualified, there was no way to get her in until I became a citizen, at which point I could sponsor her. That was a six to ten year prospect.

So I brought up, “what if we played fast and loose with the rules? Surely Canada’s version of CBP is easier going than what everyone thinks ours is like?”

And he was like, “Don’t even suggest that to me. One, I would have to report my clients that do that or I face disbarrment. Two, if you violate canadian border laws in this manner, you can be banned from the country for ten years and forever banned from citizenship proceedings. I don’t know what you think our country is, but we maintain one of the strictest border control policies in the world. If you’ve been ARRESTED for drunk driving, you are not going to be even allowed to enter the country. Your options are either she gets in under her own skilled job classification, or you visit her no more than 2 months per year for the time it takes you to be a citizen.”

So in reality, maybe we’ll all come in as refugees, but this belief that they are a more forgiving border is going to be a tough pill to swallow for a lot of people, and a lot of us might not actually end up in Canada if we attempt to flee for refugee status. We may end up in Europe, Central America, Mexico, or China.

Right next to the strategic maple syrup reserve.

I suspect our willingness to welcome refugees might be reduced dramatically when a percentage of them immediately start complaining about socialized medicine and their right to walk around the coffee ship with an assault rifle.

Because you know those guys will be coming too, and they are not welcome.

The other issue that sprang to my mind is which of the successor states would control the many overseas military bases the United States has?
Places like American Samoa and Marshall Islands are going to have make some tough decisions too I would imagine.
Goodness, it won’t be much fun for anybody.

Goodness, it won’t be much fun for anybody.

That’s pretty much a given when a global empire ends.

I think many Canadians would feel that Americans had done it to themselves, regardless of whether that’s true or not, and would be unwelcoming towards them as a result. However, Americans actually suffering from government persecution would likely be welcome to immigrate, as well as those who are skilled and/or wealthy enough to support themselves.

However, Americans actually suffering from government persecution would likely be welcome to immigrate, as well as those who are skilled and/or wealthy enough to support themselves.

Theoretically that’s the same policy the United States has for refugees right now.

The most likely outcome of a new American Civil War is the same as the last.

Cause Texas doesn’t have aircraft carriers.

Taiwan, Europe and Japan aren’t going to opt for trade with Alaska over the The United States, however much of it operates as a unit.

California isn’t gonna just peace out and have it’s own separate insurrection.

NATO isn’t gonna sit back and see how this all works out.

The idea that the natural outcome here is a break up into multiple states. Presupposes that any rebels win.

Or that everyone else shrugs enough to bargain some chunks of territory away.

But the whole second civil ware fetish is completely inextricable from calls for out and out race war. And that whole January 6th thing was a play for the whole, not some break off ethno-state.

The most likely outcome of a new American Civil War is the same as the last.

Cause Texas doesn’t have aircraft carriers.

Even if you sliced and diced the country into a bunch of smaller territories there would be plenty of infighting within the individual territories.