How many Psychiatrists does it take to describe Batman villains?

Originally published at: How many Psychiatrists does it take to describe Batman villains? | Boing Boing

By the rules of DC, the mental health practitioner trying to understand the rogue’s gallery is automatically now a member of said gallery.

Will Robin escape the clutches of the Head Shrinker? Will Batman diagnose the clues in time? Does Bat Insurance cover such therapy? If so, what’s the Bat-copay?

To answer the headline with a punchline,

“What is a villain, really?”

“Does the villain have insurance?”

The only mental health practitioner in the D.C. Universe I can think of who didn’t turn out to be a villain himself was Dr. Bartholomew Wolper from Frank Miller’s The Dark Knight Returns. He was just presented as an idiot liberal for his naive belief that vigilante violence isn’t the best way to deal with mental illness (because Frank Miller). 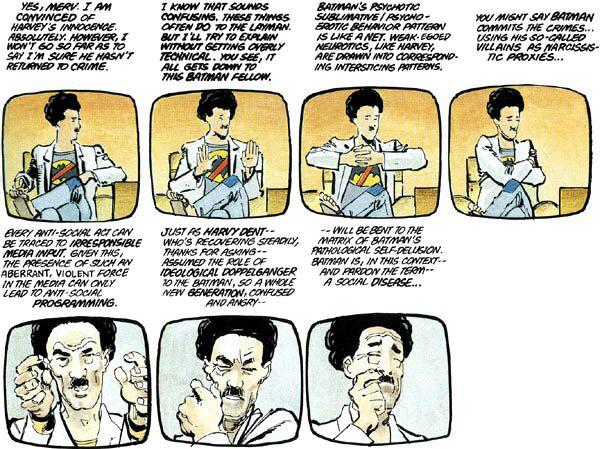 Exactly. Every single shrink in DC is terrible! Other than a few nameless background characters who typically get killed off. I wonder if social workers fare any better? I can’t remember any DC social workers offhand but I’m going to have to do some digging. I have to imagine they’ve got their own sets of issues, what with every random hero being allowed to just take home a teen/pre-teen orphan out of GCPD’s lost and found.