How the Arpeggio works

Ooooooo tempting. I have been interested in getting into synths for a while now, and can see how this could easily fit in a rig.

Sadly, I want something right now, and the Arturia Microbrute is looking veeeery interesting.

The first dedicated arpeggiator & sequencer in one portable device.

I would say that this is debatable. It depends upon how one defines “sequencer”, since an arpeggio is a sequence of notes. I used to use my Cyclone for arpeggiations, as well as other kinds of sequences. But:

There are no screens or menus. All controls are at your fingertips. With an interface so simple, you can let your intuition take over.

…certainly does not apply to the Cyclone, which is amongst the least-intuitive UIs ever.

What puts me off is no mention of how to define scales. If I am not using the same number of notes per octave that they are, these “intuitive” buttons become not-so-useful. Which is another reason I no longer use my Cyclone either.

By “sequencer” they probably mean that it also functions as a step sequencer, specifically. It’s an easy feature to include since it’s easier than the arpeggiator, and occupies minimal firmware space. The tricky thing is that I love sequencers, but I despair over step sequencers. And 99% of the sequencers people offer are of the step variety.

You’ll get a lot more out of a Microbrute.

This just doesn’t look very exciting to me at all. Granted, hardware step sequencers just don’t interest me – the editing options in software are just so much better – but even if they did, I’m really not convinced this is a particularly good one.

And the sound engine is pretty poor compared to a Korg Volca Keys, or a Microbrute or… almost everything, honestly.

I chose guitar a long time ago.

Oh yeah and 1mm picks of differing materials depending on mood.

You philistine. 0.8mm nylon or gtfo.

I find the thinner picks lose articulation at higher speeds.

I play anything from Bach to Zeppelin to Eagles and find for me, the 1mm tortex and jazz 3s work nicely.

I have experimented with a Mexican peso for zz top material but I find it too bright. 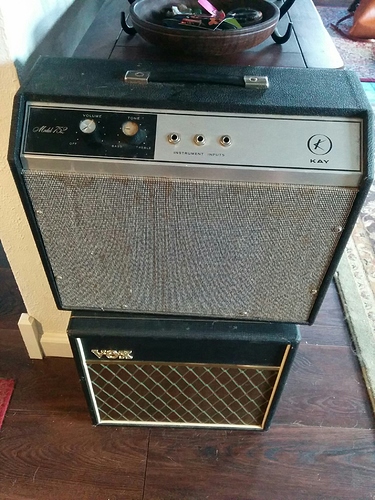 I’m not a jazz guitarist (jazz saxophonist and classical clarinetist), and I love old understated gear. That 752 is maybe ten watts or something. More than enough for me.

(The vox below is a very nice sounding reissue)

I find the thinner picks lose articulation at higher speeds.

Oh, and yes. You have to pinch them to increase rigidity if you want to go really fast. But that is also why I like them, since you can go from Freddie Green to ZZ Top to Steve Vai in no time.

Is that Kay a tube amp?

I had a Kay guitar many years ago and an Eko that was almost identical.

A different aproach, but if it works, who’s to question right?

Assuming that by “software” you mean software running on generalized hardware, rather than an embedded device, I agree. But the timing has been getting much worse over the years. I think that standalone units are a viable option compared to most PC+MIDI interface options even just for reduced latency and jitter. But then one needs to commit to a UI and algorithm, and most of them don’t do what I need.

Anyway, the step sequencing and sound engine are very much besides the point of what is basically an arpeggiator. MIDI utilities don’t need to sound like anything.

Well. My process is 95% in the box, with VST plugins and currently just one outboard synth (but planning to expand it by one or two soon, through a charity auction).

I don’t always have timing issues, but when I do it’s because some effect I really want to use introduces 2048 samples of latency and I have to compensate one way or the other.

MIDI latency and clock jitter have never given me trouble.

just giving you a friendly Internet elbow to the shoulder :).

It is an old Kay, and sounds great. Clean on the low, with great distortion when you move up. I just love old under powered amps.

I worked in a stored that had a late fifties Gibson amp, again only a few watts, but it was the quintessential ZZ Top sound. Just not loud.