Oh yeah, the too many Chiefs, not enough Indians problem. I’ve seen that one before…

The problem would actually make more sense if the castle was where it should be; on top of a hill. That way, messengers are the only method of communication for the two Generals, one on each side of the hill; and so unable to see each other’s position or receive visual signals*.

*For the sake of the example, this situation is taking place in a very windy part of the world, so that smoke signals are out of the question.

I’m a bit confused about how this online order problem actually is a Two Generals problem, and how Tom’s explanation of idempotency tokens translates to the ‘pure’ TGP. Such a token solves the issue of not sending x orders of food where only one is required. Taken back to the generals, it would solve the issue of “not attacking x times where only one attack is required”. But since we can assume that the attack is a one-time, irreversable thing, this doesn’t gain anything for the generals regarding their main problem. They would still have no ultimate confirmation that they’re on the same page about the time of attack, or would they?

The last American soldier left here Wednesday, abandoning a base surrounded by tall cedar trees and high mountains, in a place that came to be called the Valley of Death.

The near daily battles here were won, but almost always at the cost of wounded or dead. There were never enough soldiers to crush the insurgency, and after four years, it became clear that there was not much worth winning in this sparsely populated valley.

Closing Korangal Outpost in Kunar Province, a powerful symbol of some of the Afghan war’s most ferocious fights, and a potential harbinger of America’s retreat, is a tacit admission that putting the base there in the first place was a costly mistake.

Combat Outpost Lowell, near Kamu, Afghanistan, was named for Army Specialist Jacob M. Lowell, who was fatally shot while on patrol in 2007. Soldiers erected Lowell on the grounds of a small castle in a canyon beside the Landai River, swift and green. It had been an Afghan king’s hunting lodge. Americans surrounded the mini-fort with Hesco and reinforced some of the stone walls. The position, home to fewer than 100 soldiers, was ringed by mountains and about as defensible as the bottom of an elevator shaft.

The New Archaeology of Iraq and Afghanistan | History | Smithsonian Magazine

Or is it too many chefs and not enough onions? 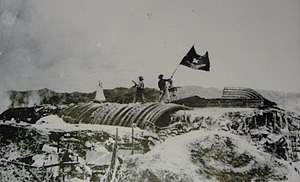 @smulder and @Jorn_C, thank you for the examples. The answer to my questions seems to be, “People who lose.”

The inimitable James Mickens on the related Byzantine Generals’ problem: