How to build a house out of shipping containers

Does it seem weird to put a regular stick-built house inside a metal box? Like maybe we’re missing the true potential of a shipping container?

Back on deployments in a past life we used to call these Container Housing Units or “CHUs”. They were widely derided because of their lack of comfort. Remarkable to me that people now live in them by choice.

True potential of a shipping container is to ship things across the ocean.

You need somewhere to put insulation and wiring. Most of these containers aren’t insulated. It does reduce the available square footage, but I don’t see another way to make a livable house.

wasn’t it established the last time that though this looked and sounded cool it wasn’t?
impossible to regulate the temperature, the wrong shape, too small, and not as durable as you’d expect.
still, an admirable marketing campaign, at least.

Thank you. 'Shipping containers would be great for affordable housing" is one of my pet-peeves. Answer: 'No they bloody wouldn’t, virtually everything is wrong with shipping containers in regards to the needs of housing.

I would think that the biggest hurdle to doing this, especially in California, is the building permits… I wonder how he got around that. I have a friend who lives in Davis, CA, who was told by the building department that the shipping containers he was using for storage on his remote ranch had to be removed because they weren’t up to code. They’re tough enough to be stacked 50 high and cross the Pacific, but not to house his workshop.

Most of these containers aren’t insulated. 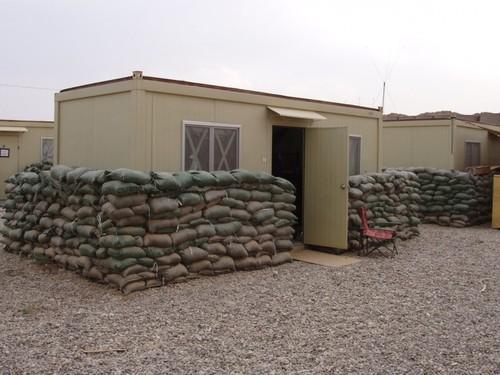 If it was my awkwardly-sized metal box, I would use an uninterrupted layer of continuous rigid insulation, then a layer of horizontal wood slats as the finished interior surface. The wood slats aren’t structural, so they don’t have to be that beefy. I would probably run the electrical in exposed metal conduit mounted to those slats, or somewhere else.

Something like what is used to screen the stairs in this pic: 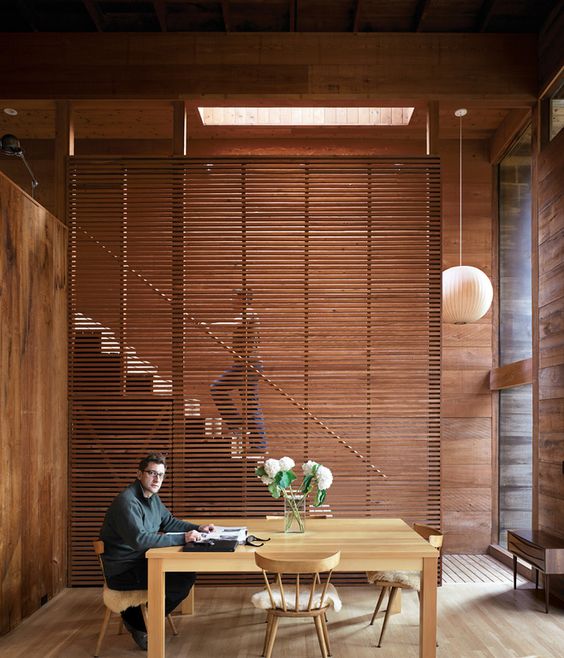 Could he claim they were temporary structures and so not subject to code? That’s what the tiny house people often do.

Re: how these guys got around codes–it looks like they’re building in the desert, which may help them avoid prying eyes.

Still cheaper to use wood, even if wood is twice as much as it is today. Plus, S.C. are not for hot climates or severe cold climes, the insulation it takes to make them livable is egregious to your interior space & wallet.

Could he claim they were temporary structures and so not subject to code? That’s what the tiny house people often do.

If only the building codes were that rational around here. He had a bit of a battle over it, and eventually just got rid of them, and replaced them with something far more janky and dangerous that nontheless made the city planners happy.

Re: how these guys got around codes–it looks like they’re building in the desert, which may help them avoid prying eyes.

Agreed, and that was my first thought too. But if that’s the case, the prying eyes have now found him…

And it doesn’t take going viral for them to find you, the property owners around here dread the day the new Google Satellite imagery comes out, because the code enforcers study every inch looking for new structures.

(Incidentally, that’s why they vote Republican. Has nothing to do with racism or whatever, at least among the Trump voters I’ve met in person. They just hate irrational regulations, which they associate with Democrats).

A few years back I saw a really nice one built by students from the The Missouri University of Science and Technology:

There is plenty more to the building code than just structural sufficiency. As long as you meet all the rest of it too, you can use them.

I like the idea of the wood slats, but how do you attach them to the insulation? You have nothing to nail to. Also, you’d see the printing etc. on the insulation through the slats. I do like that your insulation is continuous.

My thinking is that the slats would be an independent “floating” structure inside the insulation. I feel like it’s important not to penetrate the insulation. Fewer thermal bridges to the metal shell, and better control of airflow.

The rigid insulation they use in the video has a metallized reflective layer on the interior side. My first thought is to just let that be underneath the slats. It would take best advantage of the reflective properties. I really can’t picture what it would look like, though. Maybe some other treatment would need to be applied so that it doesn’t look like hell.

For the ceiling, maybe glue a thin layer of baltic birch plywood (or your material of choice) to the insulation, and design the slat structure such that it supports the load.

It just bugs me that they have this totally free-standing weatherproof structure and the first thing they do is frame the inside of it with 2x4s. Probably in the next episode they’ll shingle the roof as well.

One of the videos goes into permits and he paid over 25k in permitting, engineering plans etc.

One of the videos goes into permits and he paid over 25k in permitting, engineering plans etc.

$25k for all permits seems incredibly cheap, especially for such a non standard structure. Often in CA the permit fees for things other than standard houses can rival or exceed the thing someone is trying to build. Maybe things are a little more lax in the high desert.