How to catch a fish using a mouse trap

I was going to call this out as equipment overkill but, admittedly, trout tickling loses some of its appeal when there’s ice to contend with.

(And am I correct to presume that the rural American practice of feeding body parts to catfish, I’m guessing to obtain enough of a meal to support the healing process, doesn’t really apply in ice conditions either?)

If you catch a catfish with a mouse trap, does the Tom and Jerry theme song start playing spontaneously?

That “guy” was clearly meant to be Bigfoot. The way it just disappears instead of walking behind the tree implies it was added post-production. I wonder if that’s a running gag of his or something. 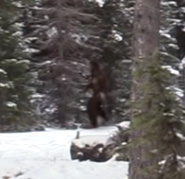 Did anybody else see someone in the background doing a silly walk and then disappear starting at 2:54? Just me? Please don’t let it be just me…

Yep. See my post above, it looked like it was an intentional gag by adding a Bigfoot figure to the background.

How to catch a fish using a mouse trap

… a trap designed to catch other edible, living things …

Just how bad have things gotten at the Bellamy household?!

Catching a mouse with a rod and reel would be quite a trick.

One time, when I was a kid, I accidentally caught a vole in a fish trap.

I didn’t consider the possibility that a fish trap being stored on land would catch things; so when I came back several days later the poor little guy was dead. I felt terrible about it.

Working a Cowichan sweater like that was a dead giveaway he’s Canadian. Head to his channel to subscribe and turns out this cat’s an hour down the road from me!

The one piece of back-country wisdom I would like to know regards what you do about dentistry in the middle of nowhere.

There is so much that I’m finding hard to get my mind around in the U.S. right now…

no doubt your concern is warranted…

Also, what’s the deal with the guy in the top left corner of the video, two minutes, fifty-five seconds in? He just kind of melts into the tree. Creepy.

Was anyone else disappointed that the mousetrap was placed on top of the ice instead of going into the water?