Steep slope, apparently, but it could only be ten feet or so above the ground.

the older lifts at the ski area i go to still have chairs with no bars, and even on the chairs that DO have bars people only tend to put them down when there are kids on them. i will say this, though: those chairs in the 60s look VERY small compared to the ones we use today. i’d be holding onto something for sure.

I know. There are lots of chairs like this in smaller resorts around the country, including where we ski in Alaska. I was putting my arm across my kids’ laps as recently as last winter. At least the kid in the picture can sit cross-legged with her butt more than 4 inches away from the edge. When your kid has a sizable fraction of their body weight in boots and skis pulling on their legs and the chair starts to rock a bit, it’s freaky!

i’d be holding onto something for sure.

My sphincter, for starters.

those chairs in the 60s look VERY small compared to the ones we use today.

Our asses were a lot smaller.

The secret was, don’t lean forward until ready to exit the lift. Crazy right?

This summer I went on a kids’ Ferris Wheel at Toronto’s Centreville, with my 5-year-old son. Each seat had a safety bar, but if you managed to lean forward far enough, you’d definitely fall out. It was five minutes of terror for me and we at least had that bar. Even looking at that photo makes me panic.

And yeah, my son was totally fine with it all.

speak for yourself! lol

The secret was, don’t lean forward until ready to exit the lift. Crazy right?

But don’t lean back either as that makes your butt want to slide forward!

Well, the first step is to put a lock on the time pod like a responsible adult. That’s just common sense.

Well, glad you were okay. Plus with me it was in the “whatever” early 80s so when I angrily asked my dad what happened, expecting him to talk to the lift operator, he just shrugged it off and did nothing.

As a teenager when we went skiing as a group the larger quad chairlifts didn’t have bars either- just a long 4-across seat. It always sucked being on one of the inner seats as you had nothing to hang on to and my friends would deliberately body check and try to trip you getting off.

I’ve ridden ski lifts of all kinds as an adult and have never worried about falling off. Where I repeatedly fail, however, is getting off the damned thing at the top of the hill. Multiple times: falling on my ass, skis all pointed out every which way, and they hit the big red button and the entire lift grinds to a halt, probably sending many people slipping and sliding out of their seats.

I’m a terrible skier. I just don’t belong anywhere near a ski.

Or a tennis racket.

Luckily it wasn’t high off the ground at that point and there was plenty of fluffy stuff under me. 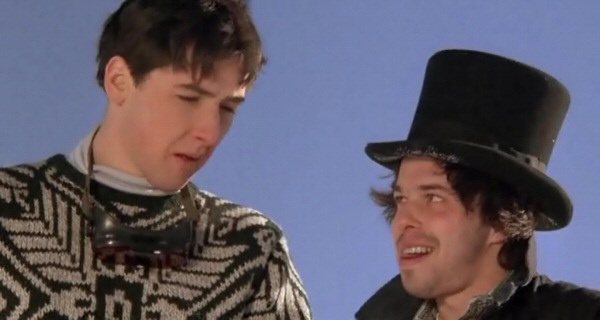 My God. How did I manage to reach adulthood?

And you know, all the way up, the kid in the picture was saying “Stop it mom! I’m fine! You’re embarrassing me.”

My parents had a big blue econoline van for a while. There were no seats in the back so me and my friends would sit on upside down milk crates in the back. Obviously they were not secured to the floor.

Also it had an eight track and my parents had this Chick Corea album that had some Star Wars themes on 8 track which I thought was pretty cool. Or maybe I made that part up.

Much fewer safety-related agencies and regs back then.