How to ship a 6-inch neodymium magnet

…but then, I calibrate “hazardous” with stuff like dimethylmercury… It’s good to keep things in perspective.

How in the world would you remove a magnet like this from your refrigerator? Seems like you would have to kiss it goodbye after you would attach it to something made of steel.

I’d suggest gently heating the refrigerator above its Curie temperature while cooling the magnet.

That’s the problem with the label “hazardous”— hazardous to whom? In whose hands?’— to which dimethylmercury would respond ‘All living things’ and ‘I don’t give a shit about morphology, I just need access to your epithelium’.

That’s the problem with the label “hazardous”— hazardous to whom?

I think @shaddack is being a little over-restrictive in his definition of hazardous. Dimethylmercury is exceedingly toxic. When I was involved with such stuff I used to keep HF in my private safe because I didn’t want anybody playing with it - it looked so harmless in its plastic bottle. They are both hazardous substances in the H&S domain. But wiping credit cards or rust drives, killing watches, trapping fingers and so forth are still hazardous in a “you don’t want to do this” way. The definitions of the word “hazard” are context sensitive and do not all imply a direct threat to human life.

I think @shaddack is being a little over-restrictive in his definition of hazardous.

It’s good for mental health and for getting things done.

But wiping credit cards or rust drives, killing watches, trapping fingers and so forth are still hazardous in a “you don’t want to do this” way.

“You don’t want to do this” overlaps well into the “mildly annoying” scale.

The definitions of the word “hazard” are context sensitive and do not all imply a direct threat to human life.

I’d put the cutoff to anything you can’t fully recover from in a day or two. Minor lasting scars don’t count.

Thee folks in Texas have good prices on irresponsible magnets. I went to them when designing my own motor for a nutating subreflector for our radio telescope.
http://www.magnet4less.com/index.php?cPath=1_5&osCsid=b74ee3965d3761e08f662e809ada422a

I’d suggest gently heating the refrigerator above its Curie temperature while cooling the magnet.

Unnecessary. The point here is that it takes two things to create a decent force in this case; a magnet and a ferromagnetic substance, to complete a high-permeability loop. The more magnet, the more ferromagnetic material you need.

This is a problem you may easily experience. This is my time tested solution.
Assuming your refrigerator isn’t stainless steel, the mild steel of the case is pretty thin. As a result most of the flux doesn’t pass through it and so the clamping force is much weaker than it would be if the steel was thick. Then there is the layer of paint which creates a non-ferromagnetic region, weakening the field through the steel still further. (If the case is A2 stainless, the permeability is much lower than for mild steel anyway.)
So the way to remove the magnet in this situation is actually very simple. You need a non-ferromagnetic knife (316 or A4 stainless will do nicely - though you can do it with an ordinary steel knife with a little less convenience. I have used Swiss Army knives in the past with A4 blades) and a supply of ordinary paper - Post-It notes will do. Force the sharp blade of the knife under one pole of the magnet till it lifts enough to insert one post-it note. Keep forcing and adding post-it notes till one pole is off the case by the thickness of a post-it note. The attractive force is already much weaker. Repeat until you have a thickness of several post-its. You can now more easily repeat this at the other pole. Wrap the magnet in a towel and tip it over sideways against the case. Cover the exposed poles with more of the towel. Remove the magnet carefully, ensuring that it is fully wrapped in several thicknesses of towelling. This is actually much quicker and simpler than it takes to describe.
If you do not have a convenient knife it is sometimes possible to wrap dental floss around a pole at the base and pull on it hard enough to start it going between the pole and the metal case.

It is left as an exercise for the reader to remove a large Alnico magnet used in beta-ray deflection experiments from a smooth, uncoated Mumetal plate without damage before the demonstrator gets back to the lab. Hint: penetrating silicone oil is your best friend here.

Excellent advices, I’m doing it pretty much the same. The silicone oil trick is new to me.

Easy for the tiny, hard-drive class magnets. May be less easy with the six-inch behemoth.

I’ve never dealt with monstrously huge magnets, but I’ve dealt with some pretty strong little neodymium ones. Typically if I have one, say stuck to a screw in my desk or the fridge, I get a piece of steel, stick it to the exposed top of the magnet and it’ll be easier to pull off whatever it’s stuck to. Maybe something about how the field’s shape gets changed by that, or probably just leverage. As long as the “prybar” is “bigger” than whatever the magnet’s stuck to, it feels easier to pull the magnet off.

ay stuck to a screw in my desk or the fridge, I get a piece of steel, stick it to the exposed top of the magnet and it’ll be easier to pull off whatever it’s stuck to

A lot of those magnets have one pole at each end so your advice works. I was referencing U-magnets.
Concentric U-magnets, with one pole the centre and the other the circumference, of course, are utter pigs and they normally have a screw hole in the middle so you can attach them to a handle or bar. Inevitably the time someone gets them stuck to a lathe bed is when the screw is missing. Fortunately with lathe beds there is something to use as a fulcrum for a suitable piece of 2 by 4, but it is still necessary to have the towel available to stop the thing bashing something else.

I’d put the cutoff to anything you can’t fully recover from in a day or two. Minor lasting scars don’t count.

In the UK any injury resulting in three days or more off work has to be reported to H&SE.

However, the author of that excellent book Ignition never had anybody in his lab take time off for injury. It did occur to me to think that with the kind of stuff they were handling, the range between no harm done and lethal injuries was probably extremely small; minor to moderate injuries were probably very unlikely.

That was a GOOD book.

Having the respect to things with stored energy is important. (As important is knowing where less respect is due, so we won’t waste most of our attention on the unimportant stuff and then get the attention fatigue and make a mistake where it matters.) 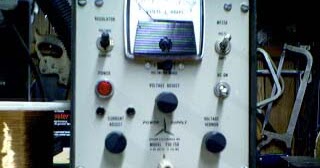 If you're working on serious projects there are often serious risks.  A lot of these can be mitigated by preventative measures and safety ge...

That’s nothing compared to dihydrogen monoxide, which kills hundreds of thousands of people around the world every year.