How to turn your mobile display orange for better sleep

If you think that blue light’s effect on sleep is hokum, or that this orange film will not help anyone sleep better, please use the comments as your personal anti-woo crusader soapbox!

One thing I really respect about Mark is that he rolls with the shit he takes in the comments (sometimes better than others) and will update his posts if he’s convinced he was wrong. It’s pretty admirable.

According to Harvard’s all light can impact production of melatonin, blue light is marginally worse. Blue light has a dark side - Harvard Health

Light at night is bad for your health, and exposure to blue light emitted by electronics and energy-efficient lightbulbs may be especially so. At night, light throws the body's biological clock—the circadian rhythm—out of whack. Sleep...

I personally just dim my display as much as I can stand. Solves the same problem and keeps my battery a little more full.

Alternatively you could rock the Walter look in bed at night

I wouldn’t say I place much stock in the whole blue-light-paranoia thing, but I have Nitto-taped over nearly every blue LED in my home because they are just absurdly bright.

Interesting, have never heard of this non-blue light thing for night-time.

Haven’t tried this, but i use my android phone with the kindle app often. What helps me immensely is minimum screen brightness then inverting the colour scheme from black text on white to white text on a black background. Much easier on the eyes as you get the minimum amount of screen area giving out light

I’ve a router like that, the LEDs are clearly visible even with a layer of black electrical tape plastered over them, the things are like lasers…

I jailbroken my phone so I could install F.Lux so my screen would have 3/4 less blue and 1/2 less green.
Now I sleep better and can go to bed when I want with no issues.

It really helps to work for longer hours without feeling nausea or soaring eyes… less migraines too.

There are F.lux type apps for Android, although I haven’t really looked into them. The one I used briefly (don’t recall the name, I’m afraid) didn’t really get the color curve right; F.lux looks like you’re viewing a printed page under natural orange light, but this one looked much more like, well, like someone slapped an orange theatrical gel over the display.

Failquail’s technique of using Kindle’s white-on-black feature with low brightness works fine for me. (And note that an Android set to automatic brightness control will go to the lowest setting in a dark room, so if your Kindle app is set to use system brightness you won’t need to mess with it otherwise.)

I think for a given wattage, blue LEDs are 20 times brighter than other colours. I have a USB charger that is so bright that it’s possible to read by its light in a dark room. Black tape did nothing for that one, so I glued foil over it.

F.lux is the thing I miss the most when my iThings aren’t jailbroken. Having it around certainly makes it a hell of a lot easier to read stuff on the Kindle app in bed.

As to whether it’s woo? My personal anecdata is that I find my urge to stay up until WTF-o-clock vanishes when I have f.lux on everything. Unless I play something on the 360 or PS4 in the evening, neither of which has f.lux…

and will update his posts if he’s convinced he was wrong. It’s pretty admirable.

Unless of course there’s an affiliate-buck to be made…

I think for a given wattage, blue LEDs are 20 times brighter than other colours. I have a USB charger that is so bright that it’s possible to read by its light in a dark room. Black tape did nothing for that one, so I glued foil over it.

A more involved alternative is replacing the LEDs with some sane color. I had a bedside USB hub with integrated clock that had blue backlight of insane brightness. Replacement with a weaker yellow LED took just a few minutes.

Thats what I do with my Nook, minimum brightness and white text/dark background and I have definitely noticed when i wake up at 2am and am in the nope not going back to sleep soon mode and go off to read that I don’t stay awake all night like when I used to turn on a lamp and end up finishing whatever book I was reading.

From the journal article itself:

Sorry, Mark. With an N of 12, you don’t know anything. You’ve been taken in by marketing. Allow me to suggest you spend some quality time with: 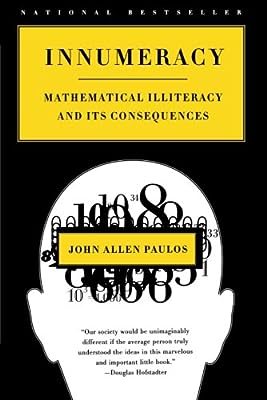 Innumeracy: Mathematical Illiteracy and Its Consequences

Why do even well-educated people understand so little about mathematics? And what are the costs of our innumeracy? John Allen Paulos, in his celebrated bestseller first published in 1988, argues that ...

It’s really funny to see people so unconcerned with light colors. It’s like saying that shining a flashlight in your eyes feels exactly like looking at an eggplant on some velvet under (reasonably soft) halogen lighting.

I will clip an LED from a lower voltage device like a USB hub or something, but I’m wary of clipping them from anything connected directly to the mains.

I’ve used Twilight on my Android phone for a while now. It’s works just like f.lux. Who knows if it helps my sleep, but it doesn’t bother me at all. It comes in subtly enough that I don’t notice it.

I usually am apt to pounce on woo. Who doesn’t love thrashing some homeopathy or reiki nonsense? But this doesn’t smack of woo to me. I use a Phillips blue LED light therapy box. It helps me get through the short days in winter. I suffered chronic seasonal depression until I started using it. The bright blue light helps me envision a bright blue sky which makes me feel happy and energetic. I just installed the f.lux app, and it’s helping me feel quieter and closer to being able to sleep. It might just be association of bright blue light with daytime, and thus awake time. Whatever the root cause, the effect is real enough. Many thanks to Mark!

I will clip an LED from a lower voltage device like a USB hub or something, but I’m wary of clipping them from anything connected directly to the mains.

Most of the stuff connected to the mains is internally low-voltage. The power supply unit tends to be a fairly compact area on the board, or even entirely separated on its own board. LEDs directly connected to mains exist, and I used that in a small handful of things I designed, but they are rare and you can find that out by the curious absence of the power supply (no 400V cap, no input diodes, no transistor, no ferrite core transformer…).
In case of doubts send me a photo of the board/internals.

You have 12 anecdotes. That’s quite more than nothing. Not entirely reliable, though, but provides indications.

I use a Phillips blue LED light therapy box. It helps me get through the short days in winter. I suffered chronic seasonal depression until I started using it.

I use a 100-watt metalhalide lamp in a homemade casing (a computer PSU box with the large top fan as a chassis, a polished stainless bowl as a reflector, a welded 20x20mm steel tube frame for carrying - huge overkill but thinner steel is a bitch to stick-weld and I have some stock left from another project) as my winter light. Works pretty well, and has a naturally slow ramp-up of the light intensity when powered on, so also good for waking up. (Todo: computer-controlled relay so it can be switched on on command/timer.)