How would Reagan React?

I think that might be the way to get to neocon trumpeters. Regan is their patron saint and could do no wrong savior of america slayer of communism.

How would he react?

Thanks for the save guy.

He’d defer to Nancy who would defer to her psychic…?

Pee on the rug and kill a couple of priests?

Love Regan or hate him I feel he is spinning in his grave over how Trump is the poster boy. Regan was a showman wanting to lift up. Shit-gibbon is a showman about wanting to tear down.

Searching “Trump versus Reagan” brings up a shitload of articles from all over the political map.
Here’s a Beeb article from the good old days comparing the various GOP candidates to Ray-gun. 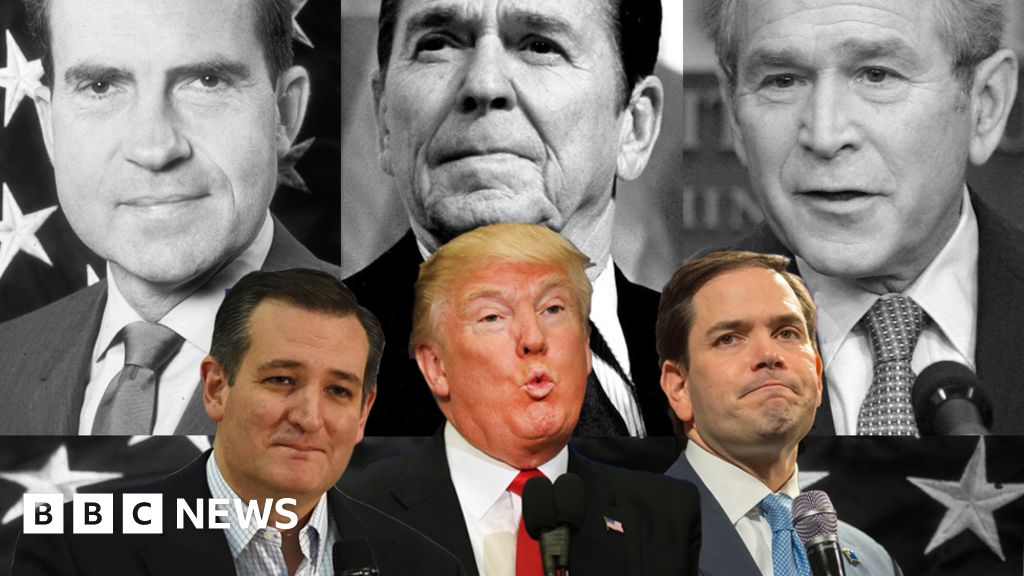 How extreme is Donald Trump?

Where do Donald Trump and his Republican rivals stand on the issues - and how do they fit on an ideological spectrum alongside past American presidents?

Biggest stand-out is the Simpson-Mazzoli Act in '86.

ETA:, well, just one Regan joke. Regan would stuff 45 into the back of a Ford Granada and take him back to the nick, where 45 would have an accident falling down the same flight of stairs several times over.

Eh might as well be the one to do it even though I intended Ronald Reagan.

Guessing not much different than Bush and Bush. They’d abhor him on the inside. But show up when it mattered so as not to make too much of a fuss.

“You mean to tell me I could have just gone straight from B-list celebrity to President of the United States WITHOUT spending years gaining experience in public service first?”

Part of me wonders. Reagan was principled enough to oppose the Briggs Initiative at a time when he was preparing to run for President, and counting on the votes of conservatives who might have supported it. He was wrong about a hell of a lot of things, but he wasn’t incredibly eager to sell his soul to buy a vote. At least, not then.

Love Regan or hate him

Clearly most people here will dislike the man. However there are people see him through rose tinted glasses. Costs me nothing to admit that even though I pretty well feel he negotiated a feel with Iran that would have the hostages released… Only if and when carter was out of office.

I made this thread because using Saint Regan as a frame of discussion with repubs might be a good idea.

Have you read The Authoritarians?

Most Republicans aren’t capable of having their mind changed, except by their chosen authorities, for whom they’ll turn on a dime.

That rug really tied the room together.

This. They don’t give a fuck about Reagan, who is more liberal than any of them. They just need a strong leader, and Bush Jr is still a joke and Bush Sr was too weak, so they default to Reagan.

Reagan liked immigrants, legal or no, because he was a pragmatist. I am sure he’d frown, but say not terribly much at the current climate.

I am on a conservative-leaning forum and posted this, which nobody was able to refute out of hand. Whether it budged their dials a millimeter is impossible to tell:

“When the Labor Department is forced to relent and let these visitors do this work it is of course all legal. But it makes one wonder about the illegal alien fuss. Are great numbers of our unemployed really victims of the illegal alien invasion or are those illegal tourists actually doing work our own people won’t do? One thing is certain in this hungry world; no regulation or law should be allowed if it results in crops rotting in the field for lack of harvesters.” – Nov. 29, 1977, radio address.

“Some months before I declared, I asked for a meeting and crossed the border to meet with the president of Mexico. I did not go with a plan. I went, as I said in my announcement address, to ask him his ideas — how we could make the border something other than a locale for a nine-foot fence.” – December 1979 responding to conservative columnist Holmes Alexander.

“I supported this bill. I believe in the idea of amnesty for those who have put down roots and who have lived here even though sometime back they may have entered illegally.” – Oct. 21, 1984 debate, on an immigration bill being considered in Congress.

“For one, we very much need in any immigration bill — we need protection for people who are in this country and who have not become citizens, for example, that they are protected and legitimized and given permanent residency here. And we want to see some things of that kind added to the immigration bill.” – Sept. 13, 1985, interview with the Spanish International Network.

“We have consistently supported a legalization program which is both generous to the alien and fair to the countless thousands of people throughout the world who seek legally to come to America. The legalization provisions in this act will go far to improve the lives of a class of individuals who now must hide in the shadows, without access to many of the benefits of a free and open society. Very soon many of these men and women will be able to step into the sunlight and, ultimately, if they choose, they may become Americans.” – Nov. 6, 1986, signing statement for Immigration Reform and Control Act.

“I believe we must resolve the problem at our southern border with full regard to the problems and needs of Mexico. I have suggested legalizing the entry of Mexican labor into this country on much the same basis you proposed, although I have not put it into the sense of restoring the bracero program.” – “Reagan: His Life in Letters,” page 511.

Reagan would have no more chance of fitting into the current GOP than Nixon would. Pair of wooly liberals.

Reagan deferred, always, to the extravagantly rich FIRST. Then authoritarians, especially when it got him votes.

Y’know? The only real difference between Reagan and the Rump is that the authoritarians have a closer relationship to wealth now, through the blatant, public glorification of corruption, theft, and general abuse of the poor and lower middle class. Rump still defers, first, to the thieves of his class.