I think my dog Zuul should go as Slimer this Halloween

There is no Slimer, only Zuul. 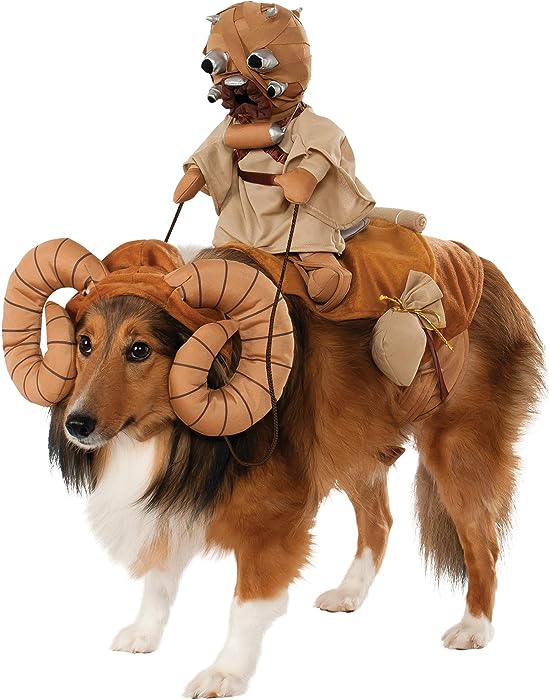 The dog in the Amazon listing has an expression very similar to what mine would be, if asked to appear in an underwear ad.

The tail and the eyes say it all.

Anyone tormenting poor defenseless animals by dressing them up are sick evil bastards. They don’t need a bath either.

The fact that Boing Boing uses affiliate links is well documented in our TOS/Privacy Policy and elsewhere. Your feelings about it are off-topic in just about every thread on this BBS.

He’s just getting into character.

Do Banthas have tails???

My family was thinking about going as the Teen Titans this year but I’m not sure if there’s a safe and humane way to paint our dog green so she can go as Beast Boy.

It’s hard to say whether the pet or the human is degraded more by dressing them up.

What an adorable dog, with a fancy costume on. I also want to dress up both my Labrador Retriever and Pomeranian on Halloween, but it seems like it will be a struggle. I have seen them wear dog boots and it just gave them the hard time to walk around the neighborhood during summer. I will still try it on Copper, maybe it is easier to find a suitable dog clothes for small breed.

I have seen them wear dog boots and it just gave them the hard time to walk around the neighborhood during summer.

Yeah, my old dog didn’t like the winter boots I got him… but he got used to them. (Many houses and businesses on our path for “walkies” used rock salt, and I didn’t want him getting it all over his paws… not to mention all the ice and snow of a Michigan winter. As a shi tzu, he had fur between his pads and getting the snow out of it was difficult.)

I never put Danny in a costume, but he did have a coat. (Actually, two coats. One I crocheted for him for chilly days, and a store-bought coat for real winter.) He was elderly and slowly losing his fur, so he needed something to keep him warm. Again, he wasn’t crazy about it, but he got used to it. (I think he liked the coat better than the boots.)

This is the closest my Danny ever got to a costume:

To cover their bum burrs.

We got a swamp cooler vest for our elderly dog for the summer time in her waning years. It really put a pep in her step, though we’d get a lot of “helpful” assholes yelling at us for putting a “sweater” on a dog on a hot day.

What’s that, Lassie? A young man approaching us in a landspeeder???

Admit that you only posted this to tell us your dog‘s cool name.