If forced to play Monopoly, use this gameplan

If people force me to play Monopoly, then I won’t want to have further dealings anyways. I hate the game, and will avoid playing with all costs.

My son has asked to play this game. I said “fine, but it’s designed to make you hate capitalism, you good with that?”

He hasn’t responded yet. That was months ago. 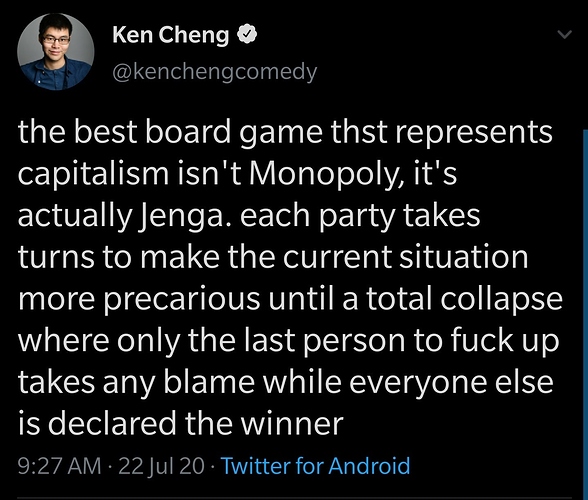 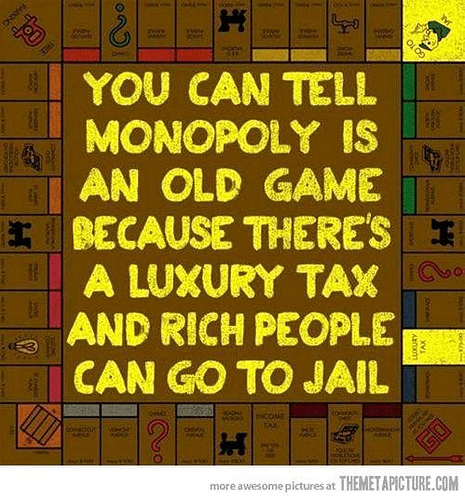 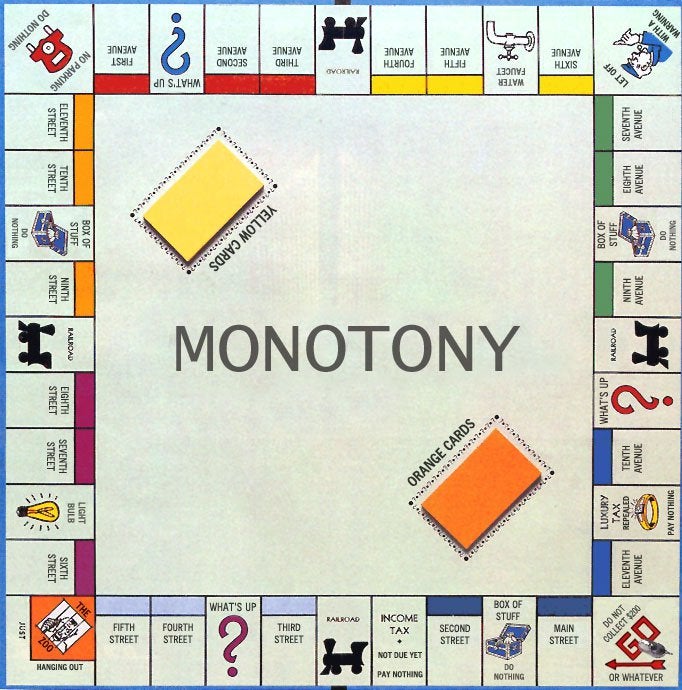 If you wanted to go all in on this lesson you could make “real life Monopoly”, where one player starts off owning half of the board and has $10,000 in their hand. Two other players start with 1 random property and the customary $1,500. All other players start with no property and $50, they also only get $50 for passing GO. If any of those players are eliminated from the game they should be called lazy and told to pull themselves up by their bootstraps. The rich player should spend most of his effort trying to turn the other players against each other, telling them how players #2 and #3 are taking opportunity away from the other players every time they buy something, and asking them to contribute to funds to help those high number players. Also, if player #1 is ever forced to pay because he lands on someone else’s property he gets a bailout from the bank to cover his expenses. If any player objects to anything player #1 does they are called a communist and sent to jail.

Somebody once told me during a game of Monopoly to pull myself up by my own bootstraps, but when I tried I flipped the table over and wound up breaking their nose. Oh well.

I do the same when my kids want to play (They are partial to the World of Warcraft version).

We have a house rule that I have to approve all trades and deals for fairness. I always make sure the deal favors the person who is behind…as it should.

this might be an unpopular opinion, but I’ve come to kindof enjoy monopoly. My kids got a little obsessed with it this year, and I’ll play it with them every couple of weeks. The crucial point to make it playable at all is to ditch all the ‘house rules’ (money on free parking especially, not doing the auctions, etc), since those will just drag the game out until everyone is bored to tears. It’s not catan, but trading can be fun.

It’s still a flawed game, especially in that once someone starts winning (or losing) it’s really hard to catch up, but that was sort of the concept of the original.

I disagree with the strategies here, though, hoarding the houses might help you win, but it’s surely a dick move and the two brown properties are great. It costs nothing to put two hotels on there, which is super satisfying. Railroads are perfectly fine, especially if you have at least two (always great when someone gets that ‘advance to nearest railroad and pay owner double’ card).

That’s what happens to me every time someone serves me Lipton instead of Yorkshire Gold.

The only way to win is to never play at all.

You can always try the UnMonopoly Game. It’s an antique game, I have a near minty version of the board game.

The last time I played one guy was down and out, almost no money maybe a few properties all mortgaged and… he managed to screw us all and win. It was almost a thing of beauty.

Also, my wife and I have taken to playing the card version, it’s a much more freewheeling game with elements of monopoly, rummy and uno all stirred together.

We usually played on rainy days during family holidays.
With a complex set of house rules that ensured nobody really lost.
So, heavily regulated capitalism. Fun!

I played a game of Monopoly one time with a bunch of law school students and an aspiring investment broker. I’d like to think I’m the one who started offering loans and contingent negotiations, but I don’t actually remember now. Anyway, it pretty much played out like “The Big Short”.

To be fair in Monopoly jail isn’t a punishment so much as a slight delay on your way towards becoming unfathomably rich. It’s just a shame you happened to be in the wrong place at the wrong time. You actions were certain justified in your attempt to win.

I love playing Monopoly and have owned a copy or two on multiple platforms.

I think the main strategy is as someone posted above - be ruthless. I very often do this by being a slumlord and focusing on that first strip after GO. They are dirt cheap to get, people generally don’t care about them, but they HURT when you land on them, especially since most people will hit 2 on a given turn. Losing all your GO money plus more puts them into a mortgage-pay-mortgage-pay loop that kills people quick. At least, that is how I play against AI. Against people, I try to be more kind and less ruthless.

I’m firmly in the “if forced to play, you’ve already lost” camp.

Mom remarried when I was 10, and step-dad, who was normally very mild-mannered, played by “THE RULES” while mum and I had always played by “loose, modified house rules”. First game was fine, but subsequent games went downhill. Fast. Pretty sure we stopped playing by the time I was 11.