Originally published at: This is the Monopoly world champion and here are his tips for winning | Boing Boing

Also, jail is your enemy at the beginning of the game, but your best friend towards the end. By then, if you go to jail, stay there for as long as possible because you can collect money off your properties but you don’t go around the board paying other players.

A strange game. The only winning move is not to play.

here are his tips for winning

Have a tolerance for boredom and bad game mechanics. Otherwise everyone except you can go bankrupt and you’ll still lose.

The most interesting thing about the game is its origins. 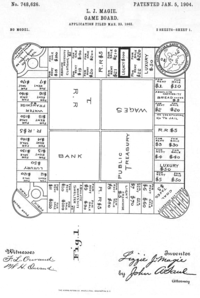 The Landlord's Game is a board game patented in 1904 by Elizabeth Magie as U.S. Patent 748,626. It is a realty and taxation game intended to educate users about Georgism. It is the inspiration for the board game Monopoly. In 1902 to 1903, Magie designed the game and play tested it in Arden, Delaware. The game was created to be a "practical demonstration of the present system of land grabbing with all its usual outcomes and consequences". She based the game on the economic principles of Georgism,...

Play to lose so you can get on with your day. That’s my strategy.

No pile of money in “Free Parking” (where did that even come from in the first place?). Auctions when people land on a space they don’t want to buy??!? Who knew??

Auctions turn it into more than a game of snakes/chutes and ladders.

And “Don’t let your older brother run the bank.” He would always steal thousands when he thought I wasn’t looking. And guess what he does for a living.

I have heard time and again from fans of Monopoly that it’s a completely different game when played by the written rules, and not house-ruled into oblivion. I have yet to test this out, because I have played so many fantastic modern board games, I cannot fathom Monopoly ever competing.

This was a pretty fun documentary on Monopoly from a few years back – and I’m generally a Monopoly detractor.

Under the Boardwalk: The MONOPOLY Story

Under the Boardwalk: The MONOPOLY Story is an Emmy® award-winning documentary about the game of Monopoly, those who play it, and how the game has become a worldwide phenomenon over the last 80 years, narrated by Zachary Levi. Now available on Amazon,...

Those are tips for winning, but I prefer getting entertainment out of my games.

How to get the most enjoyment out of Monopoly:

It shouldn’t be a five-hour game.

Nor even a five-minute game. What kind of masochists would run tournaments for this?

On the plus side, hatred of Monopoly certainly brings us all together…

Nah. I’m a modern board gamer myself, I enjoy rules and instructions, and I have played Monopoly almost entirely by the rules as many times as I could stand it. It doesn’t get any better. (I have to question a game that I can play as a child and come up with the same 3 strategies as a grand champion employs).

Monopoly is best for a mixed crowd, you can have children and grandma at the same table, it’s social, and the non interested have almost as good of a chance at winning as the interested people do. It’s like eating at Applebee’s.

Auctions turn it into more than a game of snakes/chutes and ladders.

I don’t get what your trying to say here.

Snakes/Chutes and Ladders is essentially a deterministic game, assuming the spinner is replaced with a seeded psudo-random number generator. If you wrote a computer version of the game you could just pick a number of players, then almost instantly tell everyone which player won and ask if they want to see the replay of the ‘game’, or run the game with a different seed to get a different winner. There is no real player agency in the game at all.

If anything auctions reduce the determinism of Monopoly. For each roll that lands a player on an unowned property they have to choose to by it or not, if they don’t then every other player needs to decide how valuable the property is to them and if they will bid and how much to bid. The personalities and preferences of the players can change the results dramatically, resulting in something that isn’t at all like a determinism of Snakes/Chutes and Ladders.

I have heard time and again from fans of Monopoly that it’s a completely different game when played by the written rules, and not house-ruled into oblivion. I have yet to test this out, because I have played so many fantastic modern board games, I cannot fathom Monopoly ever competing.

It is very much better, but that is like saying watching an unenjoyably bad 1 hour movie is better than watching an equally bad 4 hour movie. It’s clearly a true statement, but why would you do that when there are good movies to watch?

Ah, the issues of text-only. I prefer auctions because they stop the game being chutes and ladders, same as you’re arguing

I have heard time and again from fans of Monopoly that it’s a completely different game when played by the written rules, and not house-ruled into oblivion.

Not the only game. We used to play with house rules that ruined the game of Risk*, although we were too young to realize it.

*We played that the defender got to choose whether to roll one or two dice after the attacker roll. Which tipped the odds enough that the game favored the defender. And we didn’t regard the counter set as limiting which resulted in Stunningly huge forces on choke points like the Ukraine or Kamchatka. Nobody ever won. The games invariably lasted until my friends little brother flipped over the board in frustration or dinnertime, when we had to clear the table.