The shortest game of Monopoly

Originally published at: The shortest game of Monopoly | Boing Boing

I still prefer not playing Monopoly at all.

There was a Reddit thread recently on dealbreakers for dating. I think one of mine would be if you said your favorite board game was Monopoly. “Check please!”

The most popular games in America are also why most Americans don’t play games as much as in Europe. Candyland, Chutes (or Snakes) and Ladders, Monopoly, Uno (yeah, Uno sux) et al. They have awful mechanics that are completely divorced from any possibility of strategy or reward for taking risks, gameplay can be infinite to the point of disengagement or “last man standing” scenarios (how many times do you call Uno just to gain a full hand on the next round?). Nearly everyone’s first gaming encounter is one of these dreary slogs so there’s no introduction to the real joys of gaming.

But I’m grateful for them, because when Young Ms Peas showed an interest in gaming, I saw firsthand how discouraging they are, which forced me to find Board Game Geek, which turned us on to the greatest game ever:

I know there are more complex and rewarding games, but for a game that everyone can play within minutes of opening the box (pick up a tile-> match tile edges-> place a meeple or don’t-> next player), Carcassonne has no peer. The Young Peas won their first games at the age of five (taking out farmers makes it essentially all-ages) and we’ve gifted it probably a half a dozen times. The expansions are awesome and use the same mechanics, but introduce really great twists on gameplay.

Our dream is to one day take our well-loved copy to France and play in the real Carcassonne. Fortunately, family lives just a few miles away!

Carcassonne has no peer

I wanted to alert you that I just laid a meeple in a field just a few tiles away from yours and am anxious for the merger.

I remember hearing a podcast a few years ago where some tournament Monopoly players were interviewed and said the only reason Monopoly takes so long and seems so un-strategic is that people generally ignore one of the rules. I think it was something about auctioning off or trading properties, which I certainly have never done in Monopoly. But as I recall, they said that no game of Monopoly should ever take more than an hour or so, and that 20 minutes was pretty typical for a tournament. (That was the gist anyway, the numbers are probably only accurate to about +/-100%.)

I haven’t played Monopoly myself since hearing that podcast, but I do remember thinking that I would have had a more interesting childhood if I had just read the damn rules…

Carcassonne is a great game for (almost) all ages. I once played with my (then) 4 year old and a bunch of adults. Kiddo was happy that they could just match tiles, while we all could play an actual game. And when Kiddo got bored, he toddled off somewhere, missed a few turns, and came back later. Lots of fun.

Yeah, kids can lay tiles any way they want, make designs, lay people and still score points. Just a little encouragement helps them remain competitive; “remember, you can put a monk in the cloister!” Adults can deploy long-term strategy, alliances, deals and outright theft (I’ve got my eye on you, @MrWoods!) and it plays just as easily. Unless someone is just really slow at lying down tiles, it’s over in 30-45 mins. 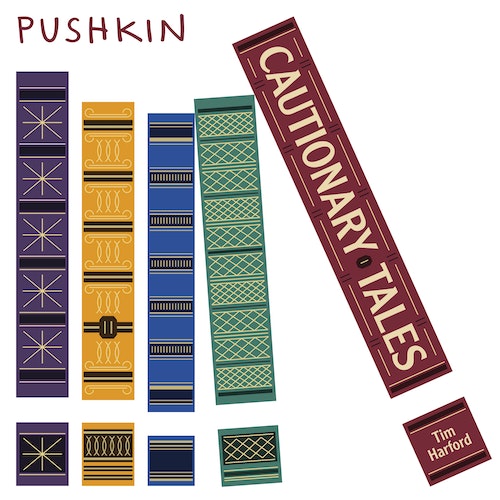 Do NOT Pass GO! by Cautionary Tales with Tim Harford

The woman who was key to the creation of Monopoly was denied of her share of the credit and the profits.

Monopoly only takes so long because people don’t auction off everything and they play with ridiculous house rules that increase money in the game. The whole point of Monopoly is that money is constantly being removed from the game, oftentimes at a faster rate than it comes in. It drives every player to eventually bankruptcy, with one player surviving just a little bit longer.

I’m not a fan because of the luck based aspects in dice rolling, but monopoly played right ends quick and brutally.

I once played and endless game of Monopoly. My wife and I played and yes, we were not being completely hard on each other. We basically went around the board and purchased properties as we went. No one really had too many punishments, so properties were being purchased left and right. At one point I owned two complete sides of the board, with her owning the opposite two sides. I mean every space and utility.

At that point we simply traversed the board, earing money as she passed through my area and losing money going through hers. As long as no one landed on a high stakes property like Boardwalk, the game would never end. It was crazy to say the least…

So, it mimics real life. The first person there buys up the good stuff and drains the bank account of everyone else and that is all determined by a roll of the dice.

People ask me whether I feel any moral qualms about the source of the points, but if he hadn't introduced factory farming to Agricola, someone else would have.

Everyone knows that if you land on Income Tax on your first roll, you pay 10% of your total worth, which is only $150 right at the start of the game get into a heated argument about how the game is actually supposed to be played and then walk away to do something more interesting, i.e. anything else.

I think the official rule is that if a player lands on a property and chooses not to buy it, it gets auctioned off. Therefore, all properties are owned by somebody after they’re first landed on.

Another reason home Monopoly games take forever is the house rule that all Chance and Community Chest fines go in the middle of the board and get claimed by the next player to land on Free Parking. That prolongs the death spiral of losing players.

This scenario is really contrived, relying as it does on people not being interested in buying any property except Boardwalk and Park Place. I wonder what the shortest possible Monopoly game that might actually get played would take.

Check the comments to the original article, it contains some alternative solutions that avoid the possibility of auctions.