In West Virginia, there's a town where Wi-Fi and cellphone service is illegal. "Electrosensitives" love it

Has anyone done proper double-blind tests to verify electrosensitives’ claims? All I’ve seen to date is “yes we can” vs. “no you can’t”.

They have a point about the fluorescent lights. But not a sufficient point, since the NRAO people would have done away with fluorescent lights decades ago if they were an actual problem with the radio astronomy.

I suspect that the modern gasoline-powered automobile isn’t really a problem either, since the automakers spend a lot more effort these days making cars compatible with sensitive radio receivers.

[quote=“xeni, post:1, topic:49307”]Teens in Green Bank have “found a work-around,” and are creating rogue WiFi networks that allow them to text-message and use social media services like Facebook and Snapchat.[/quote]Suddenly I envision mischievous children running around shaking magnets inside coils of wire.

Yes, there have been several tests. There is no evidence that they can detect anything. http://www.ncbi.nlm.nih.gov/pubmed/15784787

From the wikipedia article on Electromagnetic Hypersensitivity:

Suddenly I envision mischievous children running around shaking magnets inside coils of wire.

Well… half them are spending a considerable amount of time making that motion. May as well put it to use.

But doesn’t the mere presence of AC power generate RF?

This reminds me of when my dad’s-wife’s-son used to be married to this woman who claimed that raspberry gave her splitting migraines and we all knew better. Once I shared a desert with her on vacation that she claimed was great, and mentioned to her three hours later that it had a raspberry gel in it. She didn’t get the headache until then… so from then on we pretty much ignored her claims.

I’m sort of on that same side of the fence regarding the “electrosensitives.”

It should be pretty easy to track down these Rogue Teens and their wacky adhoc wifi networks. Surely at least one of the electrosensitives can play hot/cold.

Since we’re sharing ES stories, there was the lady who was convinced a new cell tower was responsible for a wide litany of her health woes… except it wasn’t on, they’d just built the structure.

Is it too late for me to patent a line of attire that protects electro-sensitives?

The headgear would be based on this design:

But doesn’t the mere presence of AC power generate RF?

Yes, but at 60 Hz the frequency is so low that it doesn’t matter for much of anything (likely including radio telescopes). The power line broadband stuff that used to be used to provide Internet in some rural areas is the real offender – that stuff would spew garbage all over the HF spectrum, up to the tens of Mhz.

The headgear would be based on this design:

Thank you. Now I want some Hershey’s Kisses.
[drools]

But I suppose this hobby project is right out:

But wouldn’t the tricorn sell better? 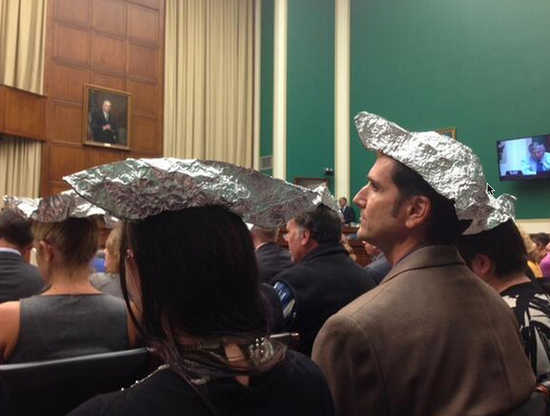 As an amateur radio operator, I can confirm that I can detect when a car drives past my (fairly rural)
location just from the noise on the lower radio bands, basically everything under 10MHz. Theres a reason why the International Telecommunications Union decided to ban spark-gap transmitters as soon as better technology became available.

I’ll concur on the other comment further down about ethernet-over-powerline being absolutely horrible for radio noise, makes doing anything radio related in the vicinity completely impossible. As well as poorly designed chinese junk electronics. That FCC declaration of compliance is there for a good reason.

Oh, I need one of those for the next local street fair! The Teabaggers always have a booth and they are in serious need of mocking.

Yeah, but Wikipedians are known shills for big electron.

Yes, but at 60 Hz the frequency is so low that it doesn’t matter for much of anything

We-ell, with a perfect wire. But in an imperfect world there are harmonics. And in a finite one they’re not all integer multiples. But the attenuation is pretty rapid so, on the whole, yeah.