I’m not sure if they mix wifi with the delicate-and-crazy-high-energy experiments; but they did run into a rather brutal wiring problem… I suspect that some grad students will never be the same again after dealing with that mess.

Until my ‘smart kettle’ can walk itself over to the sink, fill itself up (to the proper amount for my two-cups-at-a-time tea habit) then walk itself back to the tea making area, switch itself on, boil, switch itself off, then it needs to grab the 2 cups jelly chat glass I use for tea (careful they are heavy and slippery, no stinking handles) grab a single serving of PG Tips, insert into glass, pour to 80% full, brew to the color of mahogany, remove tea bag and if it could saunter over to the smart fridge and dispense some smart milk to the proper amount… well THEN we can consider the teapot ‘smart’. Only then.

This monstrosity is a joke. And probably has a rootkit reporting your boiling habits to certain .ru servers. Or maybe it is just listening all the time for credit card numbers being spoken aloud.

Just because you can automate something doesn’t mean you should. I mean, I’m a coder, and I’ve happily spent two hours automating a task that I’ll do at most once in my life and which takes ten minutes but I know I’m being daft.

I remember when having a home computer was weird and when getting it to do anything useful was an afternoon’s toil. I remember when the phrase “I’m going to install Linux on that machine” was followed by “if I don’t phone back in a week, send help. Also pizza.” Now, everyone has a working Unix workstation in their pocket and installing Linux on a machine consists of halfheartedly throwing an Ubuntu DVD at your machine and walking away to make a cup of tea (not with a cyberkettle either).

Presumably one day the use of IoT gubbins will be as painless and trivial? I’d harrumph with the best of them, but I can’t help but remember a certain article in Newsweek.

Whenever I ask “Why a smart $thing?” The answer is “it saves you time.” Yeah. Even if it always worked perfectly, the amounts of time saved each day add up to mere seconds. People say, “Yeah, but it adds up.” No, no it doesn’t. That’s not how time works. Even if it did, it certainly doesn’t add up to 11 hours.

Unless the kettle fills itself each time, I can’t work out what is the point of a smart kettle.

If it could turn off by itself, I suppose that would be a nice feature, but that’s something any EE worth his/her multimeter could whip up by themselves.

That’s something every electric kettle does out of the box.

The replicator should be able to remember his personal preferences so he could simply say “tea.” Obviously it remembers exactly what temperature he means by “hot.” If he had guests or an unusual mood he could go into more specifics then.

The replicator should be able to remember his personal preferences so he could simply say “tea.” Obviously it remembers exactly what temperature he means by “hot.” If he had guests or an unusual mood he could go into more specifics then.

Conversely, we probably wouldn’t be having a conversation about what kind of Tea a fictional caption liked on a show from almost thirty years ago if all he ever said was “tea”.

In other words, an extremely competent system like you describe probably wouldn’t play very well on television without a lot of exposition to set it up. Also, our expectations for what computers can and should be able to do have changed since 1987.

To me, this always seemed like he was progressing down a sort of interactive script (like we deal with on the phone these days) and just skipping all the prompts. “What would you like?” “Tea.” “What kind of tea?” “Earl Grey.” “Iced or hot?” “Hot.” “How much sug…” “JUST GIVE ME THE DAMN TEA. I’LL GO STRAIGHT TO GUYNAN NEXT TIME.”

That’s something every electric kettle does out of the box.

Ooh, fancy. I’ve never used one. If this is something people already use, then what’s the point of a “smart” kettle?

A kettle has four functions:

The only thing I could think of is a way to smartly brew the tea, but a kettle doesn’t brew tea. Besides, there are products out there that already do that without calling themselves “smart”.

OMG, they’re great. You fill it with water, flip the switch and then make breakfast or deal with the kids or whatever and then return to the kitchen and the water is hot. No whistling, no flames, electric kettles are the greatest.

I still cannot figure out why you’d want to remotely make one operate though. At the most I might want one on a timer, but that’s as simple as getting a timer and spending two minutes setting it before plugging it in. The simple fact that you need to fill it with water the night before means that you’re not actually saving any real tea-making labor or time, I don’t stare at the thing while waiting for it to boil, I just do it first and then fill that time doing other morning tasks.

Automation can help out. In this case it seems like it’s only a hindrance. 11 hours. Christ, that’s like six movies you could have watched instead and still been as useful.

smart kettle, trying to get it to heat water for a cup of tea

User Error!
Kettles are for fish!

I have that same one, at least it looks the same. I would also recommend, very much so.

My kettle has no brains beyond “reached a boil, now turn off” or “removed from base, now turn off” which I also recommend. I am probably behind the times, but I’m willing to live in the dark ages of dumb kettles.

I’m not sure why an IoT kettle is in any way better than a Teasmade. Does anyone still use those? A teasmade is a machine for making tea automatically. It was once common in the United Kingdom and some of its former colonies. Teasmades generally include an analogue alarm clock and are designed to be used at the bedside, to ensure tea is ready first thing in the morning. Although crude versions existed in Victorian times, they only became practical with the availability of electric versions in the 1930s. They reached their peak in popularity in the 1960s and 1970s, since which time their use h...

I still cannot figure out why you’d want to remotely make one operate though. At the most I might want one on a timer, but that’s as simple as getting a timer and spending two minutes setting it before plugging it in.

Maybe to have the water boiled the moment you walk in the door, if you have a job where you don’t know exactly what time you’ll be home on a given day?

But yeah, other than that very specific scenario, I can’t think of any reason. Or why you’d need tea within seconds of coming in your front door, instead of waiting the five minutes you’d need to boil the kettle.

I’m told they’re ubiquitous in Old Blighty. Definitely gaining in popularity here in the colonies over the past decade or two. Maybe recently improved technology enabled rapid boiling on 120V? The basic models have an internal doodad that’s pushed up by the pressure of the steam in the kettle, which turns off the switch. Fancy ones have an electronic sensor so you can heat to the appropriate temperature for your type of tea.

Oh and the kettle itself is usually cordless, powered through a corded base that it sits on.

The turning-itself-off is the main thing though. With a stovetop kettle, you put it on and go about your business and it starts shrieking while you’re upstairs or in the bathroom or something and it takes you a while to pull up your pants and get to it but now it’s woken the baby so first you have to go soothe her and by then the water’s all boiled off and the kitchen is on fire.

The Japanese — or restaurants, I should say, I don’t know if they use them in the home — seem to like this type: 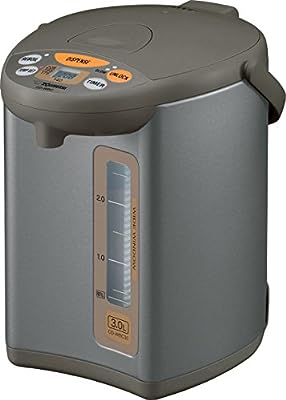 I guess it’s safer, since there’s no risk of dropping the kettle? Not really sure what other advantages a dispenser offers. I’m sure there are models that hook right up to the plumbing so you never need to worry about refilling them.

EDIT: Seems they can hold the water at temperature, so you don’t need to wait another three minutes for your second cup.

As much as I’d go for that, I’d feel funny drinking from a leaky skull. (No offense to Chip.)

Fancy ones have an electronic sensor so you can heat to the appropriate temperature for your type of tea.

This is the one I was thinking of. A heating element, temperature sensor, circuitry for linearizing the sensor output, data acquisition, microcontroller, and there you go. Not terribly complicated to make. Sounds like a good Arduino project.

A leaky skull filled with the contents of another skull, mixed into teapot snot.