What kind of wifi gear has a user-visible ‘recalibration’ procedure at this point in history?

Yes, NICs do perform all sorts of witchcraft in the background; and people tinkering with the firmware on Aetheros-based devices are familiar with the need to preserve the ART partition lest the factory calibration data be lost; but user-visible? That’s just a barbaric atavism. 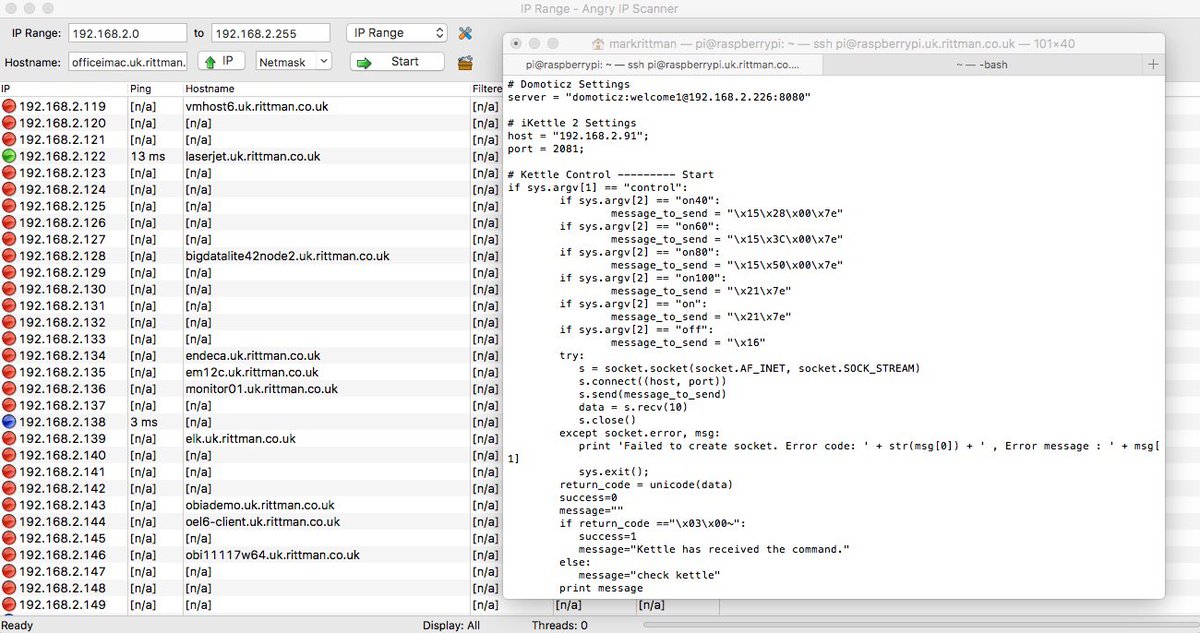 this reminds me of this bash.org quote

<erno> hm. I've lost a machine.. literally _lost_. it responds to ping, it works completely, I just can't figure out where in my apartment it is.

Less like Picard’s “Tea, Earl Grey, Hot,” and more like Arthur Dent’s struggles with the Heart of Gold.

We should ask if the beverage that was produced in the end was something that tasted almost, but not quite, entirely unlike tea.

This is why I don’t drink tea. Good luck getting your 11 hours of life back.

Welcome to the future.

If you look at the last picture in the Guardian article, the one with the bananas on the left (just look at them), you can see his stainless steel French Press pot on the right. In fact, it looks like he has two, of different sizes. I have the exact same one, and can heartily recommend: unlike the Bodum versions, this one is double screened (never ANY loose grounds getting past and into your mug) and when you screw the plunger to the screen base, it stays screwed in place instead of loosening all the time. Easy to clean,either in the sink or dishwasher. Rugged. Clean lines. Just, a well made press pot that lasts for years without any problems at all.

A note to commenters, please try to come up with something more original than, “Why bother with a smart kettle?” The obvious answer is “Tea, Earl Grey, hot.”

If this is the future, I am joining the luddites. I would rather die of thirst than spend 1 hour, let alone 11, debugging an electric kettle.

Has he tried beer? Much simpler.

"A note to commenters, please try to come up with something more original than, “Why bother with a smart kettle?”

It may be unoriginal, but it’s a perfectly valid question. WTF is the point of a “smart” kettle? Is someone’s life really so hectic (or devoid of meaning) that he/she truly needs such toys?

Earl Grey is never the answer. Unless the question is “Who’s that guy on the pillar at the top of Grey St in Newcastle?”

I am reminded, not so much of Hitchhiker’s Guide, as I am of PKD’s Ubik.

Earl Grey is never the answer.

wondering if the super hedron collider guys would have this trouble

Earl Grey is never the answer. Unless the question is “Who’s that guy on the pillar at the top of Grey St in Newcastle?”

Or “Who donated the championship trophy for Canadian football?”

What’s so “smart” about this Smart Kettle? Does putting it on the IoT and slapping a voice control on it somehow make it “smart”, or does it have some other feature that makes it superior to a standard tea kettle? You know, the kind you fill with water, turn on, turn off, and get water out of? Those are the only real functions needed in a kettle. If it could turn off by itself, I suppose that would be a nice feature, but that’s something any EE worth his/her multimeter could whip up by themselves.

That one is a classic. And also why decent servers have a software-triggerable LED of some sort so that when the person at the LOM console sees a problem, the poor fellow sent into the racks to go find it actually has a hope.

(in that vein, how much do you think it would cost to add a small E-ink display, just large enough to display a hostname(or, if it turns out that the cost isn’t significantly greater, room for a human-readable hostname and a QR code for machine-readable inventory details, to the chassis of a computer so that you could update its label in software; but still have it visible when the machine is off? You couldn’t really justify the per-unit cost across an entire fleet if it were too expensive; but it’d be way, way, more convenient than dealing with the label maker or booting a machine just to see what its name is.)