For a whole 2.17, I wouldn’t rule out any exciting manufacturing defects; but in theory a properly sealed composite heating element like that should be electrically safe. Now, waving around an unshrouded 800w power resistor before you’ve had your first cup of coffee; that’s just asking for trouble.

When I was in college everyone had either an immersion heater or a coil element stove in their dorm room, both strictly forbidden. Funny that there was no prohibition on soldering irons, which are very much like immersion heaters except you don’t tend to have them in water while plugged in so probably more of a fire hazard.

Last time there was a thread here on kettles I mentioned my excellent 1500 watt Braun WK200, which is apparently no longer manufactured thanks to corporate cannibalism. (However, when I looked for it I found an attempt at a cheap clone, this Gourmia GK200 [note the model number], which has the same specs though looks cheesier.) Even at 1500 watts mine is slower than the kettles I had when I lived in in the UK and Norway; I’m not sure I could live with a 1000 watt kettle. At my age every minute is too precious to spend waiting for the water to boil.

That’s an astonishingly old fashioned heating element. I haven’t seen one like that for years. All those I have bought in recent years have concealed absolutely flat elements which make it possible to boil really quite small quantities of water.

Perfect size for boiling enough for one mug of tea.

Rob, you fool, that’s exactly how they kill you. Subterfuge.

I’ve spent three months with it. It’s OK.
Here’s a photo of the heating element after a thousand or so boils

Why do you need to boil water 11 times a day? Is there a public health advisory in your area?

I like this new frugal product review direction, keep it up!

3000 watts is normal for a kettle in the UK. So we can get our tea quickly.
In the US I couldn’t be bothered waiting for an electric kettle so I usually used a gas stove top one.

I make and drink tea constantly. 4-5 cups black and about as many herbal.

In the UK one of these is about as cheap as you could ask for (£5), for a kettle with all the necessary features and some good reviews. I’ve just acquired one and so far all ok.

Find the latest fashion for the whole family, great quality furniture & accessories for the home and a wide range of essentials for kids & baby with George, exclusively at Asda.

I make and drink tea constantly. 4-5 cups black and about as many herbal.

(Insert your own sarcastic comment about the things this tidbit of info may possibly explain. Also, for different values of “herbal”.)

bigclivedotcom has a lot of fun analyzing death appliances.

I’m currently living without a kettle, since mine died. Making do boiling water in a saucepan on the stove. It makes having a cuppa a pain in the arse. Also making do without a washing machine since it died in October last year. Spending 90 per cent of your income on rent is fun.

Are these things still made in Dongguan by Chinese girls earning less than $5 a day? I hear rumors that those prostituting themselves to the foremen get better barracks, but I don’t think they get paid more.

I like this new frugal product review direction, keep it up!

Me too! I’m actively seeking them out, now that I know it seems to be a thing.

What more could we want?

Can you work out a trade with a neighbor? Something you’re good at/have the tools for, in exchange for X number of loads a week…that sort of thing? 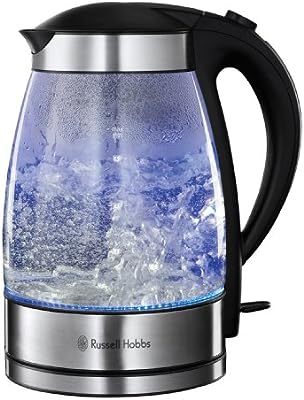 We snagged a re-branded Capresso H20 a few years back. It’s a glass kettle with a base. It will boil 48 oz in about 5-6 minutes. They retail for about $60 but we found ours for about $20.