Interview with photographer of extreme street fashion in Tokyo

The girl/women in the picture does not look very japanese too me. Is there a similar trend to South Korea where a large percentage of young women undergo cosmetic eye surgery?

Bought it, thanks for the tip. Looks great. One of the things I love about this sort of street fashion is, it would totally blend into a comic book like Transmetropolitan, or other things in that vein. Which as far as I’m concerned, means WE HAVE ARRIVED!

I’m happy to say that I went to the launch party for the book in NYC, where a few of the book models showed up! I got my copy signed at the amazing event. Seeing the pictures in larger-than-life format was a special treat; the amount of detail in the prints is stunning.

Go get this while you can–this strikes me as one of those amazing books that will only have one full-sized run, and if you don’t get it now you will be kicking yourself.

Some girls do get cosmetic eye surgery, probably to the same extent that American girls get nose jobs. South Korean girls get way more plastic surgery, for a number of reasons:

To wildly generalize and stereotype, Japanese put themselves in one of three “looks”: Asian (Mongol), Polynesian, or Native. It all comes down to cheekbones and nose size. To me, all the girls pictured are typical Japanese girls. NOTE: you may be getting fooled by the eye makeup, which is specifically crafted to give the girls ‘manga eyes’.

Neat! A book about near fanatic attention seeking behavior.

She looks Japanese to me, just she’s dressed up like a Japanese doll or manga character. She’s wearing a LOT of makeup/costume.

For comparison if I wanted to pull this look off (um… 15 years ago when it wouldn’t be terrifying) I’d actually have to have my nose whittled down.

She looks Japanese to me, just she’s dressed up like a Japanese doll or manga character. She’s wearing a LOT of makeup/costume.

Yea, it’s the makeup. Personally, I was going to comment she doesn’t look all that extreme to me. By Tokyo standards, she’s bourgeois. Like the WalMart version of decora.

I wish Wink were a podcast. I’d love to listen to interviews like this on my way to work, as often as possible.

You may also be interested in a magazine called Fruits. It’s pretty much the go-to source for Japanese street alt-fashion.

Phaidon’s released at least one compilation of shots from it.

NOTE: you may be getting fooled by the eye makeup, which is specifically crafted to give the girls ‘manga eyes’.

She is also wearing oversized color contacts, which is typical for the manga eye look.

Warning: this involves eye poking and it makes me nauseous

To wildly generalize and stereotype, Japanese put themselves in one of three “looks”: Asian (Mongol), Polynesian, or Native.

I lived in Japan for a few years, and I have never heard of this before (I never asked about it, but it definitely never came up). Do you have any substantiation of this? And what the heck is “Native”? Ainu? Can you give examples of each type?

South Korean girls get way more plastic surgery, for a number of reasons:

Cosmetic surgery is not covered by Koran national health insurance. It’s debatable whether Koreans are more homogenous in appearance, but at any rate this homogeneity wouldn’t explain why double-eyelid surgery is so popular there given that it’s definitely not a common trait.

This is nothing new there is a whole series of books called “fruits” that’s been around for at least ten years and consists only of pictures of people off the streets of Tokyo. Also the Japanese publisher expand the line to European country local and their “dress codes.”

Here is the link to one of the book published here in 2001. 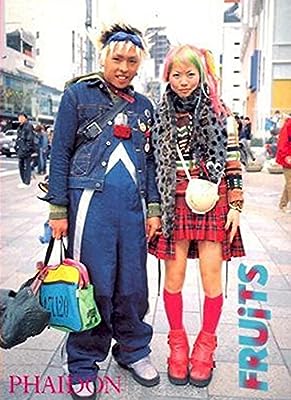 This is a collection of 45 Tokyo street fashion portraits from Japan's premier fanzine. Fruits was established in 1994, by photographer Shoich Aoki, initially as a project to document the growing expl ...


But the extreme DIY fashion culture in central Toyko has been going on for decades and have been documented by local photographers. So yes it’s nothing new.
NickyG March 15, 2014, 3:37pm #18

yeah ive definitely seen a number of other japanese street culture photography books. and frankly it’s a subject that deserves many books IMHO

What, in cyberpunk dystopia? Sadly, aye…