Is your Eierschalensollbruchstellenverursacher as nifty as this one?

Asking how my Eierschalensollbruchstellenverursacher is doing is just rude! I don’t even know you!

It’s interesting how a little German here and there can hint at your CSS.

Oh god. I’m still working on learning German pronunciation. This just made a part of my brain curl up and hide in a little corner.

I think it’s Klingon or something.

Just break it down into chunks and work on each chunk.

I use it while listening to Einekleinenachtmusik1 in Eyjafjallajökull.

Every other time until the 500th time, at which point it explodes.

Apparently, according to my fiancee, I have a pronounced and vaguely Russian accent when speaking German. I think it is from Yiddish cross-contamination.

Probably. I can understand Yiddish, but it sounds like idiosyncratic and accented German to me. The accent and some of the words sound sort of Eastern European to me. Yiddish has zh and hard j sounds that don’t exist at all in German, and Yiddish doesn’t have anything even close to ö and ü. But to be fair, American English doesn’t have a ü sound, and no English has ö.

I use egg scissors at 1/4 the price of this. Faster, too, though they sometimes leave bits of shell still attached to the edge. 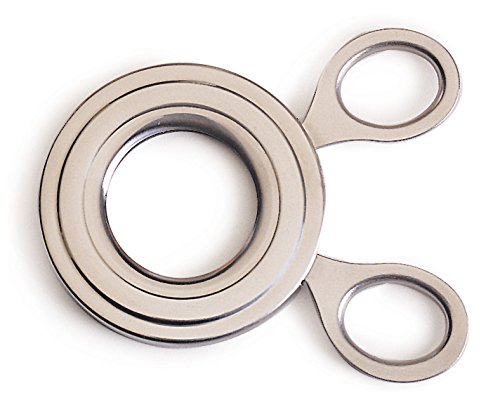 RSVP strives to offer quality kitchen products and cooking tools at competitive prices. Our Endurance Egg Topper is a perfect example. Gently squeeze the handle and a ring of teeth will pierce, crack ...

Intriguing gadget. But what intrigued me more was the whisky decanter next to the kettle and egg preparation area - clearly breakfast in that household is a proper kick start to the day…

Too twee for me.

Funny you should say that. In my experience, most people who learned German as a second language sound a bit russian, or, at worst, hitleresque to me. It’s probably because they try to pronounce it very correctly, rolling every “r” and stuff, which noone actually does (except russians and weirdos on the german north coast). Especially the farther south you go, the more people tend to swallow letters and mush the words a bit together.

For what it’s worth, I have to try really hard to say Eierschalensollbruchstellenverursacher out loud. Basically a tongue-twister. As a kid I loved “Blaukraut bleibt Blaukraut und Brautkleid bleibt Brautkleid”, I could never do that more than five times in a row or so.

just don’t ask me why