It Is Now Three Minutes to Midnight. Nice Work Humans

The Bulletin of the Atomic Scientist has moved the Doomsday Clock closer to midnight.

They cited the climate change as a primary reason, followed by a failure to reduce nuclear arsenals.

Finally, time to immanentize the eschaton.

I don’t know why your comment reminds me of this, but one verse from the Qur’an that sticks in my mind when I think of nuclear weapons refers to the end of the world and goes, “When the sky cracks…”

I have this fantasy that after/if I get my doctorate, I’ll write a comprehensive history of nuclear weapons and that what I’ll title it.

On the plus side, we could think of the Doomsday event as “The release of Fallout 4”. That would be much more fun.

What does that actually mean?

I have this fantasy that after/if I get my doctorate, I’ll write a comprehensive history of nuclear weapons and that what I’ll title it.

The Doomsday Clock is a symbol which represents the likelihood of a man-made global catastrophe. Maintained since 1947 by the members of the Bulletin of the Atomic Scientists' Science and Security Board, the clock represents an analogy for the threat of global nuclear war. Since 2007, it has also reflected climate change and new developments in the life sciences and technology that could inflict irrevocable harm to humanity. The clock represents the hypothetical global catastrophe as "midnight" a...

has a history of the movements.

1953 2 23:58 +1 The United States and the Soviet Union test thermonuclear devices within nine months of one another. (This is the clock’s closest approach to midnight since its inception.)

Something about a heavenly state of existence – like those who ascend during the rapture (or for those of us left behind without all those insufferable xtians).

But it was it first said in an ironic sense?

I’ll write a comprehensive history of nuclear weapons and that what I’ll title it.

How about “The Radiance of a Thousand Suns?”

I have/had this book somewhere… 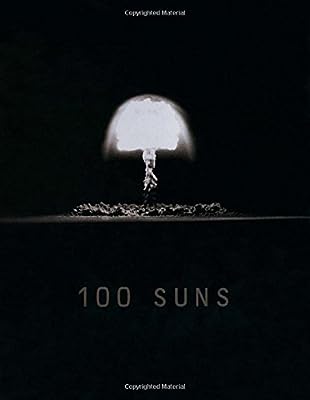 Of course there is a Wiki page: Immanentize the eschaton - Wikipedia, the free encyclopedia
Nope, serious stuff:

In political theory and theology, to immanentize the eschaton means trying to bring about the eschaton (the final, heaven-like stage of history) in the immanent world. Modern usage of the phrase started with Eric Voegelin in The New Science of Politics in 1952. Conservative spokesman William F. Buckley popularized Voegelin's phrase as "Don't immanentize the eschaton!" Buckley's version became a political slogan of Young Americans for Freedom during the 1950s and 1960s.[1]

Voegelin identified a number of similarities between ancient Gnosticism and the beliefs held by a number of modernist political theories, particularly Communism and Nazism. He identified the root of the Gnostic impulse as social alienation, that is, a sense of disconnection from society and a belief that this lack of concord with society is the result of the inherent disorder, or even evil, of the world. He described this alienation as having two effects:

Assuming it remains a manageable size (and assuming it gets written), I think everyone in the Amazing BoingBoing Book Club would get a copy.

It’s a heavily explored area book-wise. I have a lot of them (though not that one) but my conceit is that it’s never been described the way I would like to describe it. I think that a lot of histories have focused too narrowly on the technology alone, or the politics alone, and I think there was a lot more happening at the nexus than has been described.

I actually was thinking about early testamental biblical history and what is described as apocalyptic eschatology. That’s the context my brain goes to when the word “eschaton” is used.

Thank you Big oil, and offshore employement; especially to factories in which the nations they’re in have little to no pollution regulations.

I found by heaven on earth…

seriously one of the better blogs for the last many many years.

Thank you Big oil, and offshore employement; especially to factories in which the nations they’re in have little to no pollution regulations.

I agree. I was surprised to see them manually closed. On the other hand, DocMelonhead clearly believes that “SJW” is a slur (calling them mentally ill liars), and wants to advocate for that definition in every thread. To me, making the same point across multiple threads in the same hour is, at best, spammy, and at worst, a deliberate attempt to rile the community up. Which is why I pointed out the crossposting. I didn’t summon the mods nor ask for intervention, but this is their house and th…