It's not AI until a robot can take an acid trip

Just run all of its inputs through deep dream.

LSD only works on ‘wetware’. AI would need some sort of scrambler/disruptor program to achieve the same effect, which I imagine wouldn’t be all that hard.

But is it the “same” effect? The effect of an acid trip isn’t the hallucination, but what the person feels about what they are experiencing, the reaction to the kind of physical and emotional dislocation that occurs in response to the altered perception is the “trip”. If a robot perceives something that isn’t real, but it doesn’t care, did it really trip?

Do Androids Dream of Electric Sheep?

But is it the “same” effect?

How can I tell if and what you think? Probably not a solvable problem, most likely both for human/human and human/machine interaction.

Um, my input seems to be low on data.

What makes you think the AI won’t care? If it’s an AI and experiences the dislocation and synaesthesia in altered perception, then it should have a similar experience to a human response and should care enough to try and make sense of, and learn from. The emotional response is just another facet of the psychological response, which, if it’s an advanced enough AI, should have.
Of course, we’re nowhere close to AI yet, so it’s all academic.

Actually the true test of an AI would be if browses endless pictures of puppies on the internet to avoid doing work.

should care enough to try and make sense of, and learn from

The concept of “caring” is so incredibly hazy, but that actually is a really interesting way of describing what it means to care. One that even a marriage counselor would appreciate and agree with, I think. It’s a bind-man-feeling-the-elephant style definition, but that’s how all of the squishy human concepts end up being described. I guess that’s one of the essential purposes of AI development, though, to force the development of unambiguous definitions for human behaviors.

Can we build a robot that trips on acid?

And this is how Spider Jerusalem got his iconic two color glasses. His replicator was high on self made drugs.

Comparison to Gödel, Escher, Bach: ✓
Leibniz and LSD in the same sentence: ✓
Recommended by Cory: ✓

Well, my all criteria have been met; it appears that I will be buying this book!

Plus I couldn’t get the fucking thing to work, I was drunk at the time. [disclosure]

Well, you do keep posting kick ass gifs! See it as deep respect for your giffing abilities!

All you’re doing is posting them like you would here, and then adding a tag. Consider it a community resource. Like those give a penny-take a penny thingies you see at gas stations.

Ahhhhhhh, the old tag at the end’o thingy!

What’s the “tag” at the end, exactly?

Different weightings in the neural nets.
Altered importance and reactions.

And an AI is of course not going to think in a human way. I hope not anyway. Don’t hinder it with our fish, lizard, rat, monkey brain baggage. It’s hallucinations won’t be the same as ours.

“Hinder”? I’ll have you know that my “fish, lizard, rat, monkey brain baggage.” is getting me a nice salary per year.

No. They dream of an infinitude of staring eyes… and dogs. 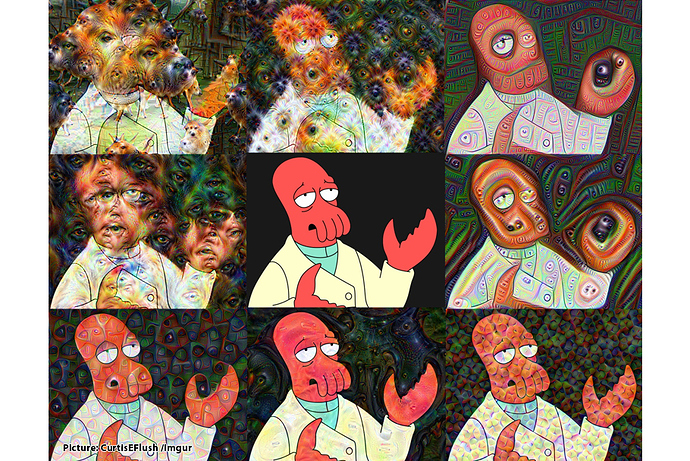