I’m just not sure that Spock could handle it.

No, sorry, not buying it. Hero myth story doesn’t excuse having another damn Death Star and a Darth Vader Clone. Whatever. I’ve seen this story already and I just don’t really care any more.

One of the bits where it goes too far. But wasn’t that basically cribbed from the EU anyway?

As for Kylo Renn. There’s a very clever thing there where Adam Driver is basically giving us the Anakin Skywalker we should have seen in the prequels. That’s fan service in a way. But its sort of flipped on its head in that he’s a hopeless wanna be who is kind of awful at most things. I think that’s deliberate, if not on Abram’s part then certainly on everyone else’s. Its actually one of the things I think is most refreshing about the flick. The major antagonist isn’t just some roving bad ass. Or kind of an anti-hero. He’s just a shitty person. And not like “holy shit he skins pony’s alive” banality of evil sort of way. He’s petulant. Not nearly as cool or intimidating as he thinks he is.

An annoying emo brat with mommy issues? Who wanted that?

An annoying emo brat with mommy issues? Who wanted that?

The Presbyterian Church did - at first! 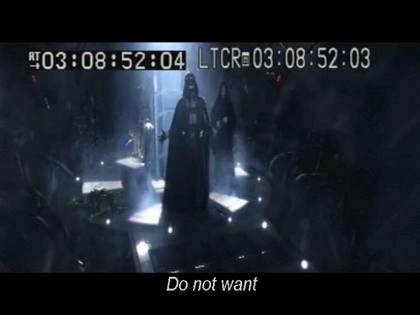 Star War The Third Gathers: The Backstroke of the West

There is literally nothing that will satisfy us in this sphere, y’all. Nothing a director can do will make us feel the way we did when we were four or six or ten years old, sitting in that theater seeing Darth Vader for the first time. That youth is spent. Out the window. Kaput. We are all going to die without experiencing that feeling again, no matter how bitterly we search for the perfect combination of complaints that will make the next movie somehow take us back in time to before we were jaded adults competing over who can be the most derisive of something that brings joy to children.

But “it rehashes the same shit over and over again” is NOT why I liked Star Wars in the first place!

No, we spent a decade complaining that they were complete crap as movies without redeeming value.

I really hate that criticism because its lazy.

It isn’t lazy, its a short summary of the issue with out a multi-paragraph diatribe.

The problems in the plot lead to a feeling of it being a bit disjointed and way too similar to the previous movies. Now the original Star Wars too had some issues, as most movies do, but everything moved along where your brain was fine with it during the movie. Not so with Awaken, where several times I questions “why is this happening” and “even in a world of space wizards and death stars, this is too unbelievable”.

Now, that isn’t to say I didn’t enjoy the movie, but really, you got the talent, time, and money, that the plot should be solid enough that no one but the most OCD/anal retentive person can read it and not have their brain screaming questions instead of enjoying the movie.

My complaint is less that the beats were similar - a simple “hero’s journey” story line is more than acceptable. In fact I favor simple stories with this sort of thing. But too much of it was too similar. It isn’t that the same plot line was followed, but the exact same circumstances were followed. I swear to god if I never see another desert planet in my life time in a sci fi movie, it will be too soon.

Yes, you are right, there are many differences, but IMO, there should have been more. One or two similarities would have been forgivable, but they started stacking up, thus the criticism.

Well there goes the rest of my interest in anything Star Wars related.

There is literally nothing that will satisfy us in this sphere, y’all

I dunno. There were advance rumours that TFA was gonna be about the search for Luke’s hand (!) which sounds awesome to me.

Separately I also really dug the possibility that Luke would turn out to be the bad guy. Either of those, done well, woulda satisfied me nicely

Though we all need to keep in mind that ultimately that George probably stipulated that the main series be made for the 6-12 set and reset our expectations appropriately.

That being said… Pixar has shown us that engaging content for children can be well written and impactful. I’m just not sure if that lesson has permeated out to the execs who don’t deal with Lasseter often.

Also, George Lucas was not a good judge of what kids found interesting storywise either. The prequels seemed like George writing things to match what he remembered liking as a kid, (which to him was apparently huge alien governments) instead of what he was actually good at (giant space battles and neat things that become neat toys).

So yeah. Also I agree with the above point about how Abrams is a better producer, which strangely is a similar criticism to what I just said about Lucas. He’s good at the spectacle and the flash, and there’s a lot of heart there, but ultimately he’s not as accomplished of a storyteller or portrayer of humanity.

I only had 2 major quibbles with Watchmen. No squid, and the fact that the fire rescue scene was supposed to be the opposite of an action scene (which they even coyly acknowledge if you’re paying close attention).

I liked the new Dawn of the Dead.

Sucker Punch was a mess, but it was supposed to be a big pile of crazy. If anything, I thought it wasn’t dark enough.

BvS, MoS so much fighting that the fighting loses all meaning. Snyder I suspect was watching a lot of DBZ at the time.

Didn’t see a few other entries that he directed, so there may be more to complain about. I thought Wonder Woman was good (but he didn’t direct).

Snyder is VERY good at set-pieces and things that look like comic panels through the movie lens.

I don’t think he’s very good at connecting these scenes into a coherent whole.

Interviews clarify that he’s not interested in actually understanding his source materials.

I’m fine with this. I think JJ truly understands the fundamentals and values of the Star Wars universe and franchise a lot more than he does for Star Trek, and for that reason I don’t think Episode 9 will be as much of a weird dissonant clusterbomb as Into Darkness was. I think TFA being so thematically, structurally, and stylistically similar to ANH was half an intentional decision to re-root the new trilogy in its 1977 origins, and half an imposition by the legions of people who spent literally the entire time between the film’s announcement and release writing think-pieces about how Star Wars is about the galactic outback and lopsided space battles of good against evil and awesome light saber fights and please please PLEASE no complex monologues about galactico-political power structures or tedious scenes of debates on the floor of the Senate. If you could somehow distill and bottle the original trilogy, pouring it back out onto celluloid would give you something that looks an awful lot like The Force Awakens, which I think is exactly the sort of thing the franchise and its fans needed, even if it didn’t give them everything they wanted. It’s a clear return to form; a proof that yes, Disney gets Star Wars.

I want to share the analysis of TFA done by Mikey Neumann (formerly of Gearbox Games) on his show Movies with Mikey, because I think it’s incredibly insightful, and because at the beginning he hits on something that @hawkeward pointed out: TFA was always going to be a movie that was essentially impossible to produce in a way that completely satisfied everyone. Yes, the film does have flaws, but it arguably succeeded in fulfilling as many of the varied and often diametrically-opposed expectations that were heaped upon it as anyone could reasonably hope to expect, and it laid the foundation for what could easily be a very different arc in the rest of the trilogy than that of the originals. Anyway, here’s Mikey:

That I can agree with. It’s definitely got some editing problems. Apparently because things are missing. Supposedly a lot of the “wha?” moments had clear explanations that were shot, in the original cut and excised for pacing.

Which is dumb. Sure you need to fix a movie that drags. But to cut out entire sub plots, leaving plot holes is just bad.