I’m excited about this because I wanted to get a sous vide device, but the wireless aspect of it troubles me. Is this going to be doing a DDOS attack on Blizzard the next time they change a WoW class?

So Joule and Alexa are going to hook up, probably invite Roomba to the party, Nest will turn the light down low and the smoke alarms off, Powerwall will push a bit more voltage to that hoverboard in the garage…and the robot uprising is upon us.

I received one of these as a gift. I think the idea of no controls on the device is a little weird, but it does allow the device to be very compact and completely sealed unlike some other brands which I’ve read about online that have failed with exposure to steam. It is much smaller than an Anova, check out the lifehacker review to see a direct size comparison.

Sous vide is pretty cool. You don’t really need a vacuum sealer either, so the cooker is the only real investment to make. 36 hour brisket is about the best I’ve had (and I live in central Texas).

Have you seen the youtube channel for these? https://www.youtube.com/channel/UCxD2E-bVoUbaVFL0Q3PvJTg I love that guy.

If you’re a maker. Make one yourself with a crock pot and a 16 dollar controller.

This is what I have it works fine. http://www.instructables.com/id/Sous-vide-cooker-for-less-than-40/

The hardest part was drilling the openings in that enclosure. So you might want to find a better enclosure/project box thingy.

And if you’re not comfortable with making stuff. There’s a basic temp controler that’s about 35 bucks.
You still will need a crock pot…which I found at a thrift store for 8 dollars. 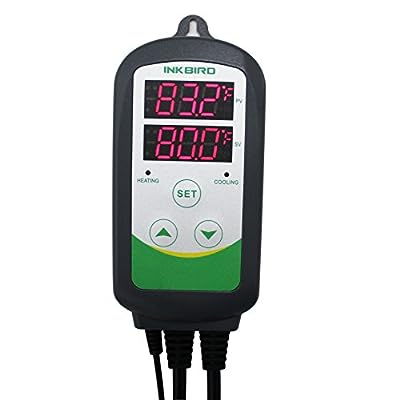 Main features: Plug and play design, easy to use; Dual relay output, be able to connect with refrigeration and heating equipment at the same time; Support reading with Centigrade or Fahrenheit unit; M ...

I don’t have the Inkbird…but did the cheaper maker option.

If you’re a maker. Make one yourself with a crock pot and a 16 dollar controller.

I generally only make things that I can’t buy.

Have you never made a pie? A Hamburger? A boiled egg? Because you can buy those.

I’m SO glad this is available. We urgently needed more kitchen gadgets. We were running out of things to fill our nearly empty cupboards and drawers.

The parent site is economical with information, seemingly pointed at non-technical types and intended to discourage those who are. The Joule isn’t a toaster and sous-vide isn’t browning bread.

I’m with Sam Winston on this. Grab an Inkbird controller and run a slow cooker with it for $70-80 total.

A $35 coffee urn, such as this one from Amazon works much better than a crock pot. I initially used an arduino-powered box with a crock pot, but it took forever to come up to temperature and couldn’t do higher temperature items that need to be at 80+ degrees C. The coffee urn heats up in a few minutes, can come to a full boil if needed (if you remove the warmer coil), and the natural convection means that you don’t need a pump or bubbler.

Each to their own, but my personal “would not buy” breakpoint for a gadget like that would be about ten bucks.

It’s far more useful than other kitchen gadgets. I have this same device and I use mine almost everyday. It’s as revolutionary as the microwave in my opinion. Also it takes up little space. It’s the size of the paper tube in a paper towel roll, plus a power cord.

It’s easy enough to convert any plastic tub into one the magnetic foot can be used on. You just glue a large metal washer underneath. Having the magnet by far beats using the clips of other devices in everyday use.

The people here telling others to build their own don’t know what they’re talking about. Joule is an appliance that’s designed for ease of everyday use, not just a means to an end. Maybe if you only cook sous vide a few times a year would a DIY solution be tolerable. However, no one who cooks sous vide regularly would consciously choose a DIY solution over Joule or other recent competitive devices, especially since the price of $100-200 is completely reasonable for what you get.

Back in 2010 when the only options were the PolyScience device for $800 or the $500 Sous Vide Supreme, sure making your own was a smart way to go. Now the only reason to build your own is to do it as a DIY exercise. You’re not saving that much money, and you’ll have a far inferior device.

I’ll take your word for that. We already have kitchen full of devices designed for adding heat to food.

One of the appeals of SousVide for me is it’s ability to transform cheaper cuts of meat into something amazing. I don’t have much of a disposable budget right now and a 199 gadget is out of the question, but a 16 dollar part and wires and plugs from my junk draw was doable.

It’s been well worth it with it’s ability to turn a cheap steak into something special. Right now I have 4 beef short ribs (9 dollars from discount supermarket) in 145degree bath to go for about 36 hours.

I will most likely get a premade sousvide stick thingy when I have a job again.